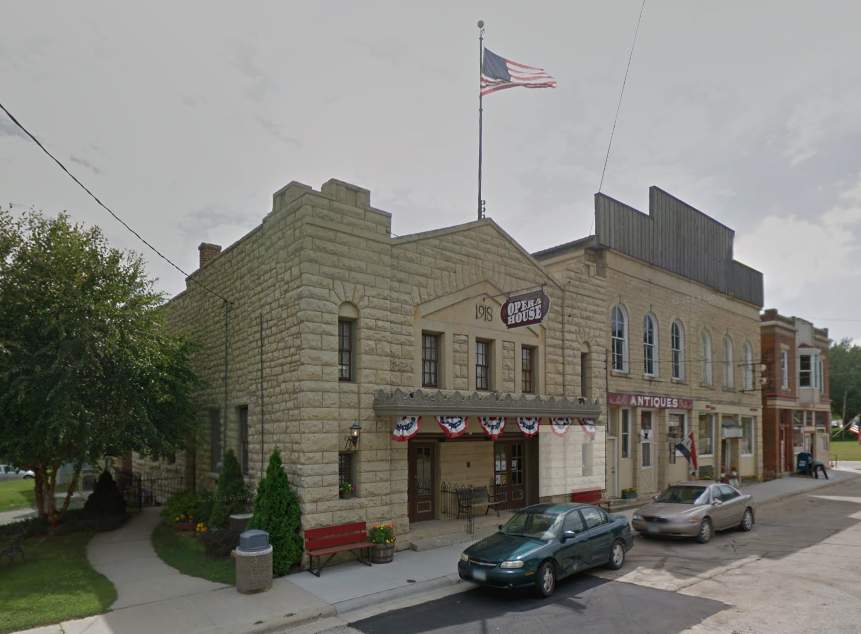 If you don’t know history, Mantorville, Minnesota seems an unlikely place to have an opera house. This small town of roughly 1,200 people is located about 70 minutes’ drive south of the Minnesota State Capitol and 25 minutes west of Rochester. It is the seat of Dodge County (estimated population, 20,200), whose largest city, Kasson, today claims about 6,000 inhabitants. Given the proximity of Rochester – then, as now, a much larger city – what would have lead a small town like Mantorville to fund an opera house in 1918, when its population hovered around just 400 residents?

This article is Part 4 of the Daily Planet’s Opera Week coverage, a series of articles about opera in Minnesota leading up to the opening night of The Elixir of Love. Over the course of seven days, our coverage will examine some of the individuals and organizations that write opera, produce it, and perform in it in the North Star State. You can read Part 1, Part 2, and Part 3 online.

The answer has much to do with transportation. Railroad-building boomed in Minnesota after the Civil War, when Dodge County was a magnet for immigration and fast-growing Mantorville was expected to rival Rochester. (Duluth, at the time, was the fastest growing city in the United States and expected to displace Chicago as the Midwest’s largest city – something that also didn’t work out as expected.) The growth of railways dramatically cut inland transportation costs, making it economical for theatre troupes, vaudevilleans, and opera companies to reach far-flung communities. Many of the state’s new residents had come from European towns with their own theatres and opera houses, and erecting an opera house or theater was considered a landmark of economic and cultural achievement. By 1883, a national guide to opera houses listed a dozen such venues in the state (Red Wing’s opera house had burned down the previous year) and numerous smaller halls and theaters that could be used for such purposes.

As with many immigrant inflows, however, the drive to acquire land and engage in farming dispersed much of the new population. Many arrivals came to towns such as Mantorville to seek employment and get acclimated, only to leave and seek out land to purchase and develop farther afield as they acquired the means. For a time, the state’s booming lumber industry left ample clear-cut forestland that these settlers converted into pasture and farms, fueling the state’s agricultural boom – and preventing the more focused growth that Mantorville needed to grow into a city. The peak of the state’s lumber industry around 1905 coincided with a decline in the town’s population – an event that, then as now, created problems with tax revenue and maintaining public services.

A fire that swept through the town center provided Mantorville with an unexpected catalyst for rebuilding – and for creating a new public infrastructure that would draw county residents into town. A public fundraising campaign financed the construction of a new 150-seat theatre, which took the name Mantorville Opera House. The name is not entirely a misnomer – this was the size of many small-town opera houses in Western Europe – but also a statement of the community’s aspirations. It was not the largest of spaces, but the sort that small traveling troupes and early-career performers could hope to fill, and it looked more respectable on a playbill.

The growth of cinema was not kind to the Mantorville Opera House’s longevity as a home for live performances, but in its more general role as a public gathering space the building was successful. Since its opening, the Opera House has variously served as a mixed-use live and movie theater, a bingo parlor, City Hall, a dance hall, bar, and even a roller rink – all attractions that brought people from outside the community into town, if not quite as originally intended. Then, in 1970, the Mantorville Theater Company (a community theater organization) took up residence in the Opera House and repurposed it again for live performances. For extra spice, rumors persist that the Opera House is haunted, but so far this has attracted more visitors than it’s scared away.

Today, the Mantorville Opera House is a community fixture, hosting eight MTC theatre productions per year. Last year’s performance of Lend Me a Tenor is perhaps the closest it’s been in a long time to hosting actual opera – the upcoming performance of Church Basement Ladies isn’t quite the same – but the building lives on. More to the point, the Opera House is still an active gathering point for the smaller and larger community.