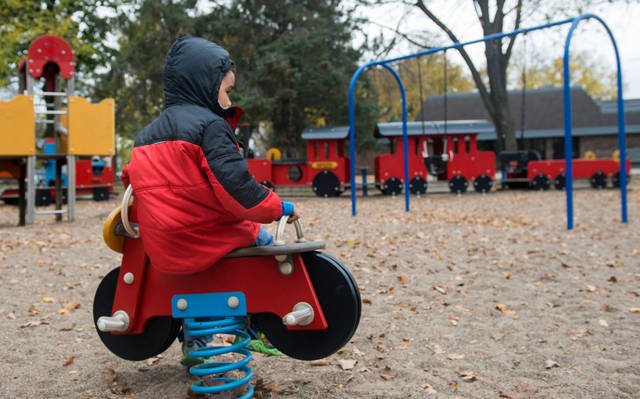 (Photo by Cora Nelson) A child sits on a toy bike at Van Cleve Park on Oct. 30, 2014. The park board superintendent’s proposed budget allocates about $300,000 to the park in 2020 to help improve its facilities.

A breezy fall day had Megan Swenson strolling through the Southeast Como neighborhood’s Van Cleve Park with her dog, enjoying the green space and playground.

She was surprised to learn that the recreation space may not be the same in a few years.

The Minneapolis Park and Recreation Board is preparing to make improvements to its parks — including Van Cleve — beginning early next year, a process that will extend through 2020. The multimillion-dollar plan aims to revamp deteriorating parks across Minneapolis, although some park users say the University of Minnesota-area Van Cleve doesn’t need the updates.

Community members had a chance to voice their opinions Wednesday during a public comment period regarding Park Board Superintendent Jayne Miller’s proposed budget.

Many turf athletic fields are falling apart, Miller said, which is just one example of Minneapolis parks’ dilapidated features.

The superintendent’s budget allocates $306,495 to Van Cleve in 2020 to make improvements to its playgrounds and site. An ongoing project to reconstruct the park’s wading pool will use half a million dollars.

But some students who frequent parks like Van Cleve say they don’t support the spending in the budget proposal, which relies on a 4 percent property tax hike.

Swenson agreed that the park isn’t in need of repair and said she’s skeptical of the superintendent’s plan to increase the budget.

“I would question where the money is coming from,” she said.

Miller said the board intends to use money from last year’s budget to consult with local community members and determine their opinions on the changes that she said need to be made.

Each park amenity has a specific life span, she said, and many of those have timed out, so it’s time for park improvements regardless of community sentiment.

“It’s a balancing act,” Miller said, noting that she has a duty to take into account both the public tax burden and the maintenance requirement for Minneapolis parks when making
decisions.

She said she expects to receive some pushback from the public over the tax increase.

Community members will be able to attend two more public comment sessions this month before the proposal is up for approval in December.

The suggested spending on park amenities is addressing a backlog of underfunded capital projects that is growing, according to a park board presentation. From 2000 to 2014, there were about $110 million in projects that weren’t funded.

“Every year we add another year,” she said, “because we will always have capital improvements we need to make in the parks system.”