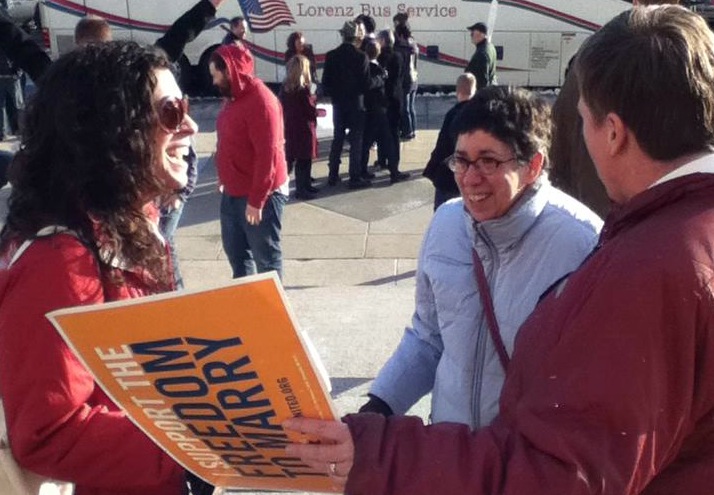 About 2000 people gathered in Saint Paul on Valentine’s Day to advocate legalizing same-sex marriage. The faith-led event opened with a 150-person clergy procession, followed by faith leaders, House and Senate members speaking to the diverse crowd.

February 14 was the symbolic date for the Freedom to Marry Day Rally because “Valentine’s day is a time that you celebrate people you love and that sort of commitment to relationships in your life, and that’s the reason we’re pushing to change state law this year,” said Jake Loesch, communications director for Minnesotans United for All Families.

Last November, the proposed amendment to define marriage in the state’s constitution as between one man and one woman was voted down by 53 percent to 47 percent.

“Faith is divided on this,” said Loesch, but “We would not have been able to defeat the amendment last year without faithful, religious Minnesotans, clergy members and churches.” 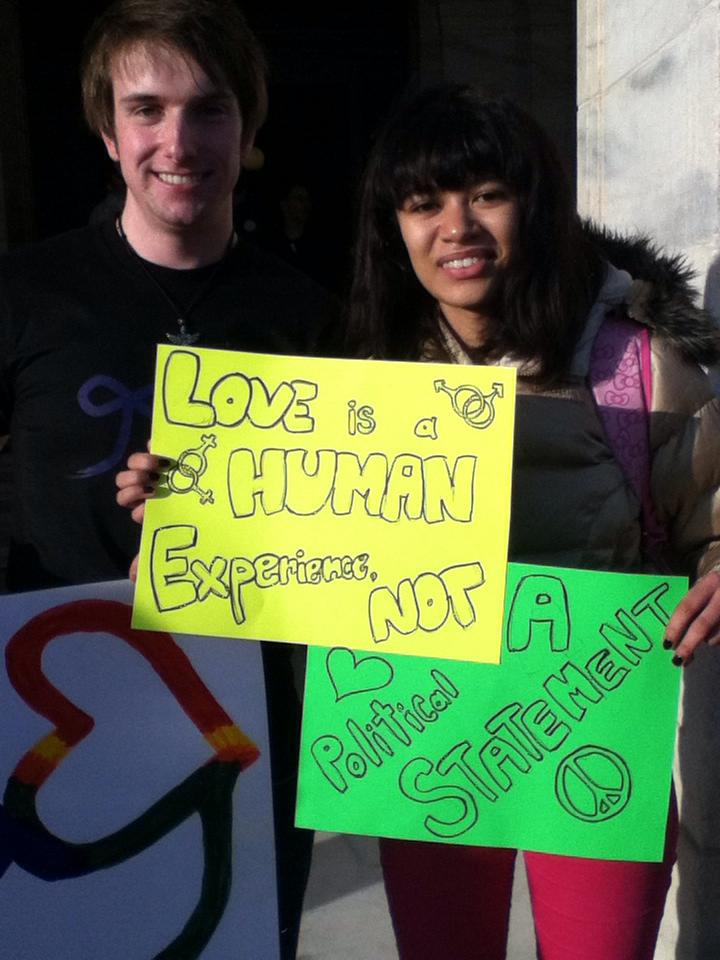 Various church groups showed support inside the Capitol rotunda, such as United Methodist, White Bear Unitarian Universalist and United Church of Christ New Brighton.
Rev. MacArthur Flournoy, Human Rights Campaign Deputy Director of religion and faith programs said, “There can be no better day than today, a day where we celebrate love, that we can stand on the principles of faith, justice, and equality.”

Rabbi Melissa Simon of south Minneapolis Shir Tikvah Congregation said, “In the eyes of Judaism, marriage brings couples closer to our heritage and traditions of our faith.”

But not all groups, religious or non-religious feel this way.

Marriage for Minnesota recently posted on their Facebook page saying, “Marriage isn’t a ‘love license’ from the state! It’s about a PERSONAL promise with a PUBLIC purpose that benefits everyone–especially kids, parents, and our state’s economy!”

Although the amendment was defeated, maybe not all who voted against it are necessarily ready for extreme reform.

KSTP and Survey USA polled 500 Minnesota adults through a recorded voice server on telephone and electronic device questionnaires Feb. 1-5, asking if the state marriage law should be changed allowing same-sex couples to marry. Results showed 42 percent in favor of change, 54 percent to leave the law as is and four percent not sure (results had 4.5 percent margin of sampling error). 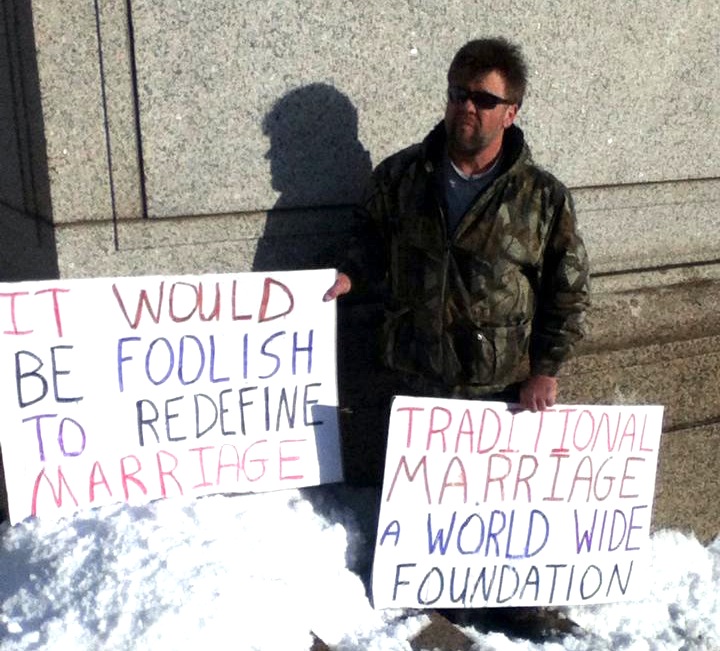 Patrick Dolney, standing with his posters at the Capitol opposing same-sex marriage

Patrick Dolney, standing on his own outside the Capitol with two signs, one reading “It would be foolish to redefine marriage” said it troubles him to see groups rallying for equal marriage.

“Our foundation is based upon the traditional family, and these traditional values are being hammered,” said Dolney. “We’re going down a direction we’ve never been before. It’s not hatred towards gays, don’t misunderstand why I’m here. It’s just the change. The redefinition of marriage is a big deal. It’s a really big deal.”

When it comes family and children, many opponents stress the importance of tradition and of having both paternal and maternal parenting roles.

Young children and youth were present at the rally. Friends Sienna Schuth and Thomas Stargo both came carrying colorful signs with special people in mind.
“I have so many friends and family members who this directly impacts,” said Schuth. “It’s really empowering to see so many people who really care and want to make equality happen.”

This is Stargo’s first Freedom to Marry rally and, he said, “hopefully it’s my last.”

Minnesota representatives Karen Clark and Susan Allen, and Senator Scott Dibble all shared personal stories and struggles, and encouraged the crowd to share stories of their own to legislators after the rally.

Two almost-six-feet-tall Valentine cards meant to be given to the speaker of the House and Senate majority leader stood on both sides of the room for everyone to sign, expressing support for same-sex couples.

According to Loesch, the next bill introduction deadline is in March, when Minnesotans United hopes to introduce a bill that could potentially be worked through committee chairs in the House and Senate. The first Freedom to Marry rally was about five years ago. This year, Minnesotans United worked with OutFront Minnesota and Project 515 to organize the rally.

Same-sex marriage supporters rally on Capitol, bill expected to be introduced to the Senate in the coming weeks