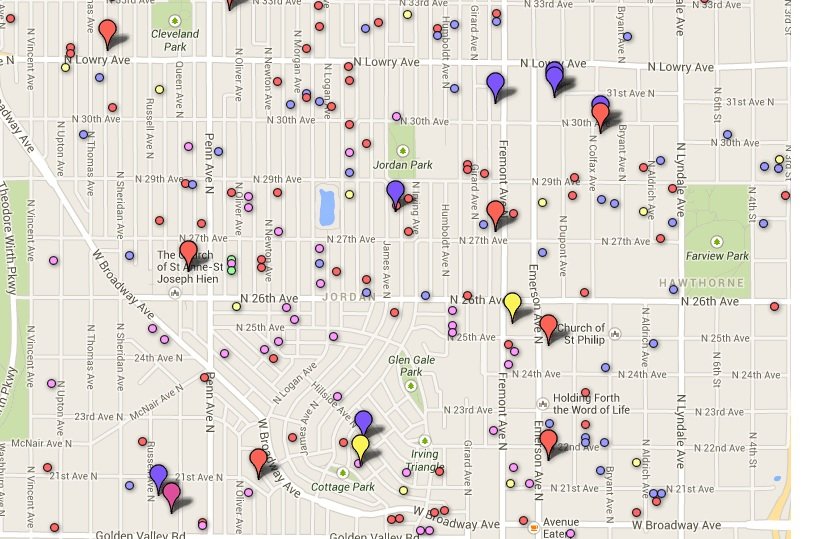 When it comes to the housing recovery in north Minneapolis, there’s a tool in our collective toolbox that we haven’t been using. In impacted areas, or at the city’s request, Hennepin County can accelerate the tax forfeiture process so that vacant properties can go into forfeiture after as little as one year of delinquent taxes. I found out about that opportunity just before I left my job at Hawthorne. I can’t help but wonder how much farther along my old neighborhood would be if I had known about this process and utilized it from the start.

Thankfully, I don’t have to just wonder. By comparing the current boarded/vacant list and the properties for sale on the MLS in Hawthorne, we can get a pretty good idea.

There are seventeen properties listed for sale on the MLS in Hawthorne as of today. There are fifty structures registered as boarded and vacant in Hawthorne as of July 1, 2013. Not all MLS or VBR structures are residential, and it’s possible that there is some crossover in that some of the houses for sale may be vacant. Still, in a housing market that is currently starving for inventory, the potential is there to almost triple the number of available properties in Hawthorne.

Digging a little deeper, the median time that a property has remained vacant since being registered as such in Hawthorne is two years and five months. Out of those fifty vacant structures, two are known to be in the midst of rehab by private developers. Nine are owned by non-profit developers, and eight of those have rehab work that is expected to either finish or at least start in the foreseeable future. Five are already in tax forfeiture, two are owned by the city, and one by HUD. At least five are bank-owned. Two are owned by Mahmood Khan, and the last two worthy of mention were purchased from the county and have not had their VBR status removed by the requisite one-year deadline. Hopefully the county is taking them back from inattentive or predatory owners.

Twelve properties are more than one year behind on taxes, and could immediately fall into an accelerated tax forfeiture – in fact, those twelve should have already had such attention. An additional nine are 6 – 12 months behind and could be swiftly added to the roll if the delinquency continues.

In the Jordan neighborhood, the numbers are even more stark. There are thirty-three properties on the MLS and ninety-one on the VBR list. Housing committee members and other volunteers have canvassed the community extensively, and we have identified a total of one hundred fifty-seven structures that appear to be vacant. There is a plethora of data to go with that, which I haven’t had the time to sift through. But it’s a reasonable conclusion that we’ll find some homes in the rehab stream already, and quite a few in VBR purgatory.

We are moving out of a housing crisis and into a housing recovery. Buyers are eagerly looking for homes, and not finding enough. The private market is poised to play a much larger–and healthier–role in north Minneapolis than it has in a long time. Our city and county should have been collaborating with each other to put our community in a position to benefit from these current trends, but they have not done enough in that regard.

Image from a Google maps compilation of vacant properties, put together by Chad Davis.