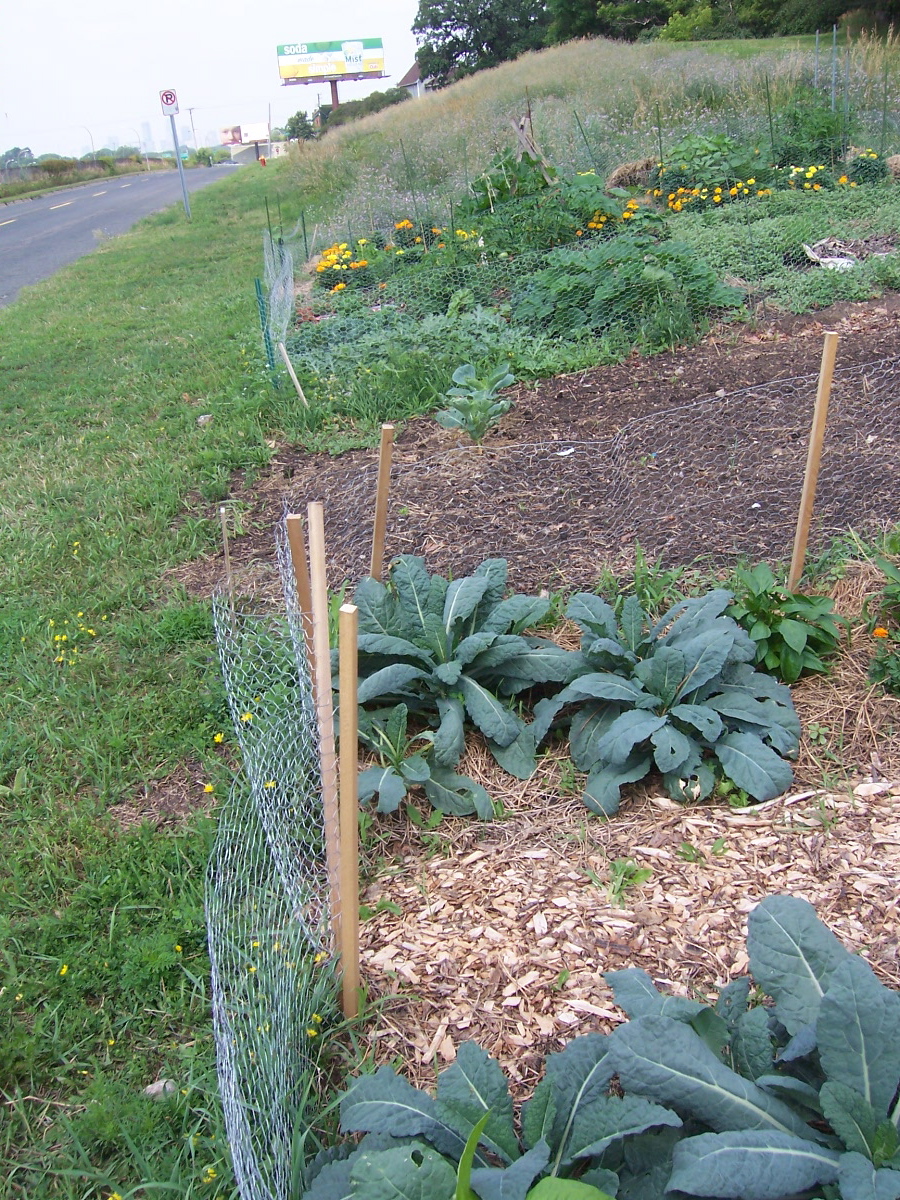 Just five weeks after the Merriam Station Community Garden broke ground at its site on Prior Avenue and Gilbert Avenue, 33 active gardeners’ plots are bursting with summer growth.

Located in the Union Park neighborhood of St. Paul, the garden is bordered by Interstate Highway 94 to the South and railroad tracks to the north.  It’s the kind of hidden urban gem that you really have to be looking for in order to find, but once you find it, you’ll definitely want to explore. 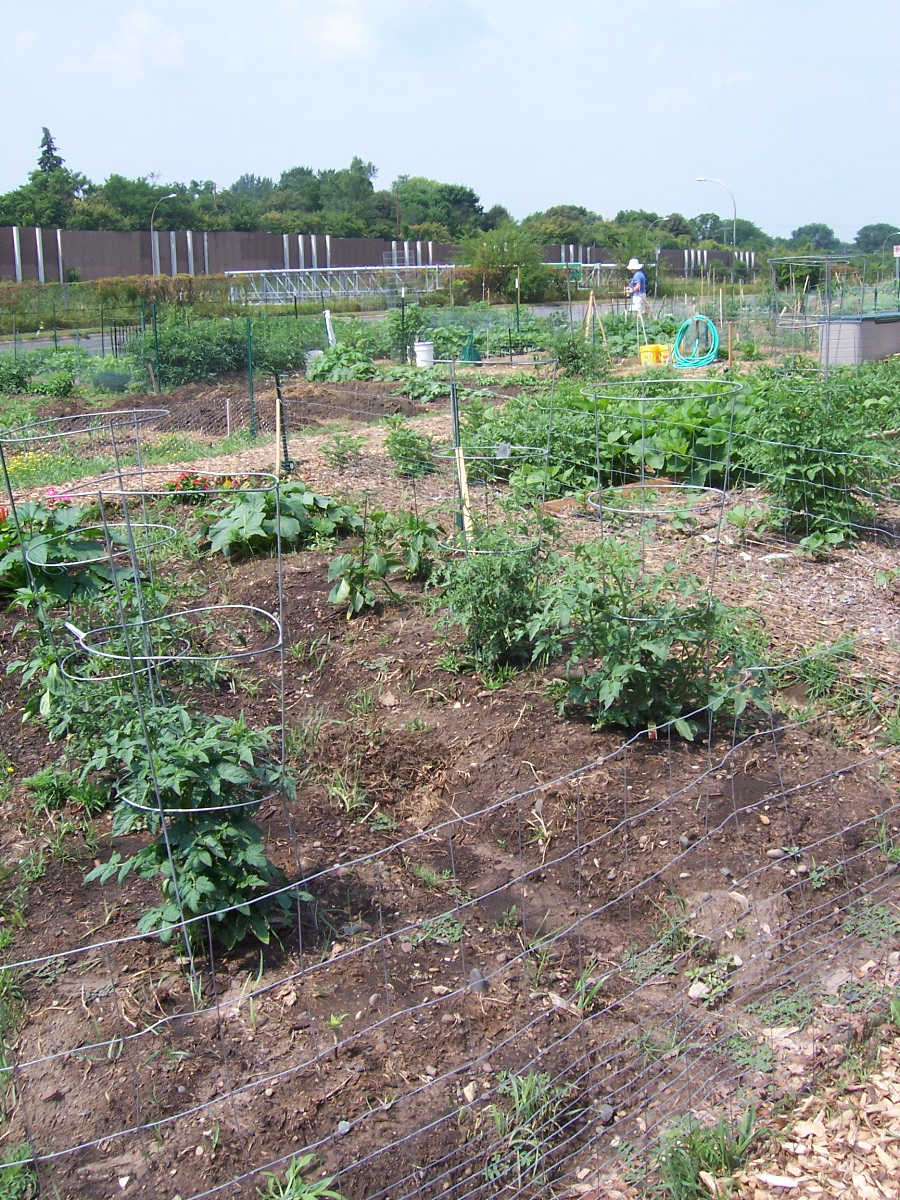 Decades ago, houses sat here.  Eventually they were demolished to make way for the highway.  The vacant land was left to become a refuge for crabgrass, discarded couches, billboards, and a Metro Transit turnaround for buses.

Two and a half years ago, the City of Saint Paul called the president of the Union Park Neighborhood Association to ask if the group was interested in developing a new garden, pitching the site as a possibility.  The group, already busy with a community garden called Eleanor Graham on Hamline Avenue and Ayd Mill Road, declined.  In spring of 2011, they reconsidered.  The Hamline Avenue bridge crossing Ayd Mill Road had been slated for reconstruction, leaving the future of Eleanor Graham in limbo.  The current 35 plotholding families would not be able to garden for a season or two starting in 2013.

A group of interested individuals from Eleanor Graham and various St. Paul neighborhoods came together and contacted the Minneapolis-based nonprofit Gardening Matters, which supports efforts to increase local food production, to host a workshop on how to start a community garden.

Out of this meeting in April 2011, a core group of around a dozen people began to meet regularly.  They began to scout out sites throughout the neighborhood, most of which were along either I-94 or Snelling Avenue.  “There weren’t many good spots,” organizer Jeffrey Zeitler recalls. “This was just a huge, neglected plot of land that was in many ways ideal for a community garden.”  In the end, the Prior/Gilbert site was everyone’s favorite.  It is an 800 by 80 foot site with full sun and easy access to city water. 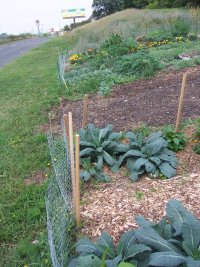 The process of starting the garden required patience and hard work.  For a short period of time, the City of Saint Paul and the Minnesota Department of Transportation (MNDot) were not sure which entity actually owned the land.  No one was sure what the future of the project would be.  Eventually, they established that MNDot, the owner, would lease the land to the garden.  The City of Saint Paul would provide the water.  Organizer Tanner Larsen commented on how helpful Saint Paul has been throughout the process:  “They really see it as a mutually beneficial opportunity to have us there to maintain the space, so they have tried to, they extent they could, to take down barriers to the garden.”

As soon as the group got permission to go ahead with the project on June 5, they immediately held a work weekend on June 9, during which they dug a 500-foot long trench to connect the water to a hydrant, laid paths, then demarcated and tilled plots.  Throughout the workdays and the everyday work of planting, weeding and watering, gardeners have gotten to know one another and develop a sense of camaraderie.

In the next few years, gardeners hope to expand the number of plots from 35 to 80, terrace a hilly portion of the land, build a tool shed, plant a perennial garden, and create a play space for children.  Larsen reflected that beyond this specific space,  “My ultimate vision is that everyone who wants a plot in a community garden can have one.  In my experience there are many more interested gardeners than there are available plots.  I’ve talked to people who’ve been on waiting lists for community gardens for years.”

Jeffrey Zeitler reflected on the process, “We came to this with no special knowledge.  I’d never started a community garden before.  Nobody had.  So if we can do this, just about anybody can.  We were lucky.  We had a lot of very dedicated people, a lot of different talents, and we got it done in a year.  Since it came together it’s just been wonderful.  It’s the most uplifting feeling.”

The Merriam Station Community Garden welcomes visitors to come tour the site.  On August 11, gardeners will be present to talk with visitors as a part of National Community Garden Day.  For more information on the garden, contact mscg@unionparkdc.org or visit their website.