When DFL legislators approved language that supported the improvement of bee habitat in Minnesota, the House Republican Caucus ridiculed this action as frivolous “DFL waste.“

But as many Minnesotans noted, bee colony health is deeply linked to human health, and our pollinators are in trouble. As Ag chemicals impair honey bees: Study, a recent article in Iowa Farmer Today suggests, the causes of colony collapse and bee death are complex, but while crops need pollinators, the bees themselves are being nourished by other plants:

In an unexpected finding, most of the crops the bees were pollinating appeared to provide their hives with little nourishment. Honey bees gather pollen to take to their hives and feed their young. But, when the researchers collected pollen from bees foraging on native North American crops such as blueberries and watermelon, they found the pollen came from other flowering plants in the area, not from the crops.

The recent memo from the USDA notes:

. . . Pollinators are essential to the production of an estimated one-third of the human diet and to the reproduction of at least 80 percent of flowering plants. Insect-pollinated agricultural commodities result in significant income for agricultural producers and account for over $20 billion in annual U.S. agricultural production. Honeybees, the predominant animal pollinator for United States agriculture, require an ample and diverse supply of pollen and nectar to thrive. 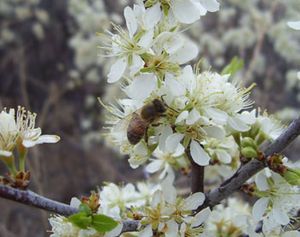 CRP provides millions of acres of vital habitat for honeybees, and has since 1986. CRP is viewed by numerous stakeholders in the pollinator community as providing essential habitat in a landscape that has been rapidly changing often in ways that depleted habitat well suited for honeybees. A large concentration of CRP land has been located in the upper Midwest and Northern Plains where perhaps as many as 50 percent of the nation’s honeybee colonies spend the summer, after providing pollination services in the south and in coastal regions. Traditionally, CRP acres, with their abundant acres of legume rich forage, have offered the hives a safe haven from the pressures of modem agriculture and have provided larger-scale, natural sources of pollen and nectar essential to healthy brood rearing needed to sustain colonies throughout the year. . . .

Photo: Bees in an apple tree