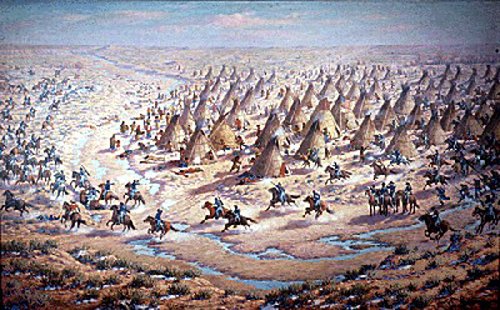 AP — The United States government has flatly denied accusations that its military used excessive force or targeted civilians during its attack on what it says was a terrorist encampment along Sand Creek in the Colorado Territory.

“Like all nations, the United States reserves the right to defend itself,” declared Col. John Chivington of the U.S. cavalry, during a hastily arranged press conference in the territorial capitol of Denver City. Chivington led 700 soldiers from several units against an estimated 200 Indians. During the battle as many as 180 Arapaho and Cheyenne Indians were killed. Some two-thirds of those killed were woman and children, including many infants. American losses were 24 dead and 52 wounded, a high percentage of which, witnesses report, were the result of friendly fire.

The U.S. maintains that the attack, which took place under the code name “Manifest Destiny,” was in response to repeated instances of arrows fired by Indians into the United States. Chivington pointed out that many Plains Indians, including members of the Arapaho and Cheyenne tribes, have persistently denied the right of the U.S. to exist on land the Indians claim as their own.

“We regret the loss of civilian life,” Chivington said, displaying a wound on his forefinger that some say was self-inflicted while the Colonel was scalping a female Indian. “I put my own and my soldiers’ safety at risk in order to spare non-combatants. The United States is the freest, most democratic country in the world and we are facing enemies who are little more than savages.”

Chivington cited his own background as a Methodist minister and longtime foe of slavery as evidence of what he termed “the moral superiority” of himself and the U.S. military. He also stated that he believed many of Indian bodies recovered from the site were, in fact, individuals who were already dead before the battle commenced.

“These terrorists like nothing better than to put on a display of photogenic corpses,” he said. “They will stop at nothing in their blatant attempts to sway world opinion.”

The heavy civilian casualties, he explained, were the result of terrorist Indians firing weapons on his soldiers from densely inhabited areas of the encampment.

“We are facing an unprincipled foe,” Chivington said. “Cowards who hide behind human shields – and sometimes shields made from buffalo hide. The Arapaho and Cheyenne have no one to blame but themselves for what happened.”