Farmers and the insurance industry have one thing in common: they are both on the front lines of climate change. So far, the U.S. insurance industry has been slow to respond to climate induced risk and is well behind its European counterparts who are outspoken leaders for climate action.

In a small sign of progress last month, Minnesota announced that it will join four other states in requiring its insurance companies to report on climate risk. The companies will have to respond to a survey put together by the National Association of Insurance Commissioners that asks how the industry is reducing its own greenhouse gas emissions, altering its investment strategies, or encouraging policyholders to adapt to new climactic conditions (thus decrease reporting company losses).

Minnesota Insurance Commissioner Mike Rothman should be applauded. When IATP met with the insurance commissioner’s staff last year, we encouraged the state to require climate-related reporting of insurers. We were surprised when they told us we were the first to ask them to do such reporting, or indeed, to ask about the climate risk of Minnesota companies. Maybe insurance commissioners in the other 45 states also just need to be asked in order to act.

The social costs of climate change in the U.S. are staggering and difficult to truly assess. A 2008 analysis by Ackerman and Stanton conservatively forecasts U.S. business as usual policies on climate to cost $271 billion by 2025 for repair of hurricane and flooding real estate damage, and energy provision and water provision to increasingly drought stricken areas in the United States. By 2100, the cost to the U.S. economy of the current business as usual policies would likely rise to $1.9 trillion annually, absent a major change in how the government and businesses adapt to climate change and reduce greenhouse gases. 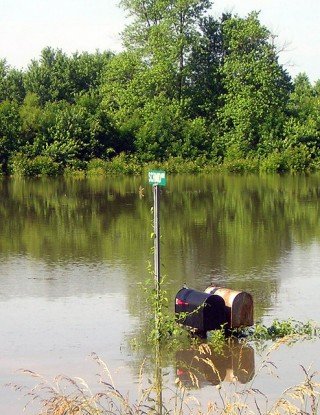 One segment of the industry where we’re already seeing rising payouts is crop insurance. Last year’s drought is expected to result in a record $16 billion in crop insurance payouts. An IATP report last year called on Congress to invest in conservation programs in the next Farm Bill to aid farmers in building climate resilience on the farm, and ultimately to reduce crop insurance payouts in the future. USDA is trying to respond to increased climate risk, based on its own sobering analysis of the risks to agriculture, including creating some new “climate hubs” for direct research on expected impacts of climate change on the sector. Unfortunately, Congress has not yet agreed to treat climate change as seriously as either USDA or the Minnesota Insurance Commissioner.

Responding to a survey about climate change is a good first step to require of the insurance industry. According to CERES, an association that advocates for more sustainable business practices, only 23 of 184 U.S. insurers have comprehensive climate strategies; more than half of those are foreign-owned.

Sure, an industry that exists specifically to reduce risk can and must do more to acknowledge the reality of the problem. Incentivizing climate resiliency with their clients and advocating for strong climate policy that reduces emissions and supports needed adaptation measures are some first steps. If insurance companies cannot induce their corporate clients to reduce their climate-risk exposure, climate change feedback loops governing drought, sea rise levels, ocean acidification, etc., will become unpredictable. As a result, the actuarial tables used to calculate climate-related insurance premiums could become unreliable to the point where companies will not write insurance policies without huge taxpayer guarantees. At that point, we may look back nostalgically to the time when crop insurers paid out a mere $16 billion to cover crop losses.