On a lovely spring evening over 100 people stayed inside to listen to five educations experts talk about education policy in the Twin Cities schools. Participants did not give up the great weather for a dry policy wonk debate. Instead, they were treated to a spirited and civil panel discussion sponsored by the McKnight Foundation and the Urban Education Institute (UEI) at the University of Chicago.

The May 14 event, titled “The Future of Urban Schooling in the Twin Cities,” was held at the Walker Art Center in Minneapolis and focused on empirical knowledge about what McKnight president Kate Wolford said will help our community’s and our nation’s educational institutions “raise the bar and close the gap” in education.

The panel included practitioners in educational leadership who outlined their priorities to transform what event moderator and senior director at the Urban Education Institute Sara Ray Stoelinga characterized as an attitude held by parents, educators and media that “breeds a sense of hopelessness and failure” into a belief that all children can learn.

Unlike many discussions on education, the focus was not on what is happening to our kids. What our educational institutions do for school children is the ultimate concern, but the panel emphasized a focus on critical success factors that are under our control. Instead of focusing on what we are trying to get kids to do, the focus of adults need to be on how teachers, administrators and parents take responsibility for success.

Dr. Timothy Knowles, John Dewey Director of the University of Chicago UEI drove home this point, saying, “We need to make schools great, interesting places for adults to be. … We have to focus on making schools interesting places for adults and children, moving toward creating professional working conditions where teachers are treated well,” in order to make successful schools, he said.

Knowles was joined by three other panelists, Dr. Valeria Silva, Superintendent of Saint Paul Public Schools, Bernadea Johnson, Superintendent of Minneapolis Public Schools, and Randy Koch, Principal at Earle Brown Elementary and International Baccalaureate World School in Brooklyn Center. Knowles and the other panelists spoke of the challenges facing education in terms of the challenge of human capital. In addition to Knowles’ assertion that teachers need to be seen as professionals, the discussion revolved around the need to support, retain and prepare socially and professionally competent teachers.

“Teachers are not prepared (in university education programs) to work in urban schools,” Sylva told the crowd. She, like others on the panel, referenced the disparity between what is provided students of color and those from majority populations. “We have a civil rights issue,” she said. “We can’t say that every African American male can only achieve at the 33rd percentile and that one third of African American kindergarteners get suspended.”

The research and practical evidence shows that this lack of success need not be the norm. Knowles pointed to the University of Chicago’s charter schools where rates of high school students on track for graduation grew from 55 percent to 72 percent. 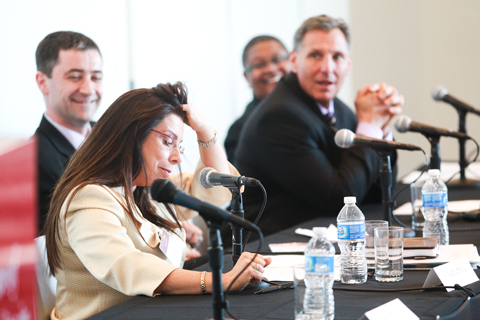 How do we get better results in urban schools that are increasingly populated by students of color? Superintendent Johnson said, “It’s about the people; it’s not about the program. The program is not the silver bullet.” She emphasized an important goal she has for the district: a great teacher in every classroom. The pipeline for the teaching profession needs to provide quality. She is a proponent of alternative licensure for teachers. “I want great teachers, regardless of where they come from,” she said, stressing quality preparation and accountability.

In St. Paul, Superintendent Silva said that they are putting first-year teachers in co-teaching situations. Instead of sending them off to fend for themselves in the classroom, SPPS is pairing them with confident, successful veterans.

Knowles said that we need to look at the higher education institutions—reporting to the education system on the pipeline where they are creating great teachers; recognizing those places that create those successes; and transferring their knowledge broadly to other institutions. Preparing better teachers, choosing the best and creating an atmosphere of professionalism will stem the 50 percent rate of teachers leaving the profession in their first five years. “People stay if you support them well,” he said, pointing to a 96 percent retention rate in schools on the South Side of Chicago.

Both Knowles and Silva also asserted the necessity of “counseling out” teachers who are not effective.

Principal Koch said that efforts have to be campus-wide, and that they need to start with pre-school teachers and students. These are critical years for children. One of the reasons for the hopelessness is, “We don’t trust what is coming out of pre-K.” In his school, he has included the pre-school staff in the same professional development as the K-6 teachers. Impressing this professionalism at this level has led to some of his pre-school students outperforming kindergarteners and created a better prepared incoming class of five-year-olds.

Last, the issue of cultural competence is a big factor. Central to being prepared to teach in an urban school is the ability to interact with non-majority cultures. Silva said that a teacher has to ask her or himself, “Do I feel uncomfortable when a student stands up, speaks loud and becomes ‘Hispanic?’”