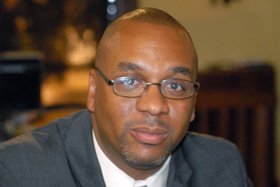 A national outbreak of tense and unfortunate collisions between citizens and law enforcement has formed a drumbeat calling for solutions to relieve the taut climate.

Scott Gray, Minneapolis Urban League president, is driving several angles of common, innovative and successful solutions in his five-year tenure of leadership. His perspectives on recent high profile collisions locally and nationally are both keen and mutual to many, if not most, young African-American men. Mutual, in that Gray recalls fond memories of walking down the middle of the street, as many of us do in the exploration of youth.

“I can’t wear a suit and tie all the time,” expressed Gray in amused resignation, noting the common enjoyment to go for a jog, or walk to the store in relaxed attire, though suspicion and fear can foment an unwarranted response from law enforcement. “Fifty years wasn’t that long ago. If you roll back the clock, we have the same feeling of apprehension and fear. Thank God we can broadcast in seconds and minutes, because we know folks will discredit (claims of brutality and racism). But it’s a shame I have to figure out how I’m innocent, because I’m immediately guilty.”

Regarding the local illustration of excessive force targeting community organizer Al Flowers (on July 26), Gray pointed to the simple notion of Flowers’ long recognized presence in the community, saying, “If you see a community leader is involved, over what seemed like a fairly minor issue, you would think someone should just call and ask them to come in (to the police station). You don’t want to go by a man’s house at midnight … a man defending his children makes a lot of sense. People respond to how they’re being treated.”

The killing of Michael Brown in Ferguson, Mo., and the subsequent uproar, is captivating the world; a world that maintains long term memories of America’s history of race relations and adjoined police brutality.

“Everybody’s got their eye on it,” stated Gray. “It’s unbelievable to watch the militaristic zone. You can’t tell the difference between Iraq and Ferguson from the images we see.”

Specifically describing the impact of forensic results identifying four bullet wounds to the body as well as two to the head, Gray used the word “annihilation” to describe the approach taken to subdue an unruly young citizen.

Gray related the emotion of the event to his personal anxieties with his own parenting concerns.

“I pray every day my son will have the wisdom to see past the inequities. The storyline is the same. It only takes being pulled over … walking home from practice. The situation could be you,” said Gray. “At 12, 15, 19, 23 (years old) you don’t know if you can expect great maturity. At that age I was quick at the mouth and tongue …without a father in the house … trying to figure this thing out,” recalled Gray.

“Our young folks have to see the world. When you intimidate a child, it doesn’t work,” stated Gray.

Additionally, in regard to the Ferguson post tragedy fallout Gray pointed, “You can’t expect people to heal when you lead with riot gear.”

You have to change the culture,” said Gray. “There needs to be this new generation, where there truly is equality and justice for all. That is the goal; to get to that place.”