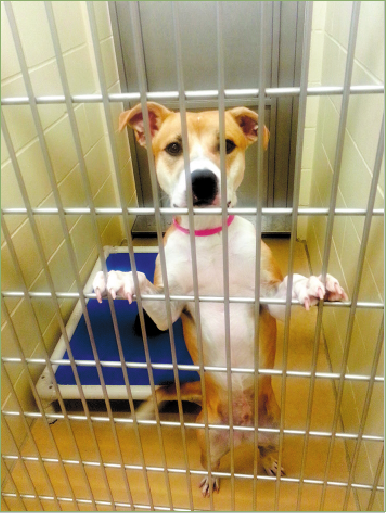 Many children look forward to the presents they’ll receive for their birthday. Ten-year-old Ainsleigh Jensen believes so much in the importance of Minneapolis Animal Care and Control (MACC) that she requested donations for the organization in place of receiving presents for herself.

Jensen and her mother have gone to MACC together to visit the animals and volunteer. MACC works with residents to create safe and healthy communities for people and animals. They hosted their “I’m in the Doghouse” event on September 27.

At the event, MACC staff and volunteers gave tours of their facility. There was also face-painting, a dog agility demonstration, a dog costume contest, food and educational booths. The main event was “kenneling” local elected officials, celebrities and average citizens. Mayor Betsy Hodges and City Council Members made special appearances in the doghouse on the warm, sunny afternoon.

City Council Member Jacob Frey (at left) cuddled with Randi, a 4-month Chihuahua-Collie mixed-breed puppy that was up for adoption. The puppy weighed only two pounds, but will grow up to be about 15 pounds. Through the event, Randi found a new home.

“MACC does an extraordinary job caring for animals. First, they rescue abandoned cats and strays and find them homes. Secondly, they care for these animals in the interim. Finally, they find them foster homes and eventually full-time families,” Frey said.

Ward 5 City Council Member Blong Yang cares about animals and said he is surprised by how much of his time is spent dealing with animal issues.

“Having MACC here is important. Forty percent of all phone calls coming from Ward 5 are for problems with dogs barking or stray animals. I never thought I’d be focusing so much on animal problems. Hearing 40 percent makes you realize it’s important,” Yang said.

The event goal was to raise the funds for a new dog run so that the volunteers have more space to walk and exercise the animals at MACC. They were able to raise over $19,000.

Jeanette Wiedemeier Bower, Program Development Coordinator at MACC, explained that they are trying to get people to understand what they’re really about. They send 1,600 animals each year out the door. If animals can’t be adopted, they go to rescue groups. In 2010, MACC worked with 16 rescue groups, and now they work with 50 partner groups.

“We wanted to decrease the euthanasia rate, one paw in front of the other,” Wiedemeier Bower said.

Domestic violence help: In many of these situations, the harmed person will not leave the situation because the predator is threatening to hurt or kill the animals. MACC will house the pets and keep them safe until the owner is stable and able to care for the pet again.

Bully breed adoption: People are also able to adopt pets from MACC. On June 5, 2014 they began adopting bully breeds to the public. Bully breeds were originally bred to protect livestock and property. They all come from Molossers, which is a breed that originated in ancient Greece. Molossers were big dogs with large bones and muscles, pendant ears and short muzzles. A few examples of bully breeds are Staffordshire bull terriers, American Staffordshire terriers, and American pit bull terriers. Although these dogs are called bully breeds, in many cases they have been found to be wonderful pets, Wiedemeier Bower said.

Anyone adopting a bully breed from MACC will receive a two-month pass for training free from the Animal Humane Society. Classes are held at five different locations — Golden Valley, Coon Rapids, Woodbury, St. Paul and Buffalo.

Anyone who adopts a pet, bully breed or not, from MACC is eligible for a free people-only class that teaches owners what supplies they will need, the things they will need to train their pet and what will make their pet happy. They’re trying to create a great environment for pet owners in general. They can also get a coupon for different training opportunities.

Adoption counselors: MACC’s trained volunteer adoption counselors work in the MACC lobby and help people to think through what kind of home they have and what kind of pet they are looking for. They try to help match people with the pet that would be best suited for their homes and lifestyles.

Why license your pet: The law requires that all cats, dogs, rabbits and ferrets over four months old be licensed or run the risk of a $100 fine. There are benefits to having a license on a pet if it gets lost. According to MACC, a pet that is licensed is three times more likely to find its way home because if the licensed pet is found in Minneapolis, it will get a ride home. If your licensed pet is found injured, it will receive medical attention.

As noted in the Northeaster Sept. 17, Minnesota Spay Neuter Assistance Program (MN SNAP) is a non-profit that gives high-quality, affordable, and accessible spay and neuter services for animals to those in need.

The organization was recently voted second for the most high-impact non-profit in Minnesota by MNSights Magazine, which is a magazine for Minnesota philanthropists. They were second out of 17 Minnesota nonprofits that were most frequently cited by experts in the Philanthropedia survey as having high impact on animal welfare.

MN SNAP has their fundraiser 5th Annual Furry Tail Ball coming up on November 15 at 5 p.m. at the Lafayette Club in Minnetonka. The black tie optional event features dinner and a live auction along with dancing after the program. For info, email FTBinfo@mnsnap.org

Read part one: Feral cats in the city: A primer (Megan Nash, Northeaster, 2014)