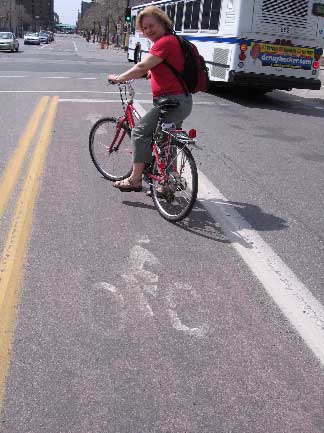 Yesterday, I reported that pavement markings for the bike lane on Hennepin Avenue were nearly invisible to motorists.

I just received this reply from Donald Phlaum, engineer and bicycle czar at City Hall about the faded markings and other hazards to bicyclists: “Re-striping of all pavement markings in Downtown Minneapolis will begin in May. Bicycle lane lines will be re-striped as part of this work.”

Asked Don Phlaum about the sorry state of city streets, particularly on the curbsides where bicyclists ride. “If you see potholes please report them by calling 311,” he said. “This is now the most efficient way to let the city know about general maintenance concerns. You will need to be more specific as to where specific potholes are located and Public Works will do its best to repair them.”

I also asked Phlaum about the construction on Phase Two of the Loring Bikeway. “The segment between Oak Grove and Groveland will be under constructionthis season as a new multi-use trail is installed in front of St. Mark’s Church,” he explained. “This will be a long-term safety improvement however, because our easement area is confined, we cannot easily accommodate bicycles and pedestrians while construction is underway. There is also a website that has been created to help provide construction updates and other information about the Loring Bikeway”.