On September 30th, the 18.4 cent per gallon federal gasoline tax is set to expire unless extended by Congress. Without the tax, the federal Highway Trust Fund would run dry, eliminating funding for mass transit and road projects. The effect on our nation’s crumbling infrastructure and struggling economy would be devastating—that’s why the tax has been routinely extended over the past century.

But having just emerged from deficit reduction negotiations that brought the nation to the brink of default, it’s clear that the game has changed. Conservatives in Congress, recognizing an opportunity to push through their austerity agenda, used the threat of imminent default as leverage. Much like default, the defunding of the Highway Trust Fund would have negative consequences for all Americans. Despite this, the same conservative lawmakers who were willing to risk economic catastrophe by refusing to raise the debt ceiling may threaten to allow the gas tax to expire if they don’t receive policy concessions from their opponents.

The potential political firestorm in September raises some important considerations. Namely, the $0.184/gallon tax is simply not enough to keep the Highway Trust Fund solvent in the long term. Congress already had to appropriate an extra $8 billion to keep it running in 2008, and the Congressional Budget Office estimated the trust fund will face a total shortfall of $80 billion in 2018. A new plan has been put forth in Congress that would make deep transportation cuts over the next six years, but even this proposal would be unlikely to meet the nation’s infrastructure needs with the current tax. 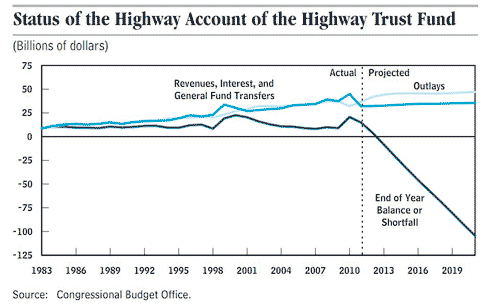 We need only to look at other developed nations to see how woefully low the gasoline tax really is. In Sweden, taxes will set you back about 6.9 kroner/liter, about $4.00/gallon. Not to be outdone, Germany and the U.K. tax their gasoline at €1.22/liter ($6.54/gallon) and £1.25/liter ($7.75/gallon), respectively. By contrast, the gasoline tax in Minnesota, federal and state combined, comes to about $0.46/gallon. Besides serving as a reminder that we should adopt the metric system, these figures prove that the U.S. can’t expect to keep up with the infrastructure development of other industrialized nations with our current gasoline tax rates.

The gas tax is also a classic example of a Pigovian tax, or a tax designed to account for negative externalities. Burning fossil fuels contributes to greenhouse gas emissions, air pollution, and road congestion—but the price you pay at the pump doesn’t reflect these negative consequences. As a result, more fossil fuels are consumed than is socially optimal. The gas tax is the most effective means of adjusting the price of gasoline to better reflect its environmental consequences; levying a tax reduces overall use and makes environmentally-friendly alternatives comparatively cheaper.

Raising the gas tax may not seem like a wise idea, since it takes money out of the pockets of American consumers. But using gas tax receipts to fund infrastructure projects puts that money right back into the economy and helps develop strong road and mass transit systems for the future. Right now, state and federal gas taxes don’t provide nearly enough revenue to fund future infrastructure development. In September, the trust fund will be lucky just to retain its current funding levels, much less receive new funding through a higher tax. Looking ahead, though, we’ll clearly need gasoline tax reform if we want to make a reasonable commitment to funding infrastructure and encourage renewable energy use.