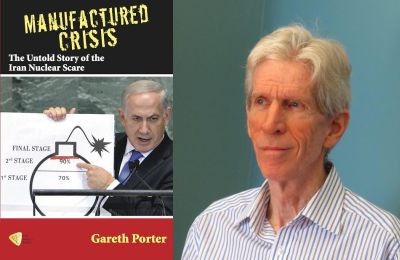 This is shortly before talks between the P5+1 (The five permanent members of the UN Security Council: U.S., China, Russia, France, Britain + Germany) and Iran resume May 13, to be concluded in June. In the Twin Cities, Porter will examine the premise they are based on. He is the author of the Manufactured Crisis: the Untold Story of the Iran Nuclear Scare, published in 2014 (Just World Books). Gareth Porter will address his findings based on an intensive dissection of allegations about Iran’s nuclear program. Porter is “the most conscientious follower of the fantasy danger of Iran’s purported ‘nuclear weapons program,’” according to Iran expert William O. Beeman, a University of Minnesota professor.

Gareth Porter, the 2012 recipient of the prestigious London-based Martha Gellhorn Prize for Journalism, an award presented to a journalist who reveals “an unpalatable truth, validated by powerful facts.” (Julian Assange received the award in 2011 for Wikileaks) will be in the Twin Cities Wednesday, May 7, and Thursday, May 8, to talk about the Iran nuclear scare.

As an historian and investigative journalist, Porter has been examining U.S. foreign policy, military and security issues regarding the Middle East and Afghanistan, as well as writing on the Philippines, Korea, Cambodia, and Viet Nam. Porter is a news analyst for Inter Press Service (IPS). His writing is published at Truthout, the Huffington Post, The Nation, Al-Jazeera English, Counterpunch, Raw Story and Salon.com, among other places.

With a PhD in South-East Asian Studies, Porter began his career as the Saigon Bureau Chief for Dispatch News Service during the Vietnam War and went on to report stories for international news media. Throughout his career, he has worked to debunk policy formation and propaganda that can lead to war. His 2005 book, Perils of Dominance: Imbalance of Power and the Road to War in Vietnam (University of California Press) was called “without a doubt, the most important contribution to the history of the U.S. national security policy to appear in the last decade” by historian Andrew Bacevich.

Today, Iranians are experiencing the detrimental effects of economic sanctions and the continual threat of future military attacks. It will be important to hear what Gareth Porter has to say about the Iran nuclear scare, which provides the premise for U.S. relations with Iran. He has also examined the reports on gassing in Syria.

He will speak at events free and open to the public Wednesday, May 7, 7:00 p.m., Macalester Plymouth United Church in the Social Hall, 1658 Lincoln Ave., St. Paul (free parking south of the church) and Thursday, May 8, 7:00 p.m., Spirit of St. Stephens, 2201 First Avenue South, Minneapolis (Entrance and free parking in lots on the First Ave. /West side, or on the street.)