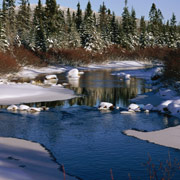 If you are looking forward to some skiing this upcoming season, chances are the snow you enjoy on the slope will not have fallen from the sky per the natural order of things.

Most snow gracing ski resort hills is artificially created from a combination of water, pressurized air, and sometimes a chemical additive that helps ice crystals form. The proliferation of man made snow might be good for resorts, allowing them to operate independent of weather’s whims, but like most human efforts to replicate nature, snow-making comes with considerable environmental costs.

One of the key environmental concerns is water use. Lutsen Ski Resort in Northern Minnesota has been getting press recently for this very issue. Lutsen has drawn water for its snow from the nearby Poplar River, a protected trout stream and incubator for other Lake Superior fish.

In the 1960’s, the Department of Natural Resources issued a permit allowing Lutsen to use up to 13 million gallons of river water each season as long as the stream flow speed could still support fish. Since 2001, Lutsen has been violating that permit by withdrawing 60-100 million gallons of water a season.

Last spring, the DNR finally tried to take action by requiring Lutsen to take its water from Lake Superior. Lutsen appealed to the legislature and won an exemption to take up to 150 million gallons a season from the Poplar River until 2016, on the condition that stream flow does not fall below 15 cubic feet per second for more than five consecutive days.

Several weeks ago, the river’s flow hit 15 cfs and has been hovering near there ever since. In response to this conundrum, the DNR issued a second special exemption allowing Lutsen to continue pumping the Poplar down to 5 cfs.

This kind of (literal) drain on the river has appreciable effects. Not only are we losing a natural water source in an already water-starved world, but low stream flow severely threatens the river’s aquatic life. Flowing water is necessary to incubate trout eggs, enable young trout to survive, and maintain the insect population that feeds the fish.

As usual, economic considerations won the day: to change water sources immediately could have forced Lutsen to close. If the resort closes, people lose jobs and the local economy suffers.

What bothers me is that nobody seems to be talking about the larger problem here: the unsustainable use of water for snow. Plenty of people are upset about the depletion of the Poplar River, but the 2016 alternative is the depletion of Lake Superior.

In some states, environmental agencies have required ski resorts to build large holding ponds from which to draw water when natural water levels are low. The DNR could and should be thinking along those lines, devising creative ways to source water, rather than simply gifting public environmental treasures like Lake Superior to private corporate interests.