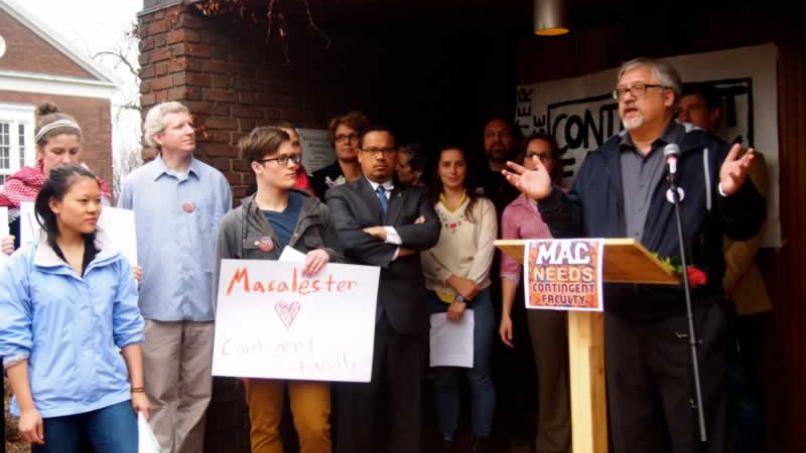 Adjunct professors at the University of St. Thomas, the third group of St. Paul college educators to file a petition to unionize with the Service Employees International Union (SEIU), are scheduled to have their ballots sent out on July 3, according to Kelly Donahue, a St. Thomas adjunct organizer.

Donahue received her Ph.D. from the University of Minnesota and has been teaching in the history department at St. Thomas for three years. She said she will make about $4,500 per class in the upcoming fall semester. It will be a slight raise from previous semesters, she added.

Donahue began working as an adjunct professor at St. Thomas thinking it would be temporary and, when she received her Ph.D., she would move forward with a tenure-track position.

“The more I talk to other adjuncts, now I realize – there are people who are here at UST adjuncting for 27 years,” she said. “If adjuncting is going to become this permanent feature of the academic world, then we have to be treated better.”

Aside from aiming for benefits focused on the adjunct well-being, Donahue noted a few ways students could benefit from the unionization of St. Thomas adjuncts. For instance, orientation training and faculty development is not always provided for adjunct professors, she said. She believes these types of resources that are available for tenured professors can greatly affect students’ classroom experiences.

Another organizer, Lucy Saliger is a first-year professor at the University of St. Thomas and was one of the first St. Thomas adjuncts to work with the campaign to unionize.

For her, it has been a long journey to get her Master’s degree in English and teach at a university. Saliger said she spent many years as a “working-class” person while raising five children.

Saliger stated that a few motivations for her involvement include a general belief in the power of organizing, as well as her positive experiences with adjunct professors while she earned her degree. “When I was at the [University of Minnesota]…the people who helped me the most were contingent faculty.”

Both Donahue and Saliger mentioned the high number of women as adjunct professors and the constraints the low pay puts on many of them.

Speaking about going back going back to school to pursue her degree and ultimate goal of becoming a college English professor Saliger said, “It shouldn’t just be a situation where people are independently wealthy or supported by their partners, which is so problematic for so many feminist reasons.”

“There is almost the assumption that the income is what it is because you are relying on a partner,” said Donahue. Donahue said she does not have anyone to rely on for extra income and the only way she can afford to live in a decent apartment is by sharing it with a childhood friend.

Comparison to other campaigns

First to vote would have been Macalester College, located less than two miles from both Hamline and St. Thomas. However, Macalester organizers called off the vote on June 2, the day before ballots were to be sent to adjunct professors.

SooJin Pate, one of the Macalester organizers, told the Star Tribune, “It puts the election on pause. […] As we were speaking to people, it became very clear that people wanted more time to talk.”

As Hamline adjuncts are wrapping up their voting process with the National Labor Relations Board to count votes on Friday, the question remains: Are St. Thomas organizers likely to follow Hamline’s lead in moving forward with a vote?

Donahue believes St. Thomas organizers are in a different position with their administration when compared to Macalester. “The St. Thomas administration, though they may have similar concerns and express them in similar ways, I think they are not responding quite as harshly [as the Macalester administration],” she said.

In addition, Donahue and Saliger believed that at Macalester, most or all of the organizing adjuncts would not be returning to the school in the fall. This is quite the opposite of the situation at St. Thomas.

“We have a big organizing committee and all of us are coming back in the fall,” said Saliger.