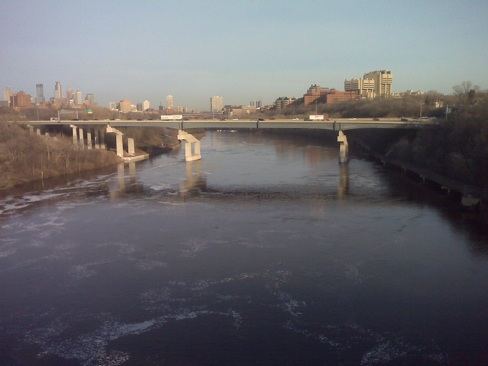 UPDATED 9/28/2010 6 p.m.: Yes – academic freedom is at stake in the attempt to stop the premiere of Troubled Waters documentary, said President Robert Bruininks in a statement issued late today. Faculty had already called for a full-scale investigation of why the premiere was canceled by U of M University Relations vice president Karen Himle. On blogs and in classrooms, U of M faculty, students and staff called the move censorship by the university.

After more than a week of bad press and internal and external pressure, the University of Minnesota announced last week it would be premiering the film Troubled Waters as originally planned. The film explores, among other things, how nitrate fertilizer runoff from farming contributes to the Dead Zone in the Gulf of Mexico. Originally scheduled to air on TPT on October 5, the documentary was yanked by University Vice President Karen Himle on September 7 for “scientific review.”

Faculty and staff have called for a full-scale investigation into just how the University public relations department came to make academic decisions about a research-based film.

“This should’ve never happened in the first place,” said Christine Marran, associate professor of Asian Languages and Literatures, who teaches environmental issues related to Japan. Marran also serves on the Academic Freedom and Tenure Committee, which plans to explore the case. “The main point for me and all faculty is that this kind of thing undermines faith in the process of academic freedom,” said Marran.

Last week, under increasing pressure from a vexed U of M academic community, Provost Tom Sullivan addressed a meeting of the Faculty Consultative Committee (the minutes of which were obtained by Twin Cities Daily Planet). Sullivan announced that he, Bruininks and the Office of the General Counsel will review roles, responsibilities, and processes with respect to the Troubled Waters case. “We need to be vigilant in supporting and encouraging, through all of our processes, decisions, and actions, the important values of academic freedom,” he told the committee.

Jon Foley, the director of the U’s Institute on the Environment and a professor in the Department of Ecology, Evolution, and Human Behavior, commended the provost’s swift response.

“This cannot go without scrutiny,” he said. “We must clarify roles and responsibilities. And we also need to know just what happened here in order for academic freedom to be absolute and never again compromised like this.”

When it was announced last week that the film had been pulled for “scientific review” by Vice President Karen Himle, the public outcry was that this was censorship.  Himle has close ties to big agribusiness via her husband, whose firm represents the Minnesota Agri-Growth Council. Critics said the university’s first mission seemed to be more about maintaining relationships with major agribusiness than maintaining academic freedom.

Cary Nelson, president of the American Association of University Professors, a national organization dedicated to advancing academic freedom, said the fact that a PR office was involved at all poses a serious threat to scientific truth and academic freedom.

Himle’s role has been called into question by numerous news outlets raising questions of conflict of interest. Some blogs following the issue also note that this tie to big agribusiness actually makes Himle the ideal candidate to manage those big agribusiness relationships that the university so closely relies on for funding.

Nelson notes that when a PR office is involved in any academic issues, it automatically raises censorship issues.

“In some ways, it’s the worst office to do this,” said Nelson. “It’s not an academic office. And it’s an explicit acknowledgement that censorship occurred for PR reasons.”

What’s more, Nelson said, the university’s later assertion that the film was pulled because it “wasn’t balanced,” is a further threat to its mission to uphold creative expression.

“The AAUP’s rejection of the notion of ‘balance’ applies to this particular case,” he said. “‘Balance’ is repression of speech. Faculty and students have a right to advocate for what they believe in. Whatever the need for balance is often satisfied by a diverse range of forces, which in this case is Big Ag, who will have their say as well.”

Foely says that, although balance is a complex issue in science, in this case it seems the university was making a snap decision about the film’s tone. “Is it more of an aesthetic statement in how the science was portrayed?” he says. “When I heard the concerns were more about tone and not scientific, I began to get worried. Are we shooting the messenger?”

While this might be the first time a PR department has had such serious involvement in an academic issue at a U.S. university, this isn’t the first time a university has been seen as putting the desires of big agribusiness over the mission of academic freedom.

According to Gary Rhoades, the AAUP general secretary and co-author of Academic Freedom and the New Economy, this is a long-standing issue, and one that will continue to grow as state funds are cut and universities become more dependent on private monies.

“This is about a public image concern about offending a particular group, in this case large agriculture,” Rhoades says. “As universities become more like big businesses, the roles of donors becomes increasingly important.”

As researchers explore policies that call for higher yields at the expense of health and the environment, university concerns about offending their big donors grow.

Last year, author Michael Pollan, who has been critical of big agribusiness practices, was scheduled to speak at California Polytechnic State University in San Luis Obispo. The talk was canceled after pressure from a donor who chairs the Harris Ranch Beef Co.

In a case eerily similar to the Troubled Waters brouhaha, in 2002 a University of Manitoba film, Seeds of Change, was held from public viewing by the university’s administration for more than three years. Seeds of Change explores the controversy of GMO crops and biotechnology in Canada. The university was never forthright about specific reasons for quashing it. Critics cited the University of Manitoba’s long-standing relationship with Monsanto, a company responsible for patenting GMO seeds, as the primary reason for withholding it from public view.

The University of Minnesota isn’t free of threats from big agribusiness donors. In 2008, the Minnesota Soybean Growers Association and the Minnesota Soybean Research and Promotion Council temporarily yanked $1.5 million in grant funding after a study said that dedicating huge amounts of land to food crops for fuel such as ethanol could drastically change the landscape and worsen global warming. That study included U of M ecologist David Tilman, who also appears in Troubled Waters.

University officials, including Allen Levine, dean of the College of Food, Agricultural and Natural Resource Sciences, met with the agribusiness groups to mend the relationships and ensure the grants were reinstated.

Rhoades said that while the U’s reputation might be sullied by its exposed allegiances to big agribusiness, the issue also presents a learning experience for academia and the community.

“What it reveals,” Rhoades said, “is that the community can have an impact on the university in fulfilling its public good responsibilities. And internally, research and monies should focus on the core aspects of the institution.” In other words, Rhoades said, a land-grant institute shouldn’t just serve the highest bidders.

Foley agreed this is a teaching moment for the university, and expressed hope that an immediate investigation will reveal how the PR department’s role swelled and ensure that steps are taken to keep it from happening again.

While he believes the incident was unique, he said complete transparency in this case is necessary for the university to uphold its mission to academic freedom.

“Only by doing things out in the light of day can we assure everyone, including ourselves, that research and scholarship continue without interference by any outside group, including funders,” Foley said.

“My colleagues at the U all strongly believe that funders — whether public, foundation or private — should not, in any way, be able to ‘muzzle’ research or speech that they don’t like. That’s not in the public interest, and that is not compatible with our mission as a public university.”