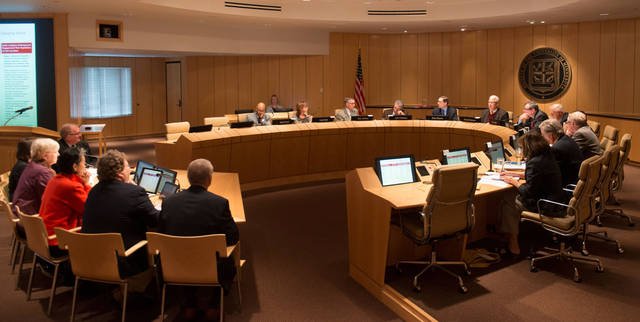 Come next year, the University of Minnesota’s tuition freeze could cover more students.

While some University and state leaders say the proposal is a step in the right direction in alleviating student debt, others are voicing concern about the freeze’s broader effects and Kaler’s new plan for getting more state funding.

Kaler presented the budget request to the Board of Regents at its monthly meeting on Friday. Regents will vote to approve the proposal next month.

According to his proposal, graduate and professional students would pay the same amount in tuition each of the next two academic years.

“We think that’s an extraordinarily important step to take, and we’re requesting the Legislature fund us appropriately so that we’re able to do that for Minnesota students and their families,” Kaler said at a Wednesday news conference.

School of Public Health Dean John Finnegan said he doesn’t think a tuition freeze for graduate and professional schools is necessary because institutions nationwide make their rates based on the changing market.

And because of the many factors involved in setting prices, an across-the-board tuition freeze isn’t the best option, he said.

“It puts [the School of Public Health] in a very difficult situation,” Finnegan said, adding that tuition rates for his school aren’t overly burdensome on students compared to other institutions.

Lowering tuition rates for graduate and professional students was a goal the Graduate and Professional Student Assembly set for this year, GAPSA President Alfonso Sintjago said.

“When you’re starting out this path for medical school, it’s a big burden to take out all these loans,” said Ann Bergstrand, a third-year medical student and member of the graduate and professional student government.

Bergstrand said she has accumulated nearly $100,000 in student debt, adding that the proposed tuition freeze is a success for graduate and professional students.

Council of Graduate Students President Andrew McNally said the proposed freeze was a good first step, but he said he’s concerned that it doesn’t include students paying out-of-state tuition.

Sintjago said GAPSA representatives plan to boost graduate and professional student attendance at this year’s “Support the U Day” — an annual event where students flock to the State Capitol in support of the University’s legislative goals — so they can share their enthusiasm for the tuition freeze with legislators.

Some University administrators said if the proposed tuition freeze passes, the budget plan would attract more students to their colleges.

“If you’re a student [who] comes from a low-income family, these [tuition rates] can seem so daunting,” he said.

This year, in-state tuition for first-year medical students is $25,248.

“I worry that really good students won’t even apply, because it’s just way too expensive and we have very few scholarships,” Jackson said.

In total, Kaler’s budget proposal asks the Legislature for more than $1.3 billion over the next two academic years. This request would put the University’s funding levels on par with those it received before the recession in 2008.

In the proposal, Kaler also asks the state to invest an additional $5 million for each year of the request. In exchange, the University intends to reduce its request from the Higher Education Asset Preservation and Renovation fund — which provides state money for facility maintenance and upkeep — by a matching $5 million each year.

“For whatever reason, we haven’t been able to be successful in bringing the HEAPR funds that the campus needs,” Kaler said at the news conference. “The definition of insanity is you keep trying to do the same thing and it fails.”

Rep. Gene Pelowski, DFL-Winona, said he supports the tuition freeze for the University, but he doesn’t approve of the new approach to request HEAPR funding, based on the school’s sometimes inappropriate requests in the past.

“There have been questions raised about how the University has prioritized HEAPR,” he said.