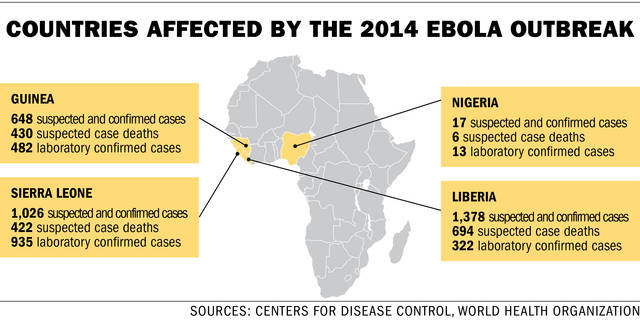 As the largest Ebola outbreak in history continues to plague parts of West Africa, the University of Minnesota and other colleges nationwide are adjusting their travel policies to comply with new recommendations from the federal government.

The advisements, which the Centers for Disease Control released late last month, suggest that schools place stronger restrictions on faculty and students traveling to and from the affected regions. The University is largely complying with the guidelines, and it has been continuously
assessing the situation to ensure students’ safety at home and abroad.

The CDC posted a Level 3 travel warning that recommends people avoid nonessential trips to Guinea, Liberia and Sierra Leone, and it is advising schools to postpone any education-related travel to the countries. The center also posted Level 2 travel alerts for Nigeria and the Democratic Republic of the Congo, which advise increased precautions while traveling in those areas.

So far, she said, the committee has not received any such requests.

When the CDC first posted the travel warnings, Tsantir said, the University reached out to the two students who were in study abroad programs in West Africa.

One student had already decided to come home early from Liberia and the other had already left Sierra Leone, Tsantir said.

The University’s GPS Alliance has also made plans for students who are traveling in other parts of Africa this fall and has advised them to take precautions as the school continues to monitor the outbreak.

According to University’s Safe U website, travel restrictions will change as the CDC’s recommendations change.

Additionally, the GPS Alliance reached out to international students from West Africa and offered them information on the Ebola outbreak, the email statement said, but it hasn’t heard any concerns from those students so far.

Jill DeBoer, director of the Academic Health Center’s Office of Emergency Response, said various University departments have been in communication with one another as the outbreak has progressed.

She said her office’s main priorities are ensuring students have access to accurate information about the disease and that University units are prepared in case the status of the outbreak changes.

“It’s not a health emergency here, but we’re just trying to be prepared for various scenarios,” DeBoer said.

Boynton Health Service is also educating its staff on the symptoms of Ebola and the appropriate infection control precautions.

Like the University, the state Department of Health’s travel recommendations are similar to the CDC’s, said Kris Ehresmann, the infectious disease director for Minnesota’s health department.

Ehresmann said the department has been in touch with health care providers across the state to ensure they are aware of the signs and symptoms of the disease, especially when working with patients who have traveled to affected areas in West Africa.

While the average Minnesotan is at low risk for contracting Ebola, she said, the global impact of the outbreak is evident.

“From the international health standpoint, it’s a significant event,” she said.