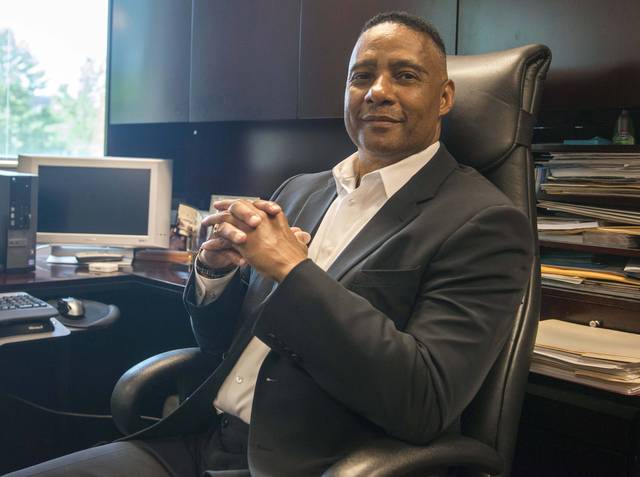 Craig Taylor, director of the University of Minnesota Office for Business and Community Economic Development and Business Technology Center, poses for a portrait at his office in the University Office Plaza on July 11, 2014. Taylor was nominated by Mayor Betsy Hodges to be the next director of the city’s Community Planning & Economic Development Department. (Photo by Chelsea Gortmaker)

A University of Minnesota leader could soon be moving his 15 years of community development expertise from campus to Minneapolis City Hall, a shift that he said will foster a stronger bond between the two institutions.

If the City Council approves his nomination in an Aug. 1 vote, Taylor would likely begin his new post at the end of summer, overseeing things like long-range city planning, residential and real estate development, business licensing, and city zoning and coding.

“The qualifications Craig brings will advance our work not only on growing the city, but on growing the city inclusively and advancing equity,” Hodges said in a press release, adding that his 25 years of management experience qualify him to head the city’s economic development efforts.

Taylor said his background fostering relationships between the University and the Minneapolis community likely played a role in his consideration for the job.

“We can see the potential there,” Taylor said. “We see the type of synergy and alignment that can be created if these two powerful institutions were to work together.”

The leadership change comes at a time when the University’s Board of Regents is pushing for school officials to have a louder voice in area development. At its July meeting, the board presented a plan to increase engagement between the two.

Taylor said he also plans to strengthen those ties.

“I see the University as an important partner, a critical partner,” he said, “so I’m looking forward to reaching back and certainly connecting the University to the city’s work, and vice versa.”

Since coming to the University, Taylor has helped establish urban programs like an outreach center in North Minneapolis and pushed to support minority- and women-owned small businesses, among other initiatives.

“I think that’s probably one of the most important assets that I will bring with me — all of the broad and diverse relationships within my network that I’ve developed over the years I’ve been here at the University,” Taylor said.

Taylor said he wasn’t originally considering the CPED post but changed his mind after numerous talks with city officials. One of those was with a very interested Hodges, who had pegged Taylor early on for the position, said Kate Brickman, communications director for the mayor.

“It is a key position in the city that provides leadership, vision and strategic direction,” Brickman said. “[Hodges] thought he was the clear best person for the job.”

Taylor said his political support for the mayor and the city’s long-term, 2025 plan — as well as the opportunity to expand his work at the University to a larger scope — helped solidify his decision to make the switch.

“Scale what we’re doing [at the University] by four or five,” Taylor said. “The opportunity … was kind of hard to say no to.”

Chuck Lutz, interim CPED director, said the details of Taylor’s transition to the helm of the department are still in process.

“We have not had the opportunity yet to sit down with Craig,” Lutz said.

Taylor said he’s not looking to commandeer the department, but instead build off “robust conversations and dialogue” about its recent and current initiatives.

“I want to shake everybody’s hand, find out what everybody does,” Taylor said. “I’m going to respect the fact that there’s a history that is there — there is great work that is already being done.”