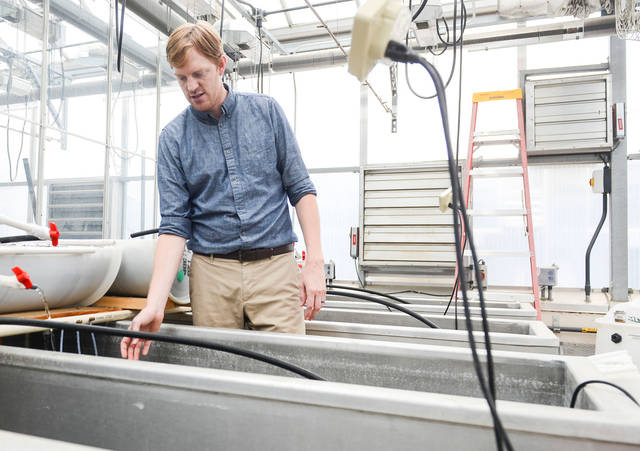 (Photo by Holly Peterson) College of Veterinary Medicine assistant professor Nicholas Phelps explains aquaponic farming in a greenhouse in St. Paul on July 25, 2014. Phelps’ project is one of 17 receiving funding from MnDRIVE.

With government dollars and partnerships with industry in tow, the University of Minnesota’s research powerhouse is turning its gaze to addressing global food security, safety and sustainability.

In a state home to many food companies and more than 26 million acres of farmland, the Legislature allocated $3 million in Minnesota’s Discovery, Research and InnoVation Economy, or MnDRIVE, funding to 17 University projects earlier this month, as part of the school’s global food ventures initiative.

“Being able to produce enough food to feed the growing world population is a challenge,” said Linda Valeri, administrator of the global food ventures initiative.

In 2013, the Minnesota Legislature awarded MnDRIVE almost $18 million in annual funding for the following two years to supplement collaborative projects that focus on global food, robotics, environment, brain conditions and interdisciplinary efforts between those topics.

The global food projects range from enhancing the flavor and appeal of whole grain to improving the gut health of commercial turkeys. Others focus on researching new agricultural methods, like how to better manage salmonella outbreaks or grow certain fresh produce year-round in Minnesota.

“Anything we can do to harness the power of research and competitive thinking to improve our economy is something we can support,” said Sen. Terri Bonoff, DFL-Minnetonka, chair of the Higher Education and Workforce Development Committee.

“With Cargill and General Mills being based here, we contribute to feeding the planet in a very significant way,” she said.

Nicholas Phelps, assistant professor in the College of Veterinary Medicine, said MnDRIVE has provided much of the funding for his research project on self-sustaining indoor farms.

“If it wasn’t for MnDRIVE, I don’t think we would have got this project off the ground and been able to focus it on Minnesota,” Phelps said. “That’s the best part — it goes right back into industry.”

To decide whether the state will continue to fund the MnDRIVE’s program, legislators will, beginning in 2015, weigh biannual reports on the projects’ progress from the University’s Board of Regents, said Sen. Greg Clausen, DFL-Apple Valley, who is the vice chair of the Higher Education and Workforce Development Committee.

“We’ll be reviewing whether the investment has been a good investment, what types of initiatives have been born through this project,” Clausen said. “We’ll have to take it from there.”

Valeri said that while the MnDRIVE funding has kick-started the Global Food Ventures initiative, she hopes to eventually secure funding from other sources in order to supplement it.

“We are working hard to demonstrate the return on that investment.” Valeri said.

Here is a roundup of a few of those Global Food Venture projects:

Almost one-third of the available commercial food supply was not eaten in 2010 — a $27 billion loss for the dairy industry alone, according to a U.S. Department of Agriculture study released earlier this year.

One MnDRIVE project aims to eliminate unnecessary waste and reduce the risk of disease from rotten food with bioresponsive stickers that change from blue to red when milk is spoiled. The stickers were created by bioproducts and biosystems engineering assistant professor Abdennour Abbas.

The bioresponsive packaging would allow consumers and food producers to easily detect whether milk has spoiled before it changes in taste, smell or appearance by looking at a color-shifting polymer that responds to pathogens and differences in temperature.

Abbas said he thinks indicators on food will soon be required by regulations as a way to continuously keep track of food quality.

“The world population is growing,” said Marin Bozic, an applied economics assistant professor who is working on the project. “We need to get more efficient with food resources.”

Bozic said he thinks consumers will be excited about the technology, whose economic feasibility he is assessing.

“We want to take [packaging] to the next level,” he said. “We want to make packaging dynamic and informative to the life of the product.”

In a greenhouse on the St. Paul campus, University researchers have built small farms where fish and edible plants coexist.

The research focuses on Minnesota’s aquaponics industry, which has grown from a handful of owners of the miniature farms to more than 30 licenses statewide — some of them large commercial producers, said Nicholas Phelps, assistant professor in the College of Veterinary Medicine.

The only input in an aquaponic system — besides the fish and plants — is fish food, Phelps said. Nutrient-rich water from fish waste fertilizes the plant crop, which filters the water so that it’s clean when it circulates back to the fish.

The researchers, partnered with two Twin Cities farms, will investigate and attempt to mitigate the risk of bacterial contamination in commercial aquaponic systems, since raw waste is the basis of nourishment for the crops.

Fish and vegetables produced in aquaponic systems — including tilapia, yellow perch, leafy greens and herbs — are sold to grocery stores and restaurants, he said.

Aquaponic farms, which can be stacked vertically in warehouses, need less space and water than farming on a field, Phelps said.

“It’s constant water flow through the system, so you don’t use as much water,” he said. “It will not only advance the business but provide safe food for all the consumers who are eating it.”

Some milk, soy and peanut products could stop being a source of fear for the millions of Americans with food allergies if research led by food science and nutrition associate professor Baraem Ismail is successful.

Ismail and two collaborators are working to modify the proteins in milk, soy and peanuts — three of the eight main foods behind 90 percent of serious allergic reactions nationwide.

If food companies adopt the technology in their manufacturing process, Ismail said, the project could be a major benefit — not only for those whose immune systems overreact to particular proteins, but for the industry as a whole.

“If they’re allergenic, then many companies shy away from using these ingredients,” she said. “It’s costing the industry lots of money.”

The project’s collaboration with the Mayo Clinic allows researchers access to blood samples of humans with allergies, some of whom are as young as 2 or 3.

“Parents consent for hope that their kid can eat more products,” Ismail said. “They have a hard time finding nutritious and high-protein foods for these kids.”