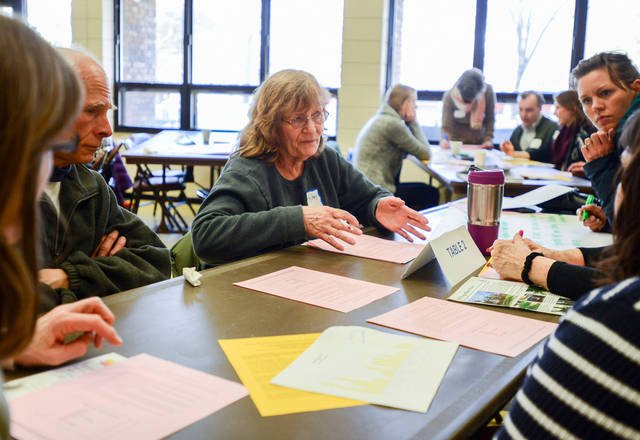 Como resident and property owner Mary Kay Dooley expresses concerns and ideas for the neighborhood at a forum at Van Cleve Community Center on Thursday. (Photo by Holly Peterson)

City officials were on hand as community members discussed ways to make the University of Minnesota area more livable Thursday.

At a forum hosted by the University District Alliance and Minneapolis Regulatory Services, residents and one student hashed out longtime issues, like absentee landlords and upkeep, and new ones, like preserving the area’s reputation after last week’s riot in Dinkytown.

Regulatory Services director Nuria Rivera-Vandermyde said she hoped the event would be the first of many conversations about improving University-area neighborhoods. Regulatory Services handles housing and fire inspections, traffic control and problem properties for the city.

Community members discussed their most pressing concerns in small groups and then shared them with the larger group so Regulatory Services representatives could respond with ideas for how to fix them. Issues that the attendees brought up included poor caretaking of rental properties, absentee landlord problems and the tenuous relationship between students and the surrounding neighborhoods.

Katie Fournier, primary UDA representative from the Southeast Como Improvement Association, said her most pressing concern is the decline in owner-occupied homes. Nearly half of all properties are rentals in the Southeast Como neighborhood, according to UDA data.

Others echoed this sentiment, including the sole University student in attendance, who said she was most concerned about the lack of connection between students and the community.

Fournier said she’s seen long-term residents move out of the neighborhoods and few move in to replace them because of concerns about living near notoriously rowdy students. While the number of noisy assemblies receiving tickets has decreased by more than half in University-area neighborhoods since 2009, residents said they were concerned about recent events like last week’s riotous gatherings in Dinkytown.

He helped form the Student Board of Community Engagement, which connects students with volunteer opportunities in the surrounding areas, in order to help foster a positive relationship between students and the neighborhoods.

“Most people tend to think of students as riotous and drunk and more of a burden than anything,” he said. “But there are a lot of smart, talented people that go to college, too, and they’re looking for stuff to do.”

At the forum, Rivera-Vandermyde shared what Regulatory Services is doing to try to address problems.

She talked about the “All Together Now!” initiative, which brings together community associations and Minneapolis businesses to encourage home improvement.

Regulatory Services is also working to give the community “open data” on the number of rental properties, housing violations, housing flags and notable housing issue properties, she said.

The evolution of the UDA

The UDA formed in 2007 in response to a report that the Minnesota Legislature commissioned to assess the impact of the University on the surrounding community.

The report found a major concern was the long-term effect of the University on the neighborhoods, including a decrease in owner-occupied homes and an increase in deteriorating student housing.

The Legislature then funded the creation of the UDA, a group of stakeholders from the University, Augsburg College, the Dinkytown Business Association and neighborhoods including Southeast Como, Prospect Park and Marcy-Holmes.

Greenisen said the UDA is like a roundtable, where leaders from areas around the University can come together and have conversations about improvement.

“The Alliance was founded to create a forum to have better conversations about how the community can be a more cohesive environment — serving both the students who come and leave, as well as the people who are there to stay and work and live,” he said.

The goal of Thursday’s forum, Rivera-Vandermyde said, was to highlight the partnership between the UDA and Regulatory Services and to ensure that community members are aware of what her department can do for the area.

Rivera-Vandermyde said she was excited about the progress made at the forum and reinforced the idea that the forum was just the beginning of a relationship that would continue.

Greenisen said he hopes to see more students learning about the UDA and getting engaged in the community.

“The Alliance is here to serve the University district, so it starts with students realizing that they’re a part of that,” he said. “They’re just as much a part of this area and the environment.”