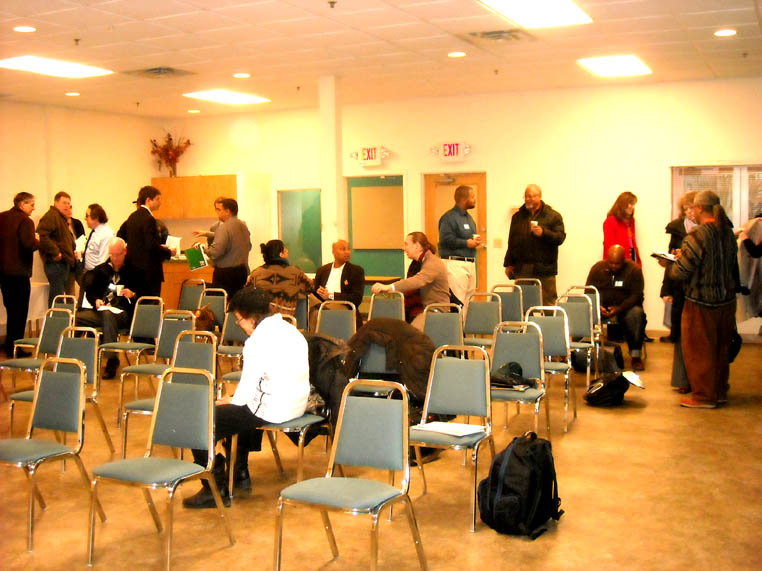 Phase two of Central Corridor construction begins this March between Hamline Ave. and Rice St. In an attempt to prevent the failures seen last year, the City of St. Paul, along with Met Council, ASANDC and several business survivors of last year’s construction began a two-part forum on how to best prepare for what’s to come.

The forums, which began on February 13 at the Brownstone Building on University Ave., are meant to bring together the business owners all along University, so that they may share with one another their concerns, their strategies, and in the case of those who survived 2011 construction, their survival tips.

“People have been getting advice from officials, the idea [at these forums] is to get businesses talking to businesses,” explained St. Paul Councilmember Russ Stark, who is helping to lead the forums.

A major asset to the forum on Monday was its panel members, each a survivor from last year. From Subway to Ax-Man Surplus to the Spruce Tree Center, each had slightly different, but also some very common advice, mainly to have a game plan, and not take the construction lightly. Be aware of the construction schedule — intersection closures, water shutdown, telephone and/or power loss, parking restrictions, and most of all, what can’t be predicted.

This was the case with a gas leak that forced Mike Koch, the manager of the Spruce Tree Center on Snelling Avenue, to evacuate the entire building, something for which he wished he had been more prepared.

Also, no matter what, expect loss in sales. Steve Bernick, who runs Milbern Clothing off of Aldine and University, experienced a ten percent loss in sales during construction, a much smaller number compared to many other businesses, and something he attributes to his communication and promotion tactics.

“Communication is key,” said Bernick, who hung more than $350 worth of signs when construction hit his business.

Bernick also ran monthly promotions, which really seemed to help, he said. For instance, for one month he’d run a buy-one-get-one ad, and the next month, he’d run a $50 off coupon with purchase ad. Be proactive about your sales is his advice, and give customers a reason to come back.

Furthermore, advised panel members, don’t be afraid to report any problems or serious restrictions to your business during construction and guard the limited parking you have. In fact, make sure you use the Construction Hotline. This makes sure that problems between the businesses and the contractors are publicly documented — advice all members of the panel endorsed.

The next forum runs Wednesday, February 15, between 6 and 7:30 p.m., again at the Brownstone Building, located at 849 University Ave. W. The first forum had a decent turn out, with roughly 40 to 50 people, and Stark worries not enough businesses will get involved.

“No matter how many times you try and communicate, people don’t show up until the cones are out,” said Stark.

The tragedy of that is, by that time, it may already be too late.