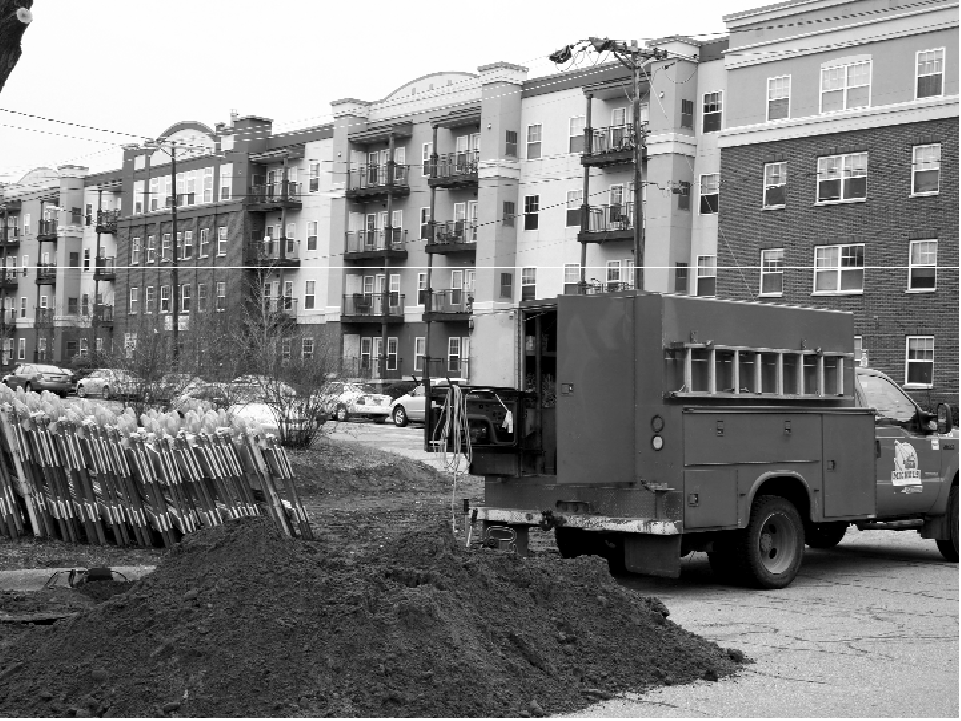 Though inclement weather has hindered progress, Michels Pipeline workers were out Saturday, May 4 installing new gas lines for CenterPoint Energy. Xcel energy has also been working along University Avenue on service upgrades, to avoid tearing up the street again after the upcoming road resurfacing. (Photo by Margo Ashmore)

Say goodbye to bumpy rides on University Avenue; it will be resurfaced between Central Avenue and 27th Avenue sometime this summer. Meanwhile, utilities have been working to do anything they need to do below the surface.

Bids for the road mill-and-overlay will be let May 17, according to the Minnesota Department of Transportation (MnDOT) website.

“There will be lane closures and a few weekend full closures during construction. More details will be available closer to the start of construction.

“As well as providing a smoother ride for motorists and restoring pavement structure, drainage and area infrastructure will also be upgraded, and pedestrian sidewalk ramps at intersections will be improved for better pedestrian accessibility.” Overall cost: $2.5 million.

Preparing for this road improvement, many utilities have been taking the opportunity to look at and upgrade their lines, some since early this year. As Becca Virden of CenterPoint Energy put it, often utilities are deliberately all laid in the same trenches, and “if anyone is going in, we all go in, to minimize the disruption” to the motorist. The City of Minneapolis reports they don’t have any sewer or sidewalk work planned.

An April 19 update on the website www.centerpointenergy.com/construction states that “Michels Pipeline Construction, a CenterPoint Energy authorized contractor, will be installing a new gas main under the sidewalk on University Ave NE from 20th Avenue NE to Lowry Avenue NE.

Virden said CenterPoint recently doubled its investment in infrastructure, with now $140 million creating a large number of projects in the metro area. The website was created to answer consumers’ questions, “and we’re working on an app.” Informed consumers are safe consumers, the utility hopes to cut down on rubbernecking.

The CenterPoint project map shows that the overall area affected includes Fourth Street NE from 17th Avenue to Lowry Avenue, and University Avenue from Broadway Street NE all the way to Lowry with the exception of 16th Avenue to 18th Avenue.

Xcel Energy started in early February modernizing their electrical distribution system, according to Tom Hoen of Xcel’s media relations team. “We’ve been changing transformers and have had to replace a couple of poles. The work will be done, weather permitting, by end of next week [May 10]. Weather has been the real battle.”

Hoen said there have been limited electrical outages during their work, and Xcel has been working with residents and businesses to determine when it would be best to have the necessary interruptions in power. “We had an apartment building out, for only 42 minutes yesterday,” he told the Northeaster on May 1. “We’ve had a good relationship with the customers and appreciate their working with us.”

One evening this reporter saw various trucks parked but running, as if ready to roll from a staging area at the Police and Firefighters Union Building parking lot at 1811 University Ave. NE. “I’ve been out that way and have seen CenterPoint there, I’ve seen Comcast out there and other phone companies,” Hoen said. “A lot of activity.”

Once MnDOT gets going on the road project, construction updates for University Avenue (Highway 47) will be found at www.511MN.org.