It is a known issue that most drivers don’t respect most traffic laws. Recently a reader wrote to us desperately trying to figure out what can be done to make drivers follow the law, specifically stopping for pedestrians at crosswalks along the newly reconstructed Central Corridor.

This article is reposted from TCDP media partner Streets.MN.

Nobody talks about this major problem, yet we have people jumping up and down to chastise bicyclists for selectively following the one law drivers seem to like (red lights). First, let’s get the excuses out of the way. You know, the “I didn’t see you patiently (or angrily) waiting to cross the street” – in other words, “I am either lying or not paying attention.”

There are two ways to solve the problem: one involves a combination of frequent enforcement and expensive tickets. The other is street design: we need to plan and engineer transportation facilities that are safe and comfortable for people to use.

The reconstruction of University Ave is a major missed opportunity and a case study in why we need pedestrian planners. Somehow we designed a major transit corridor to be dangerous for transit users and anyone else not in a motor vehicle. Every bus trip requires you to cross the street at least once — in this case twice because of the insane width of the stroad — so transit can’t be useful if you have to risk your life to access it. The corridor is full of unsignalized crosswalks that are ignored by drivers and signalized crosswalks that make it impractical to cross safely and legally. 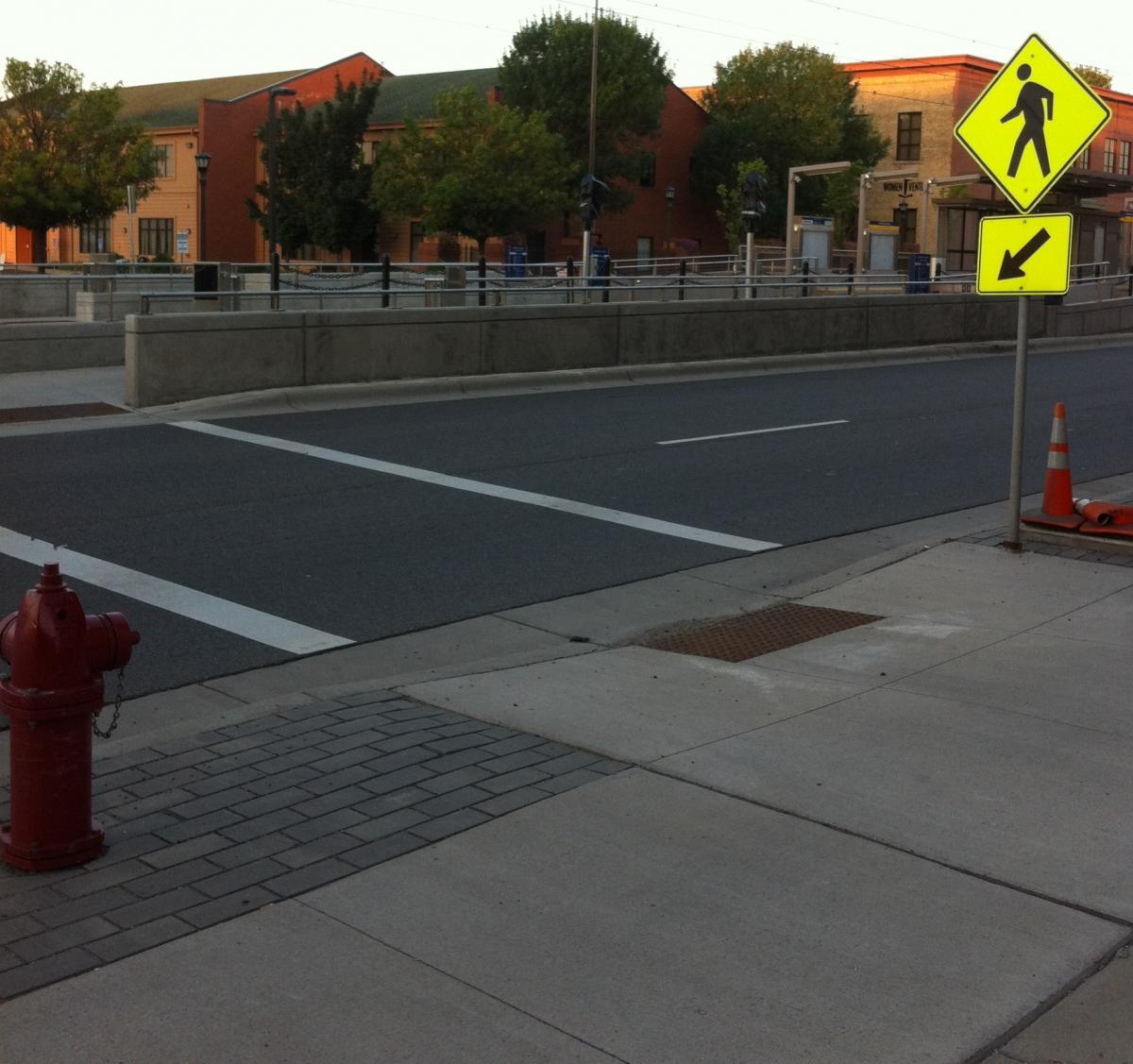 A typical useless crosswalk on the new University Ave. (Photo by Laura Eash)

If drivers won’t stop for pedestrians at officially recognized locations (marked crosswalks) then people will attempt to cross at unmarked crosswalks, which is even more dangerous because the design has incorporated fences, curbs and other barriers to prevent jaywalking (a derogatory term invented by the car lobby to promote their product). That means if you see a gap in traffic and run across you might be unable to step into safety.

Painting unsignalized crosswalks can be an effective tool in dense business districts where plenty of people are walking around and cars are driving slowly. However, pedestrians should never be expected to cross more than one lane of moving traffic between safe spaces. With a second lane drivers are much less likely to respect the crosswalk, and you expose people to the “double threat”, where one driver stops but traffic in the adjacent lane keeps going. Being struck at such a high speed means you are very likely to die. 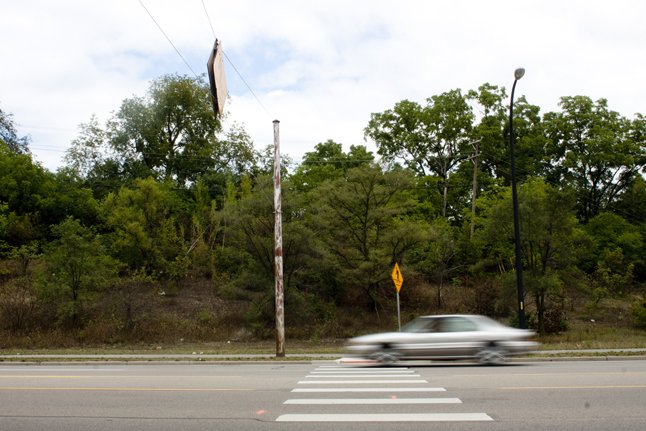 What is the point of this crosswalk? Does anyone really think that car is going to stop?

The design is also very dangerous for bicycle riders due to the high traffic speeds, very wide lanes, lack of even basic bike lanes, and the constant shifting of the lanes around intermittent car parking zones that are never used. The stress of biking on stroads like this one — and the fear of being struck with a 95 percent chance of being killed — causes many people to bike on the sidewalk, which they often don’t realize is even more dangerous. 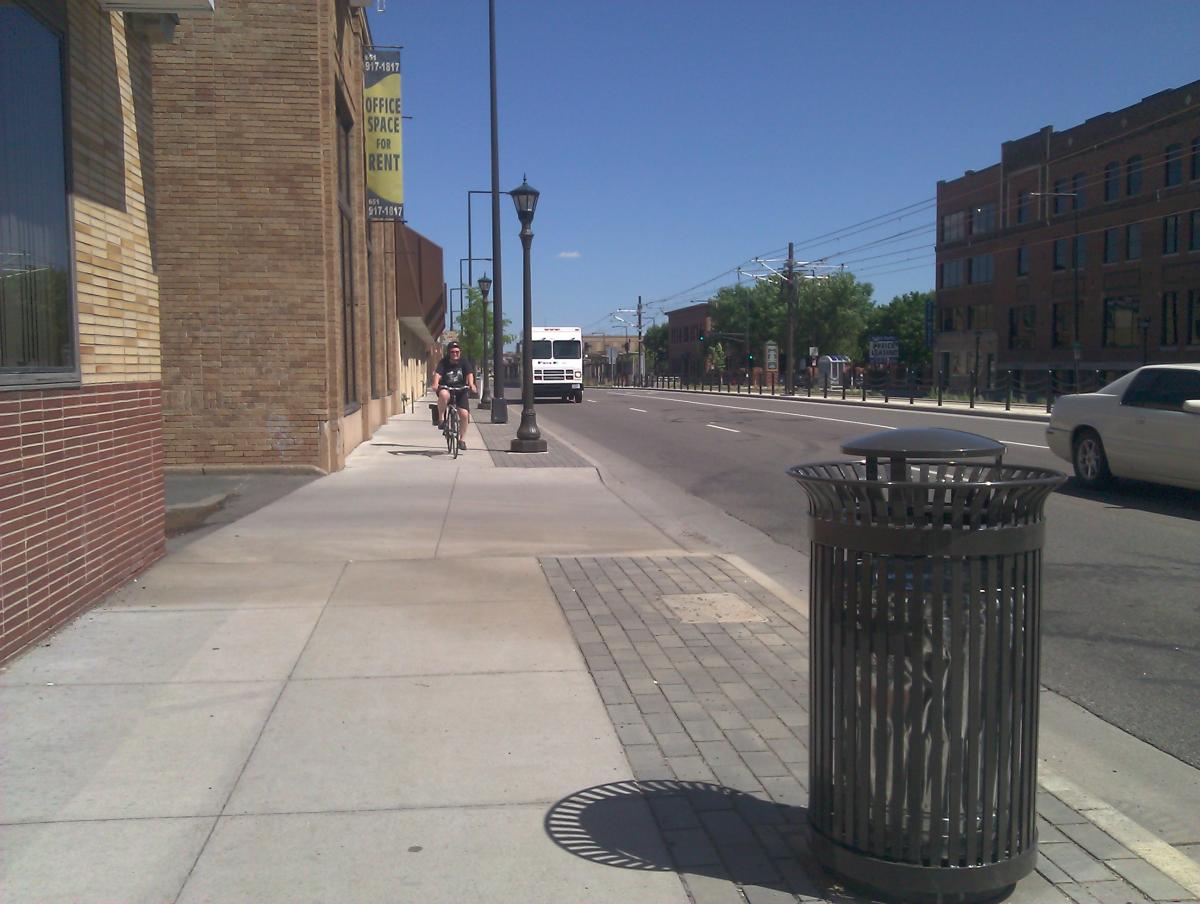 Approaching a driveway with no sight lines and no escape route. 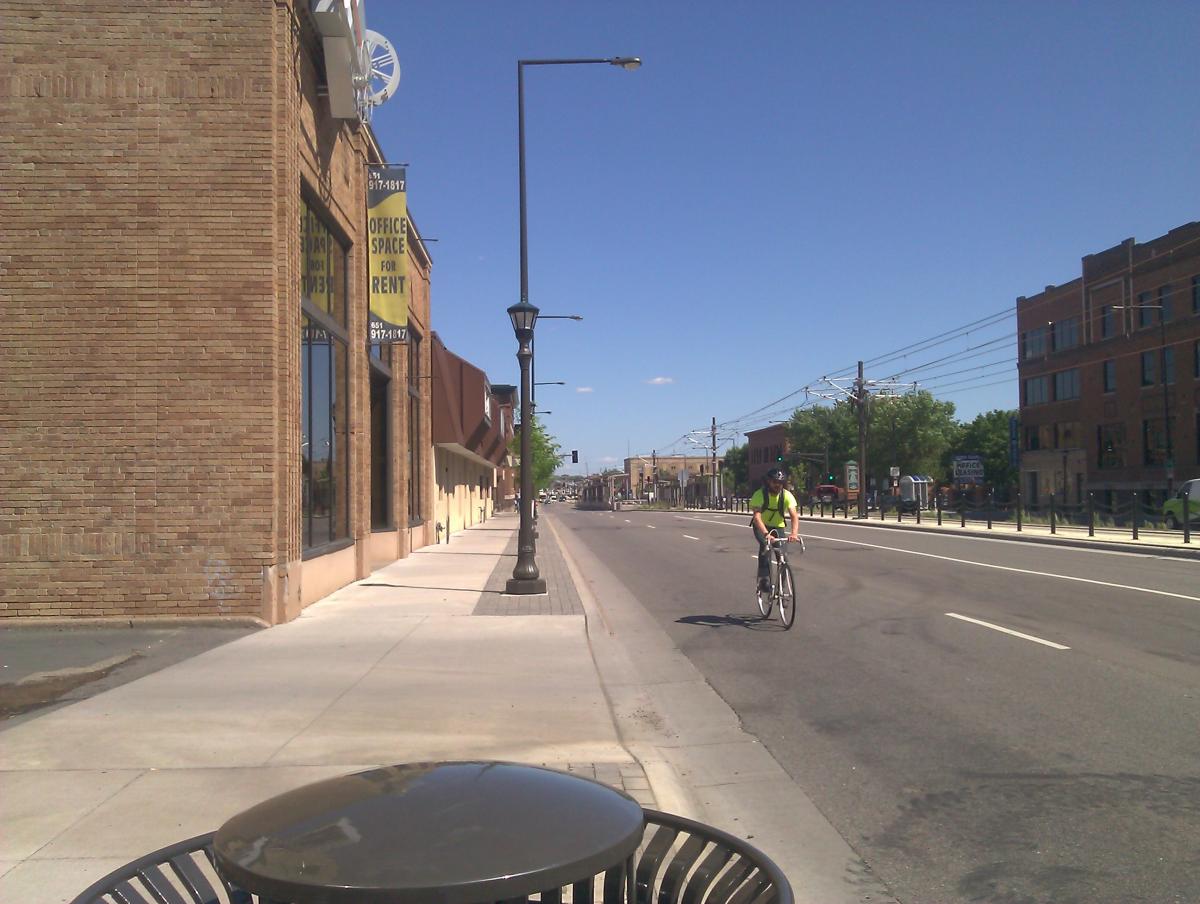 Both cities always say they want to increase biking and walking, and the street was just reconstructed over the past few years. So why was this such a missed opportunity?

Part of the answer is politics: many things were done to placate drivers. The other part is business as usual at MnDOT. Traffic engineers plan streets to accommodate expected peak hour traffic volumes assuming an increase in traffic over several years. That’s problematic for several reasons:

All of this applies to University Avenue: we should remove one more lane on each side to make the corridor safer. There is no reason to over-build streets except to placate the drivers who run the political system. [I am betting there will be no signal priority for transit vehicles, even though there certainly should be, and there will be many car-train conflicts everywhere left turns are permitted.]

Experience in many cities shows that, while you can put all the warning signs in the world, long crosswalks are still too dangerous. Concrete median refuge islands (better or cheaper) should be installed between lanes, or a traffic signal installed to bring vehicle traffic to a complete stop (red signal). The city of Cambridge has a model traffic calming program with many examples such as raised crosswalks, concrete diverters and cycle tracks. I don’t recommend flashing yellow “beg button” pedestrian-activated warning lights since they are usually ignored by drivers, but installing a simple stop sign can be surprisingly effective if drivers are failing to stop without one. 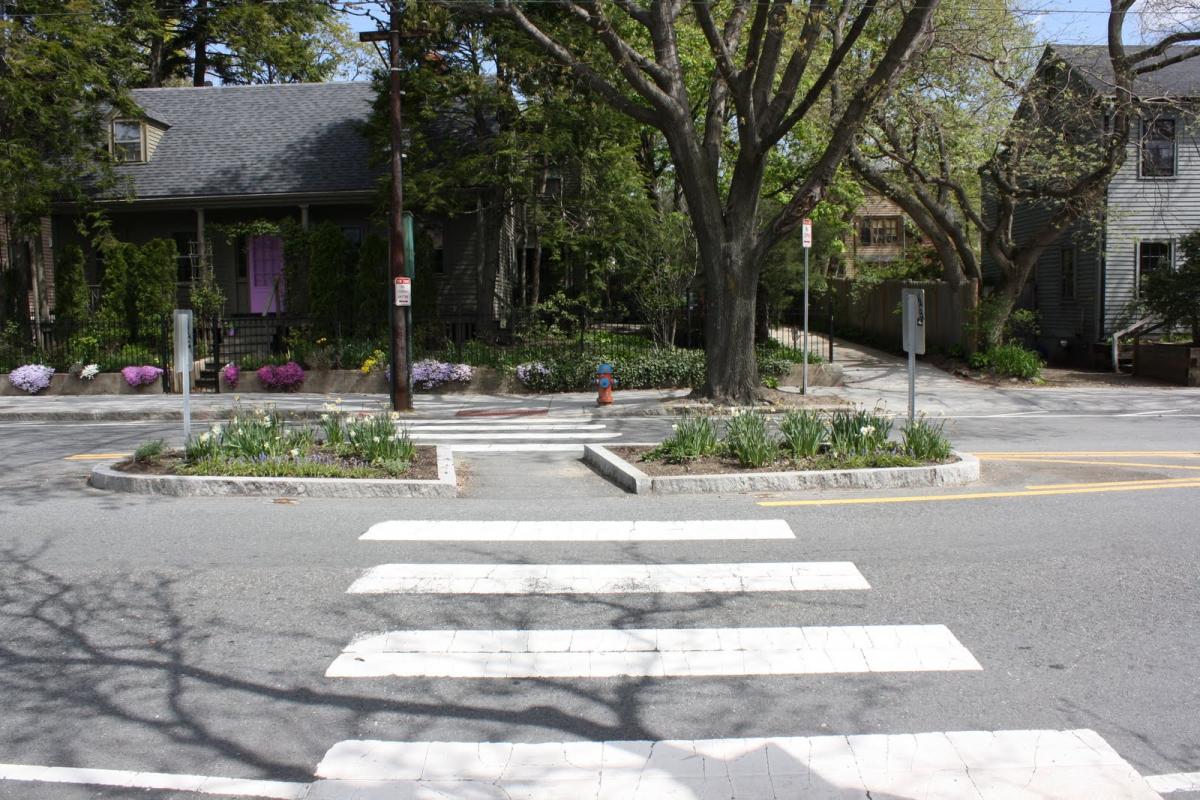 Some solutions for University Avenue might include stop signs, more signals, speed cameras, raised crosswalks and perhaps photo enforcement of crosswalk violations. Most importantly, even if the powers that be refuse to change anything, University Avenue should be consistently held up as a case study of what not to do going forward.

The same issues are present on Minnehaha Avenue. Are the City of Minneapolis and Hennepin County listening?