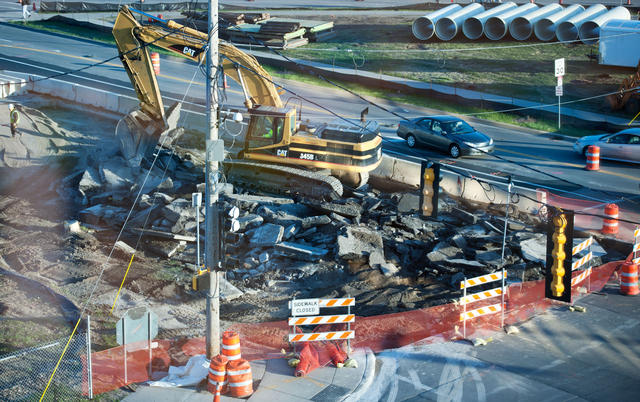 The loud noise of construction on campus is expected to quiet down by November.

All heavy construction of renewing and replacing roads as well as installing and embedding light-rail tracks will be completed by the end of the year, said Laura Baenen, spokeswoman for the project.

Currently, the focus is on the east side of Oak Street, where tracks and pavement have already started to be installed. Work is also being done on the sidewalks and traffic signal systems.

Oak Street at Washington Avenue is currently closed and will have intermittent closures in the next weeks as construction continues.

Tracks and pavement have been laid at the intersection of Washington Avenue and Oak Street. Traffic will be able to travel north on Oak Street by the end of April, Baenen said.

Between Oak Street and Huron Boulevard, construction workers are preparing to place tracks. From 6 p.m. to 2 a.m. nighttime construction will take place between the two roads. This will continue for about the next month.

As students and staff filter off of campus in May, more construction workers will kick the work up a notch, Baenen said.

This summer, traffic on Washington Avenue Bridge is expected to be restored with one lane going each direction.

She said bridge construction has been coming along very well.

Starting in mid-May and lasting through August, Huron Boulevard between University and Washington avenues will be closed for construction.

Work will begin on the south side of University Avenue at the Huron intersection in mid-April and last through the summer.

From August through November, construction will focus on the north side of University Avenue at Huron.

The start of 2013 will be dedicated to installing the light-rail station’s artwork and electrical components. Tracks might start to get tested with operators but without passengers by the end of 2013; however, most of that work will carry over to 2014 — the expected completion year of the project.