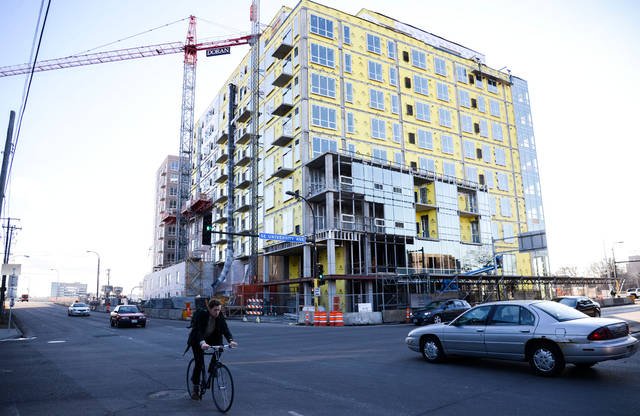 The apartment complex The Bridges is under construction at University and 10th avenues southeast and is set to open this fall. (Photo by Holly Peterson)

While the luxury apartment complexes popping up around the University of Minnesota give students more housing options, off-campus property owners are confident they can compete with the new development.

Landlords say they haven’t seen a significant impact on their business due to the new buildings yet, but they expect them to affect the surrounding market — and neighborhoods — in the future.

Dinkytown Rentals owner Tim Harmsen, who owns more than 50 properties in the Dinkytown and Marcy-Holmes area, said the increased demand for student housing will put pressure on the market, encouraging property owners to renovate older properties and make the area safer and cleaner. This, in turn, will push businesses in the area to offer more services to students, he said.

“The campus town itself is going to condense,” he said. “Next fall, you’re going to plunk probably 3,000 people here, and they all need to eat — they’re all going to need to get some groceries — so services are really going to be under pressure to grow.”

Even with the luxury housing boom, Harmsen said he’s seen an increase in demand for older houses in the area.

Harmsen said he’s noticed that the newer apartment buildings in central Dinkytown are built to appeal to a particular market of students — a market he doesn’t think goes that deep.

“I still think that there’s a lot of pent-up demand; there’s lots of people who want to live in Dinkytown, but they just can’t find anything that really fits their needs yet,” he said.

Marcy-Holmes Neighborhood Association President Cordelia Pierson said the neighborhood welcomes the growth brought by new developments and hopes to see even more diverse housing in the future so that more University students, faculty and staff can live in the surrounding neighborhoods.

“We’d like to see increased housing options locally so that University community members, including faculty and staff, spend less time driving and parking and more time living and participating in community activities,” she said.

Vaith Rentals co-owner Grant Vaith said he hasn’t felt the effects of the market pressure and doesn’t think he will because the company takes care of its properties.

“I think it’s going to affect the people who haven’t kept their properties nice and who aren’t good landlords,” he said, “and the same with apartment buildings who haven’t remodeled or kept their places competitive.”

Math junior Kyler Vossen said he chose to live in a Southeast Como house for the freedom it gives him. The distance from campus is a benefit, he said.

“I personally kind of like the distance,” he said. “It makes me feel like it’s more of a neighborhood feel versus living in a real metropolitan area.”

Dance and kinesiology freshman Callie Rosenbaum said she signed a lease with The Bridges for next year because of its central location and amenities. The fact that the apartment is brand-new also played a big part in her decision.

“No one has used the shower or slept in the beds, which is kind of nice,” Rosenbaum said.

Apartments like The Marshall and The Bridges aim to attract students with their amenities, security and convenience, Klabanoff said, and they’re popular because of it.

But Harmsen said many students are looking for a different kind of experience — one with more freedom and space.

“There’s so much control [in new apartments], you can’t make a key for your boyfriend or girlfriend; you’re just controlled. Completely controlled,” he said. “It’s just a different animal, and a lot of people don’t want that.”

Vossen said he wanted to live in a house so he could have his own bedroom at a reasonable price, which is something Vaith said he hears a lot from students.

“[In Como], you can get a nice place for a little less rent, so we see a lot of people who are sharing a room in more expensive apartments wanting their own bedroom for between $500 to $600,” Vaith said.