While walking down the halls of Broadway High School at Longfellow, where Lutunji Abram, M.A. works, one would think it’s like any other school. The walls display students’ projects, and the halls are mostly quiet except when passing open classroom doors where students and teachers are working.

However, the mission of this school, unlike most, is to educate two generations of learners.

According to the City of Minneapolis’ website, the pregnancy rate among 15-to-17-year-olds in Minneapolis was 39.1 pregnancies per 1,000 during 2009, down significantly from 54.4 in 2007. Broadway High School at Longfellow helps to meet the educational needs of teen and young adult mothers who have not received a high school diploma or GED.

One of the projects displayed on the schools’ walls is The Million Dollar Project, where students describe what they would do if they had a million dollars. Says Abram, the school’s family and community liaison, “When I had my son when I was 16, I wish I had someone who would sit me down and say, ‘Now let’s use some critical thinking skills on money.’”

Part of the million dollars must be set aside for their children’s college funds. Although Abram’s son will soon graduate from law school, she believes the young mothers at Longfellow have an advantage by learning the importance of a college fund while their children are still very young. 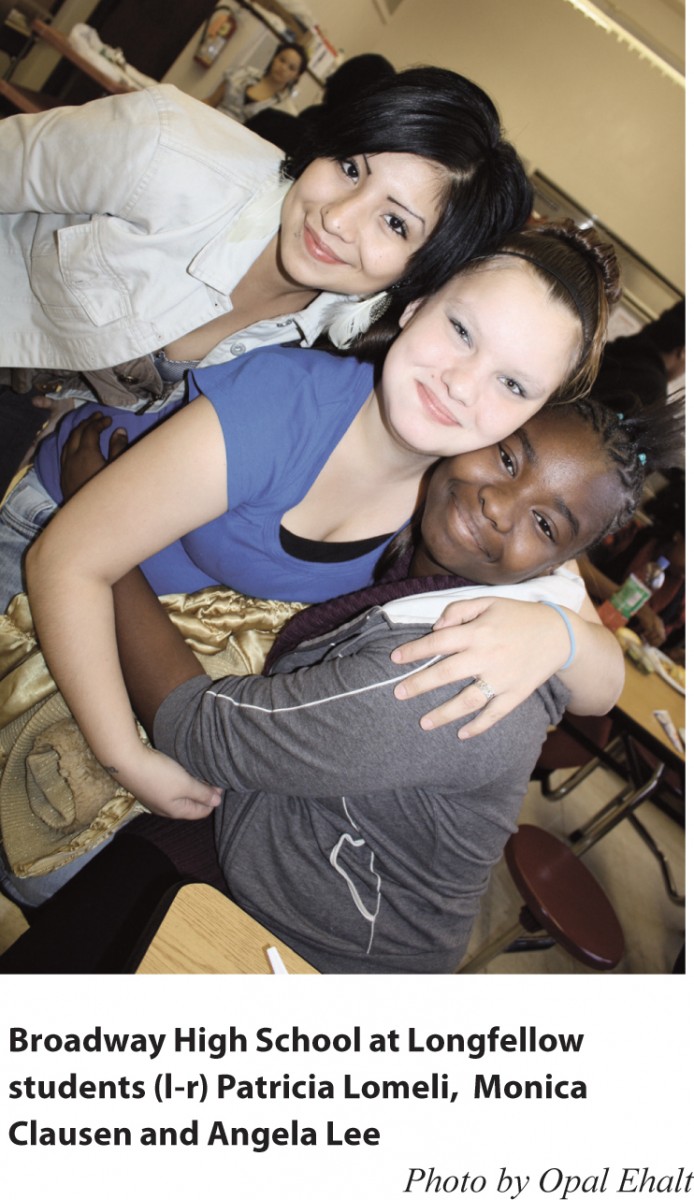 Shannon Myles is a behavioral specialist who also handles transportation at the school. Buses pick up students and their children at home and drop them off at the school doors. Longfellow provides child care for the girls who attend the school at the Longfellow location, plus any overflow from other high schools with teen mothers when their day cares are at capacity.

“Some girls’ kids are older, so [their children] go to either Head Start or outside neighborhood day cares. [Others have] their family keep their kids. The majority of them here at school use the day care here,” Myles says.

Broadway High School at Longfellow’s director since March of last year, Diane Glawe, began transitioning the school from its traditional-school model at its previous location to an area learning center (ALC). ALCs serve specialized populations, and Longfellow’s focus is on credit recovery.

“Most of our students have at some point dropped out of school and come back — not everyone, but quite a few of our students. And so we can serve them up through age 21,” Glawe says.

The department of education doesn’t hold them to the same graduation requirements as other schools, since many of their students are old enough to have graduated before they begin attending Broadway.

“Our goal is to try to catch them up as quickly as we can and get them the skills that they need, so that they can [graduate] before their 21st birthday,” says Glawe.

Unlike traditional high schools where students spend the majority of their day at a desk learning from a teacher in front of the classroom, students at Longfellow have their own work stations: a desk, a computer, and their picture. Most learning is project-based.

“Maybe they are interested in Africa,” Glawe says. “We can make that into a geography…[or a] world history project… [There is] a huge chunk in their day where they self-design projects [around their interests], and their teachers help them apply [projects] to the standards that are required for graduation.”

Students also have access to all of the online courses offered by Minneapolis Public Schools. If their class schedules are interrupted by a six-week maternity leave, a sick child, or bed rest due to a complicated pregnancy, students can continue their education working on projects or online from home.

Clementine Reid was a school librarian in Kentucky before she moved to Minnesota. She has now been caring for infants, toddlers and preschoolers and is a student specialist in the Teenage Pregnant/Parenting Program (TAPPP), currently at the Longfellow site, for 18 years.

“We try to do things that are developmentally appropriate from babies [in age groups] six weeks to 16 months, to toddlers, to preschoolers. And the thrust is always getting them ready to go into school,” Reid explains.

Yet, learning at Longfellow doesn’t stop with educating students and their children; it includes how they interact with one another. Weekly parent/child-interaction time brings staff and students along with their children together to learn to interact in ways that promote healthy development. All students take parenting classes, which include a prenatal teacher for pregnant moms and an early childhood family education teacher who leads parenting classes.

“The moms are the baby’s first teachers, so we give them the information so that they can do that job, in addition to keeping the babies while they are in school. It’s a learning process for all of us,” Reid says.

Longfellow staff members believe they are successful by creating multiple levels of support for their students. Abram is proud to announce a new level that bridges students with their community. She recently began a mentoring program welcoming members of the community to support students’ continued success.

This means “one-on-one mentoring where they would literally take the young lady under their wing and guide them through…and help them transition to post-secondary [institutions],” Abram says, She is looking forward to receiving calls from community members who will serve as role models, offering these young mothers and their children yet another level of support.

For more information about Broadway at Longfellow High School, or to find out about their mentorship program, contact Lutunji Abram at 612-668-4714.