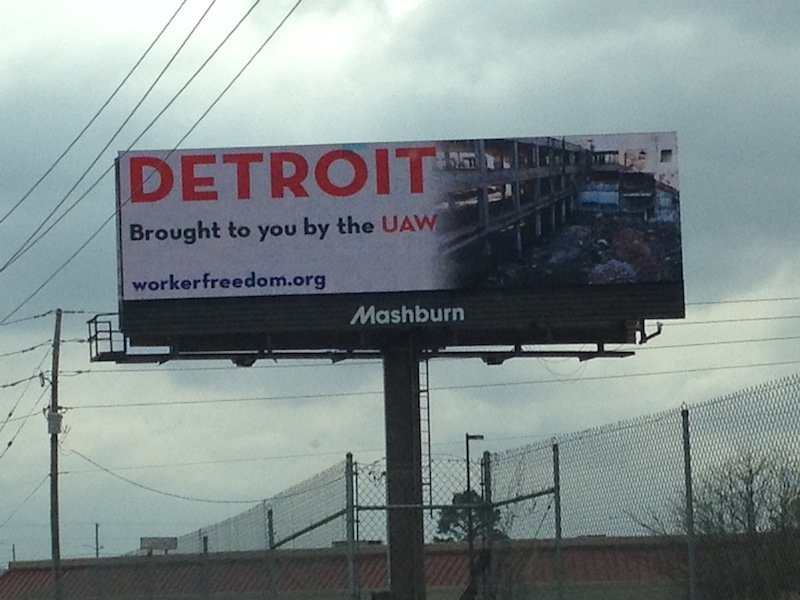 The workers at the plant are voting on whether or not to join a union. The vote is controversial, setting the company and local politicians at odds with each other in a bitter struggle playing out in the press and even on billboards around town. If you think you’ve seen this story before, hold on a moment.

In Chattanooga Tennessee the workers are finishing up voting to possibly join the United Auto Workers (UAW) today. Volkswagen, the owner of the plant, has no official position on the vote but were the ones who initiated the process last October. The opposition comes from local officials who are terrified of unions coming in. They’ve made it clear that if the UAW successfully organizes the plant they will cut off all future tax breaks and generally make life difficult for VW. Welcome to a new world of global companies meeting the strange cultural war of the USA in 2014.

The plant itself is a remarkable facility. It is the first LEED Platinum certified auto plant in the world, with 33k solar panels and an elaborate waste water recovery system. It employs 3200 people and was built with a cool $1 Billion invested by VW matched with $577M in local tax incentives. The plant opened in 2011 with production of 85% of a VW Passat sold in North America all coming from this one facility, an unusually concentrated amount of production. It’s a truly remarkable plant in many ways, and Tennessee lobbied hard to win VW’s investment over Michigan and Alabama. 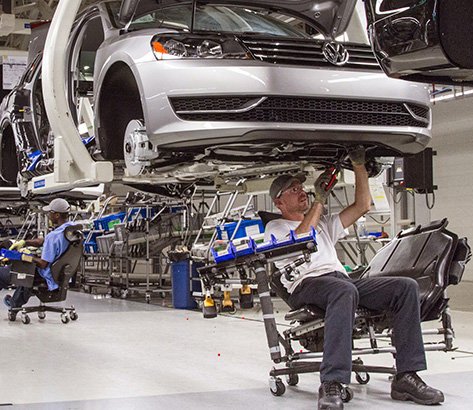 There was only one problem with the plant, as far as VW was concerned. All of the other VW facilities around the world operate with what’s called a “Works Council”, or an employee run system of providing input to much of the daily operation of the plant. This is a typical German system that has proven to be very effective for VW. It’s part of their process of engaging workers to ensure a quality product and a happy, dedicated workforce.

In order to put such a system in place here in the US, VW found that it only made sense to unionize the employees – as they are in Germany. Last October the UAW agreed to run the Works Council, a first for them, and treat the VW contract as fundamentally different from the way they deal with other US automakers. All that stood in the way was the organizing vote among the workers, taking place 12-14 February.

If that sounds like a great compromise between labor and management, you’re far from alone. But not everyone would agree with you.

Tennessee Governor Bill Haslam and Senator Bill Corker are both livid, to say the least. They see their state’s competitive position as being fundamentally non-union, and they are responding as if the UAW is something like a virus coming in to infect their state. Nevermind that the steel mills of Alabama have been union for a century – the line is that Dixie must remain union-free to continue the rapid growth they have seen over the last few decades.

That’s why Gov Haslam and legislative Republicans have warned that if the UAW organizes the plant VW can forget about future tax breaks if they want to expand. Anti-union groups have put up billboards around town telling workers that the UAW created the mess we now call Detroit, featuring a nasty picture of the old Packard plant in the Motor City. Grover Norquist, among others, is a leader in the fight and bringing in a lot of national money to influence the workers to reject the UAW.

In desperation, Sen Corker announced on the first day of voting that if the workers reject the UAW, VW will expand the plant to build a new SUV. This left everyone puzzled, largely because it goes against everything VW has said and done so far. The company has tried desperately to keep out of the fracas, given their goal of simply organizing a Works Council like they have everywhere else. The company quickly denied Sen Corker’s statement, but is clearly trying to say as little as possible to avoid being dragged into domestic politics.

What will finally happen? The final decision will rest with the good workers of the plant, as it should. They get to decide how this chapter of the story ends. Most observers think they will approve the UAW and VW will get its Works Council.

But, of course, it won’t stop there. A global company that is clearly trying to run with modern efficiency, worker relations, and respect for the environment has run headlong into domestic politics and an ideological war that they had no idea would be so divisive. What should be a simple process has become twisted and surreal.

The version of the story you were probably expecting, where workers organize and overcome bitter opposition from management? So old school. That story, like everything else, has succumbed to a political and cultural war that no one involved could have ever anticipated.

At top: One of the billboards around Chattanooga.