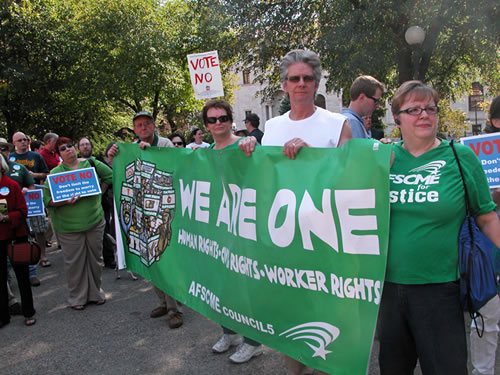 Displaying a large banner that read "We Are One," AFSCME members took part in the rally opposing two proposed constitutional amendments.<br><br><em>Photo by Michael Moore

More than 100 people joined a union-backed rally Sunday in downtown St. Paul, voicing their support for statewide campaigns to vote “no” on constitutional amendments that would restrict Minnesotans’ freedoms and hurt their quality of life. The state’s largest labor federation, the 300,000-member Minnesota AFL-CIO, opposes both constitutional amendments on the Nov. 6 ballot. One would limit the right to marry; the other would institute identification requirements limiting Minnesotans’ ability to vote.

Rally emcee Sue Scott, a member of SAG-AFTRA and a performer on public radio’s “A Prairie Home Companion,” called the amendments a calculated attempt to drive a wedge between Minnesotans. She urged union members not just to vote “no,” but to “vote no way!”

The voter restriction amendment, if passed, will require state and local government to implement a costly new system for conducting elections – at a cost to taxpayers of more than $50 million.

“It may seem like common sense,” McClenty said, “but it’s an extreme makeover of a successful voting system.”

Bill Moore, president of the Minnesota State Retiree Council, AFL-CIO, called the photo ID requirement an assault on voting rights that would move the state backwards.

“I have a right to be presumed to be the person I say I am,” he said, adding that photo ID requirements “presume I am guilty of voter impersonation until proven innocent. It’s backward.”

Although “Vote No!” was the slogan of the day, some in the Rice Park crowd added a caveat, asking St. Paul voters to vote “yes” on a levy referendum for the St. Paul Public Schools. The levy question will appear on the opposite side of the ballot as the constitutional amendments.

“We’re asking people to vote ‘no’ twice on the front, and vote ‘yes’ on the back,” said Sue Snyder, a member of the St. Paul Federation of Teachers.