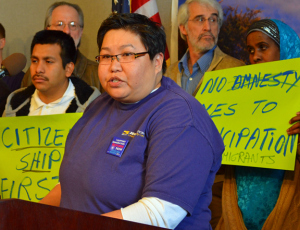 U.S. citizenship isn’t something Mitch Azarcon takes for granted – not after watching her Filipino-born mother wait 25 years to move her family to the United States. Now Azarcon, a surgical core technician at Rochester Methodist Hospital, is exercising her rights as a citizen, taking action through her union, SEIU Healthcare Minnesota, to change federal law and make it easier for people like her mother to realize their dreams of becoming U.S. citizens.

“America is my home, and I am an active citizen,” Azarcon said. “During this last election I knocked on doors, phone banked, passed out fliers – everything in my power to participate. We helped elect leaders who will do the right thing for immigrants in this country.”

Union members like Azarcon form a critical bloc in a broad-based coalition supporting the immigration-reform effort declared a priority by President Obama earlier this week.

Locally, the coalition includes business, student, religious, civil-rights and labor organizations, and their representatives gathered at the Minnesota Capitol Wednesday to demonstrate their shared commitment “to doing what a broad swath of Americans want: to finally, once and for all, win comprehensive immigration reform,” said Javier Morillo, president of SEIU Local 26.

At a press conference, Morillo and other speakers stressed that immigration reform must include one “essential” component: a practical path to citizenship for the 11 million undocumented immigrants now living in the U.S.

Without a path to citizenship, families like Luis Enrique Gomez’s will continue to be split apart. Gomez, who lives in St. Cloud, has been ordered to return to his native Mexico by March 9. If he complies, he said, he will be forced to leave behind his two U.S.-born children.

“I think we need to keep together families,” Gomez said, gripping a photo of himself with his arm around his children. “It can cause psychological problems, separating kids from their parents.”

Rather than labeling workers like Gomez “illegals,” U.S. policy should “recognize that (immigrants) are simply responding to economic forces on both sides of the border,” said Rev. Paul Erickson, an assistant to the bishop of the St. Paul Area Synod of the Evangelical Lutheran Church in America. Immigration policy is not just about borders and security, Erickson added, “it’s about real human lives.”

It’s also about workers’ rights, which is why Minnesota’s unions, according to Minnesota AFL-CIO President Shar Knutson, are “fully engaged” in the push for “common-sense, comprehensive immigration reform.”

In addition to SEIU and the Minnesota AFL-CIO, which together represent more than 330,000 union members statewide, UNITE HERE Local 17, Local 1189 of the United Food and Commercial Workers and the community-based group Minnesotans for a Fair Economy also have pledged support the immigration-reform effort.

The reason, Knutson said, is simple: A rising tide lifts all boats.