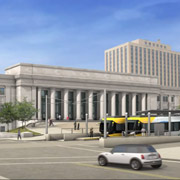 The Ramsey County Regional Rail Authority is looking for a private partner to lease, develop and operate a bicycle sales, service and secure storage center at the restored Union Depot when it opens in early 2013. Deadlines for response to the authority’s request for proposals are approaching, beginning with a conference and site tour on January 10. Proposals are due by February 21.

Plans call for a 3,300-square foot ground-level bike center fronting on Sibley Street with lockers, restrooms, showers and possibly bicycle rentals and food-beverage offerings. A million annual travelers are projected to pass through the depot by 2014, when the Central Corridor light rail line begins operations. Traffic will grow further over the following decade with intercity and local buses, Amtrak trains and commuter rail lines converging on the historic depot, which is undergoing a $243 million renovation.

“This beautiful station surrounded by homes, offices, eating and shopping will build upon the vibrant arts and cultural programming that already blossoms in the neighborhood,” said Jim McDonough, the rail authority chairman. “Public-private partnerships will help us achieve our vision of making the Union Depot one of America’s great public buildings and transit hubs for the 21st century.”