Five years since the housing bubble burst, and more than two years after a deadly tornado swept through, hard hit areas of North Minneapolis and nearby neighborhoods in the west metro region are still struggling with an enormous loss of home wealth, expensive and hard-to-find rental housing, and lagging incomes.

“The housing collapse hit here first before it spread to other neighborhoods,” said Lynette Stewart, a north side resident whose family is struggling with an eviction notice from Freddie Mac. Neighbors were forced out of homes and rental properties sat vacant, then the May 22, 2011 tornado struck, killing two and damaging 3,700 buildings on the north side.

Stewart estimates that from a quarter to a third of the housing units in her Near North area are vacant. “The whole area is dotted with boarded up properties.”

Inflation adjusted median home prices in areas of North Minneapolis, Brooklyn Park and Brooklyn Center—which were examined for this study—are still about $110,000-$120,000 below peak values. All three areas tell a similar story as the Camden neighborhood, where median home prices rose to about $196,000 in 2005 (in 2013 dollars), according to the Minneapolis Area Association of Realtors. By 2011, real median home prices bottomed at about $47,000, before recovering to $75,320 last November.

Jean Bain, a realtor and coordinating consultant to the Northside Home Fund, said there were 316 vacant and boarded up home properties in North Minneapolis at the end of 2013. That was an improvement from 2009 when there were 558 such properties, she said. Some of those properties have been cleared; new housing is being constructed in some cases.

A sign of progress, Bain said, is the declining foreclosure rate on housing properties. There were 1,558 foreclosure actions in 2007. Those actions have dropped 81 percent, to 301 foreclosures in the past year.

Despite this improvement, five years of people vacating houses and a near halt in single- and multi-family housing construction has made an already tight rental housing market even tighter, with rental vacancy rates at about two percent. This has sent rents upward at a time when real household incomes are shrinking both statewide and in the metro.

Minneapolis city planners, in their Quarterly Trends report, found rental prices increased 23 percent, adjusted for inflation from 2006 to last year. By 2012, Twin Cities rental prices were considered burdensome for 71 percent of renters’ households with incomes under $50,000 a year, under federal housing standards.

Camden (55412), for instance, saw a 23 percent increase in median gross rent from 2000 through the 2008-12 period, while renters’ median household income fell by nearly 40 percent. Even in many places where there have been modest housing price gains since 2000, incomes have not kept pace, as the maps below show. 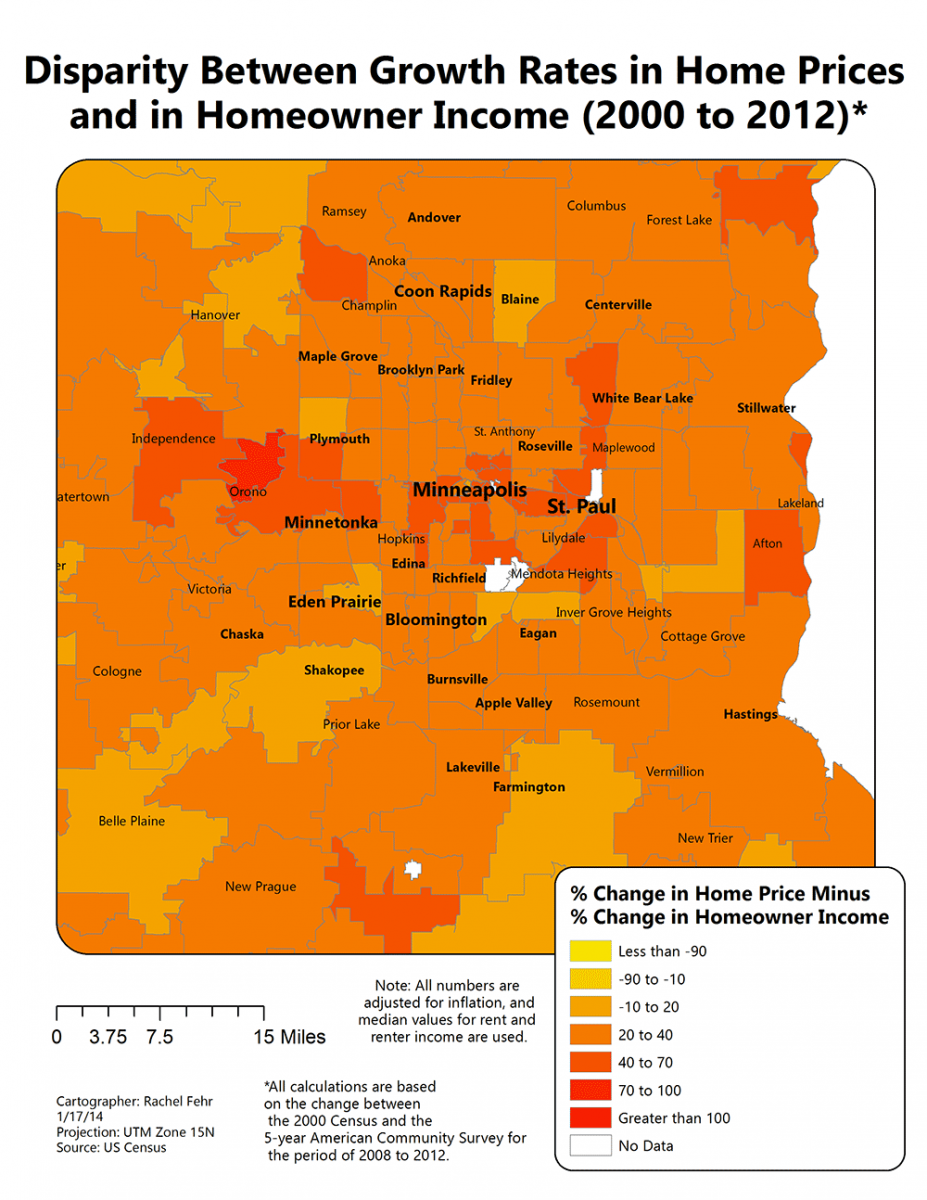 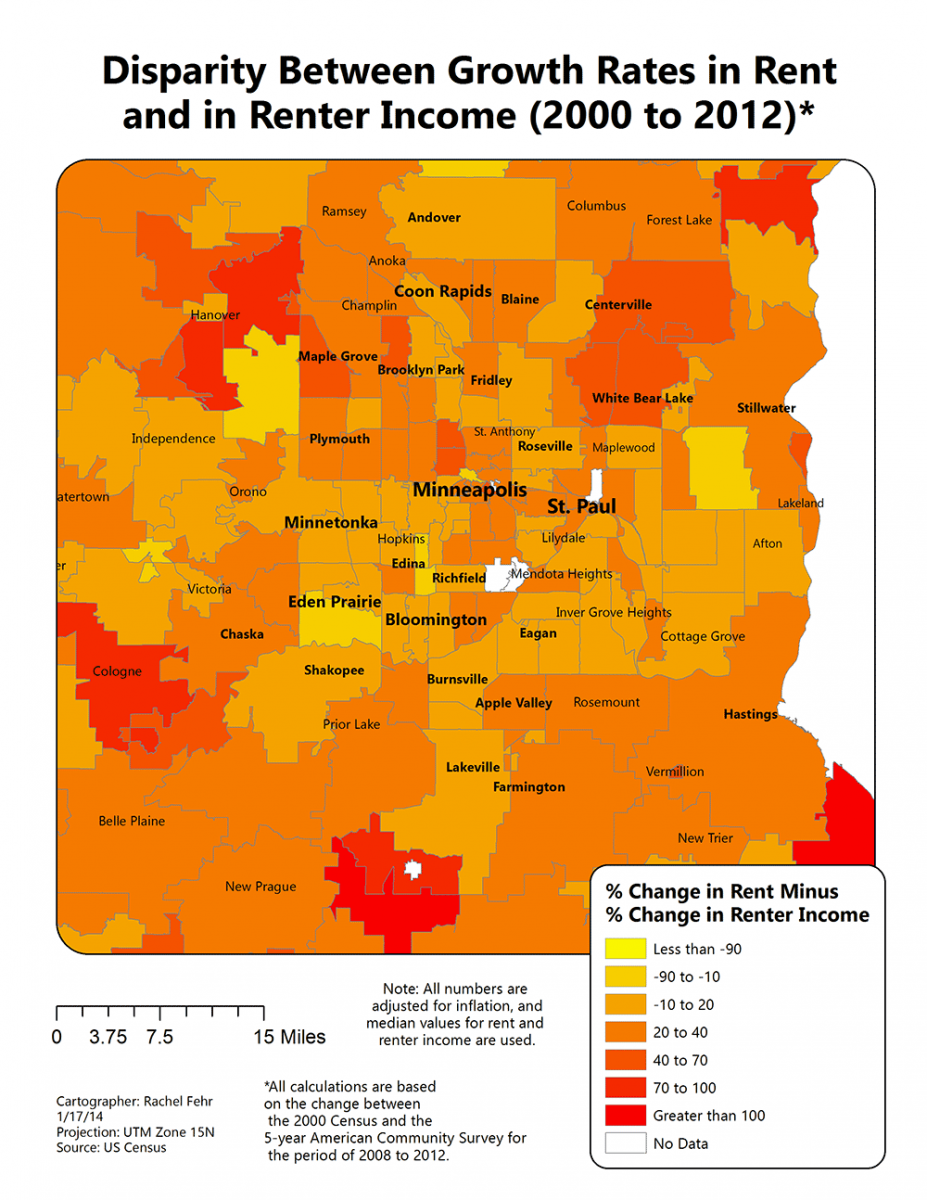 Similar differences are found in Near North neighborhoods, with rents rising and renters’ median household income falling by 24 percent over the past decade.

The trend of higher median gross rents and declining renters’ incomes continued in the large suburb of Brooklyn Park (pop. 77,752). However, this gap varied greatly depending on the neighborhood, with inflation–adjusted rents modestly outpacing real incomes in some areas and wide rent-to-income disparities in other parts of the city.

Brooklyn Park assistant city manager Michael Sable says the city is trying to figure out how to effectively manage rapid changes in the area, “Either by good planning or by good luck, we have talented people looking at how we are changing and what we need for planning, job training, housing, and infrastructure going forward.”

Part of the reason might be Brooklyn Park’s wide population diversity, which already reflects demographers’ projections for America by the year 2030. That is when population will be evenly balanced between people who are called “white” by Census takers, and people of other races or ethnicities lumped together as “non-white” in statistics.

“We’re already there,” Sable said, so community activists, officials, educators, business leaders and others are working on strategic planning to keep household incomes rising and mixed, affordable housing for all.

Moving forward, city planners, state policymakers and business leaders must continue working to build affordable housing and raise wages. This legislative session we have a chance to step forward on both. Raising the minimum wage would make it easier for those at the lowest end of the wage scale to cover housing costs each month. And for housing supply, we must pass $100 million in state bonding this session to build more affordable housing and to preserve what we do have, such as our public housing stock.