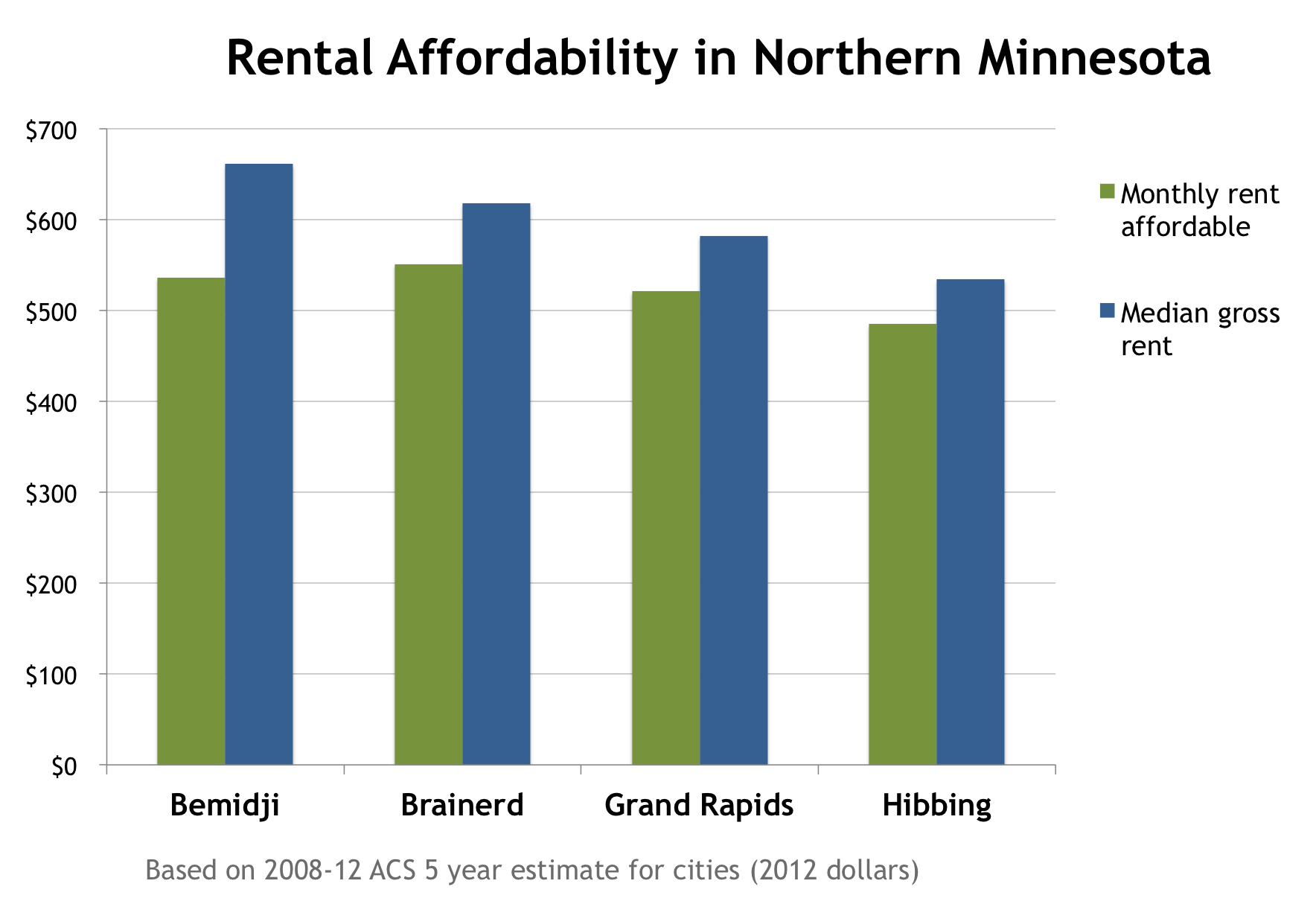 Greater Minnesota, has faced a devastating foreclosure crisis, but it has played out very differently than in the Twin Cities metro area in the years since 2008’s housing crash.

In the population centers across the state’s northern tier examined for this piece, the crash developed slowly. While home prices rose slightly pre-crash, a huge bubble never formed. There weren’t slews of sub-prime loans or adjustable rate mortgages being written. With the exception of a few lake towns, massive home construction never occurred in northern Minnesota.

Find more articles in the Uneven Recovery series, an on going collaboration between Minnesota 2020 and Minnesota Housing Partnership.

Instead, the Great Recession’s housing crisis-induced tidal wave is what hit Northern Minnesota. When people lost jobs in the Great Recession, they lost homes. And when the economy tanked, renters, already in a more precarious economic position, were hit hardest.

Overall, there’s been a slight rebound in housing prices and income, but for most who’ve lost jobs in the wood products, mining, and outdoor recreation industries, a home is out of reach, and making the rent is a struggle.

Between 2006 and 2012, homelessness increased across the entire Northern region, and more than doubled in Northwestern Minnesota.

Below we consider the current housing scene since the height of the foreclosure crises and recession.

Bemidji and the surrounding area

Homelessness and access to affordable housing have become more severe for low-income and out-of-work people in north-central Minnesota. Bemidji stands out as one economic, cultural and service-providing hub, and was not spared by the foreclosure crisis and recession.

Inflation-adjusted median household income has declined by $2,800 in Beltrami County and $4,800 in Itasca County since 2007, according to SAIPE data from the US Census compiled by Wilder Research.

Housing affordability in this region will likely remain a persistent problem until forestry and its related industries find new uses for the timber that once supplied the now declining printed magazine industry. Loggers harvested 2.7 million cords of timber this past year, less than half their potential, said James Skurla, director of the Bureau of Business and Economic Research at the University of Minnesota-Duluth.

The slow economy is squeezing homeowners and renters. In just Beltrami and Itasca Counties, there have been over 1,300 foreclosures combined since the start of the crisis. And renters fare worse. Affordable monthly rents, based on renters’ median household income cost $536 in Bemidji and $521 in Grand Rapids. Yet actual median rents are more than that: $661 and $582 respectively.

Local governments and service organizations have made some progress in building and providing “market-rate” housing by helping developers, said Tim Flathers, executive director of the multi-county Headwaters Regional Development Commission. But not much of it is for low-income families, so affordable rental housing remains scarce.

The lack of affordable housing and slow job recovery has expanded the waiting list at Bemidji’s Conifer Estates, which has both market-rate rents and thanks to city assistance affordable housing units. And admissions are up at Village of Hope emergency homeless shelter.

Homelessness in the 12 Northwest counties has more than doubled since 2006 to almost 700 people per night, according to Wilder Research.

For those who held on to jobs and houses, there’s a slight uptick underway. Median home prices never really skyrocketed in this area; therefore, the declines were more modest. Bemidji values, for example, are now about $10,000 above their 2011 lows, but still about $30,000 below their pre-crash peak.

On the Iron Range, which is heavily dependent on mining for its economic base, foreclosure is part of a much older story.

For decades, Hibbing and Iron Range communities have taken big hits in housing with setbacks to the iron mining industry, said Kari Kilen with the St. Louis County Assessor’s Office in Hibbing. Employment in mining fell from about 25,000 jobs in the early 1980s to about 5,500 jobs now.

Without a housing bubble to burst, any recent declines in home values were more modest than in most parts of Minnesota and the nation, Kilen said.
Still, Hibbing and Iron Range residents who remained after the mining jobs were lost have struggled finding affordable housing. Monthly affordability based on renters’ income is about $485, yet actual median gross rent is about $530, according to ACS’s 2008-2012 data.

Jackie Prescott, executive director of the Hibbing Housing Authority, said the city has more than a six-month waiting list for affordable housing. Apartments with two or more bedrooms are in especially short supply. And the rental stock, suffering from years of disinvestment, is too often of very poor quality.

About 200 new mining jobs have been added in the past year by Minnesota DEED calculations, but area residents will need more than that to turn around housing in the area.

The Brainerd Lakes region—a playground for seasonal visitors—was hit hard when the foreclosure crisis caused many lake homes to go vacant. People lost jobs in the recreation and hospitality industry, and that exacerbated the slowly-forming housing crisis for year-round residents. Crow Wing County’s foreclosure rates topped out at 1.6 percent in 2009, significantly above the state average at the time. They have since declined to 1.1 percent, still slightly ahead of the state average.

Median home prices in Brainerd and Baxter lost $60,000 to $70,000 in value by 2011, the general statewide housing price low-point, and have made only modest recoveries since.

Unfortunately, data about whether the foreclosures were mostly lake homes or people’s residences is hard to come by. But with Crow Wing County unemployment peaking as high as 13% during the recession, and still far above the state average now, rental affordability remains a significant issue, with median prices about $70 higher a month than what’s considered affordable based on incomes.

Central Minnesota, which includes Crow Wing County, saw its homeless population grow by about 170 to more than 600 between 2006 and 2012.

Churches in the Brainerd and wider Central Minnesota region provided temporary, or transitional housing services for 67 homeless adults and 87 children in 2013. Every night, 21 churches linked with the New Pathways nonprofit at Brainerd help people with warm, temporary housing.

Kathy Carlson, program manager and family educator, said her organization only begins filling the need. Approximately 100 families were turned away in 2013, settling for shelter in cars, tents and icehouses.

There are signs of progress when it comes to building more affordable housing, and a way forward when it comes wisely using and leveraging more state and federal funds to support this effort. Next week we’ll explore exciting advancements in Grand Rapids.