Other than a few isolated pockets of Minnesota, housing costs are far outpacing salaries. Just take a look at the camouflage-looking maps below. Most of the state is gold and orange, showing that the percent change in housing costs have increased anywhere from 5 to 100 times more than the percentage increases in salaries in 2013 dollars. In some areas of Minnesota, the gap is greater than 100.

Some rental affordability issues are due in-part to the recession:

“[T]he wave of foreclosures and housing market collapse halted most single- and multi-family housing construction. This supply restriction coincided with an increased demand for rental housing, as tens of thousands of foreclosed homeowners flooded the rental market. The stock of rental housing, already in short supply in many areas, widened the affordability gap for renters, especially lower-income families, senior citizens, and people with disabilities.”

But the recession can only bare so much of the blame, especially because housing prices outpaced salaries over the last 12 years as well. It’s fair to say the housing crash has wiped away any artificially high home values. With that in mind, there should be way more yellow (showing that prices and salaries have stayed in line with each other) and blue (showing salaries are growing faster than home values). That’s not the case.

For a more interactive look across the state, click the links and see the trends in your zip code. 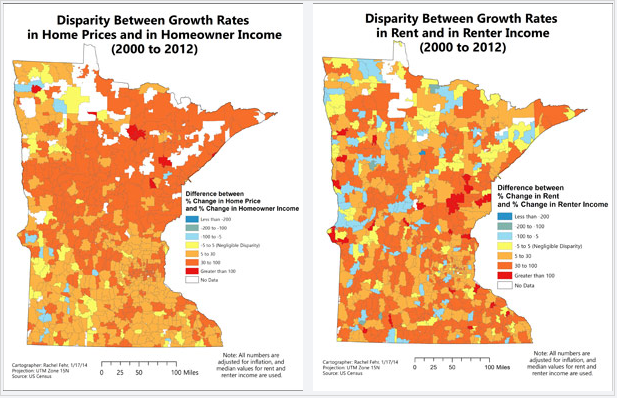 In reality, salaries and quality job creation are falling far short of what’s needed for most Minnesotans to better afford housing and stay in the middle class or move into the middle class. Statewide median household income has decline by $6,700 adjusted for inflation, since 2000, according to Census Data compiled by Wilder Research. This declining income trend is consistent in every region across Minnesota.

There’s a market failure here that needs public policy attention to correct. There are two public policy measures we can take now to help folks find stable, affordable housing. First, raise the minimum wage. In most of Minnesota, minimum wage renters must put in between 62-96 hours a week (depending on family size and location) to afford housing. The problem is even worse in the Twin cities, where average rents are around $980.

We also need to invest more in affordable housing. Advocates are calling for $100 million in state bonding this session for subsidized housing construction and upgrades to existing public housing.