How’s the housing market recovery going and what does it mean for Minnesota’s homeowners and renters?

Minnesota 2020 and Minnesota Housing Partnership set out to examine and profile the housing crash’s impact on select communities most heavily impacted by the foreclosure crisis in Minneapolis, St. Paul, the suburbs, exurbs, and Greater Minnesota. Over the coming months, we’ll use articles, blogs, maps, graphs, videos and online discussions to highlight stories and data from these communities.

In most areas we observed, a modest recovery is in the works for homeowners. Still, values are significantly below their 2005-2006 peaks, even when adjusted for inflation in 2013 dollars.

Furthermore, the wave of foreclosures and housing market collapse halted most single- and multi-family housing construction. This supply restriction coincided with an increased demand for rental housing, as tens of thousands of foreclosed homeowners flooded the rental market. The stock of rental housing, already in short supply in many areas, widened the affordability gap for renters, especially lower-income families, senior citizens, and people with disabilities.

In low-income urban areas, families seeking the American dream lost wealth and homes. Unlucky renters living in properties owned by investors also lost when their homes went into foreclosure. While median home values in the urban communities examined in this report are higher than they were in 2011, on average, neighborhoods in North Minneapolis, St. Paul’s Eastside and Frogtown have lost 57 percent in median home value from the 2005-2006 peak.

Generally suburban communities now have home prices higher than 2011’s lows. However, there’s a dual story in suburbia. While not losing quite the value of their urban neighbors, Brooklyn Center, West St. Paul, and Spring Lake Park came out of the recession worse off than suburban counterparts, losing 44 percent of their median home value since the market’s height.

Moving to the Exurbs

Exurban communities are seeing a fairly mixed recovery. We took the closest look at Albertville and St. Michael, which are back from the deepest depths of the housing crash, recovering 21 and 15 percent respectively from their 2011 lows. However, median home values are still roughly 33 percent below their 2005-2006 heights. 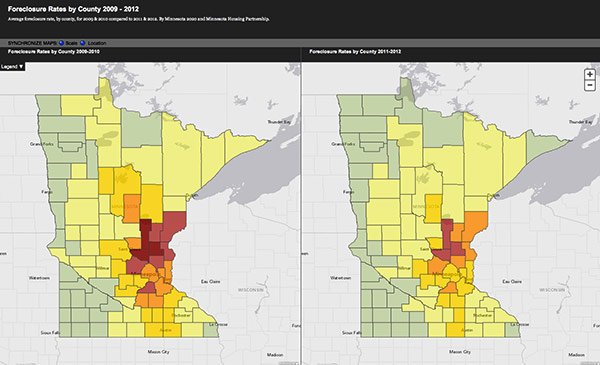 As the maps show, exurban communities experienced especially high mortgage foreclosure rates, with Isanti, Sherburne, and Chisago counties comprising three of the top four respectively in average countywide foreclosure rates between 2005 and 2012. As we move past county-wide analysis, digging deeper into communities, we’ll drill down on certain zip codes in rural areas and within Hennepin and Ramsey Counties hit especially hard by foreclosures.

A View from the Countryside

Greater Minnesota’s housing recovery tells distinct stories depending on location and industrial ties. For many, the worst is over. A few pockets, however, were generally immune to the Great Recession. Southern Minnesota towns largely avoided a housing crash because their economies were tied to agriculture, which remained strong in the economic downturn.

Those areas hard hit in northern Minnesota that we will be featuring—Bemidji, Baxter and Brainerd—all experienced sharp declines in median home prices, with mixed but generally modest recoveries by 2013.

Another area this series will examine is housing affordability in these same locales across the state; salaries have often lagged, especially for lower income renters, in comparison to housing costs during the recovery.

“We still have severe problems with affordability and availability,” said Jan Plimpton, executive director for Habitat for Humanity of Minnesota. “Those are the two big questions everywhere. It is a problem in every county in the state.”

Census and other data show 58 percent of Minnesota households with $50,000 or less in annual household income now pay more than 30 percent of income for housing, including 66 percent of renters. That 30 percent threshold is where federal guidelines determine housing costs are burdensome by competing with food, medical, transportation, energy and clothing costs.

As this series of articles progresses, data on Minnesota communities will support the unified call to action from housing groups for the 2014 Minnesota Legislature to approve state bonding for housing construction and rehabilitation of existing properties. It will also support federal efforts to properly fund Department of Housing and Urban Development (HUD) and USDA Rural Development housing programs.

This call to action comes even as some economic measures show a slow but steady recovery underway in Minnesota and nationwide. However, when families and workers can’t afford stable homes, severe housing problems threaten to hold back our state’s economic progress.