When the housing crash hit five years ago, no East Metro or St. Paul neighborhood was spared, but the East Side and Frogtown – more formally Thomas-Dale – neighborhoods were especially impacted by foreclosures, property abandonment and loss of family wealth tied up in homes.

These are the neighborhoods that have always held out a “Welcome” mat for new Minnesotans. The housing crash has wiped out much of the economic gains of residents, new and old alike.

This loss in wealth spills over on everyone in the communities. From 20 to 25 percent of dwellings are abandoned in some areas, Erchul said. This squeezes the supply of rental property and raises the cost of rents at the same time household incomes have steadily declined. Early during the housing market collapse, American Community Survey data showed housing costs were already burdensome by 2009 for a third of East Side homeowners and more than 50 percent of renters under federal guidelines, and households facing housing burdens have increased for both groups in the four years since.

Only the North Minneapolis neighborhoods—profiled in this series’ article last week— have had a statistically worse recovery, Erchul said. The most impacted in Minneapolis were poor African Americans, he said. On St. Paul’s East Side and in Frogtown, north and west of the State Capitol, housing hardships have especially impacted Asian and other immigrants and refugees “who were looking for lower cost housing to start their ‘American Dream’,” he said.

Close by suburbs share many characteristics of the East Side and felt similar impacts from the housing bust and the Great Recession that wiped out jobs, pushed families into foreclosure, and raised rents. Maplewood and West St. Paul median home prices have since recovered a little more than 14 percent from hitting bottoms, Inver Grove Heights has recovered nearly 20 percent from its floor, and White Bear Lake is back a little more than 16 percent.

But there has still been a loss of more than $100,000 in median home values in Maplewood and West St. Paul, and nearly that much in White Bear Lake and Inver Grove Heights.

These aren’t just paper money losses, said Brad Griffith, a St. Paul realtor who serves on East Side neighborhood committees dealing with housing. Families that “toughed it out” and made payments on underwater mortgages cannot get additional loans for proper maintenance and improvements, he said.

This also explains why a large number of remaining empty houses and apartment properties aren’t being repaired and brought back into use. Nonprofit organizations and other community-minded groups can’t sink more money into repairs than the improved property would be worth. That is, not without grant money, which is in short supply.

Thinking on the fly, Griffith said this predicament could be holding back economic recovery for the entire Twin Cities metro area. When immigrants and refugees want to launch new businesses as entrepreneurs, not being able to access home equity limits potential, he said. 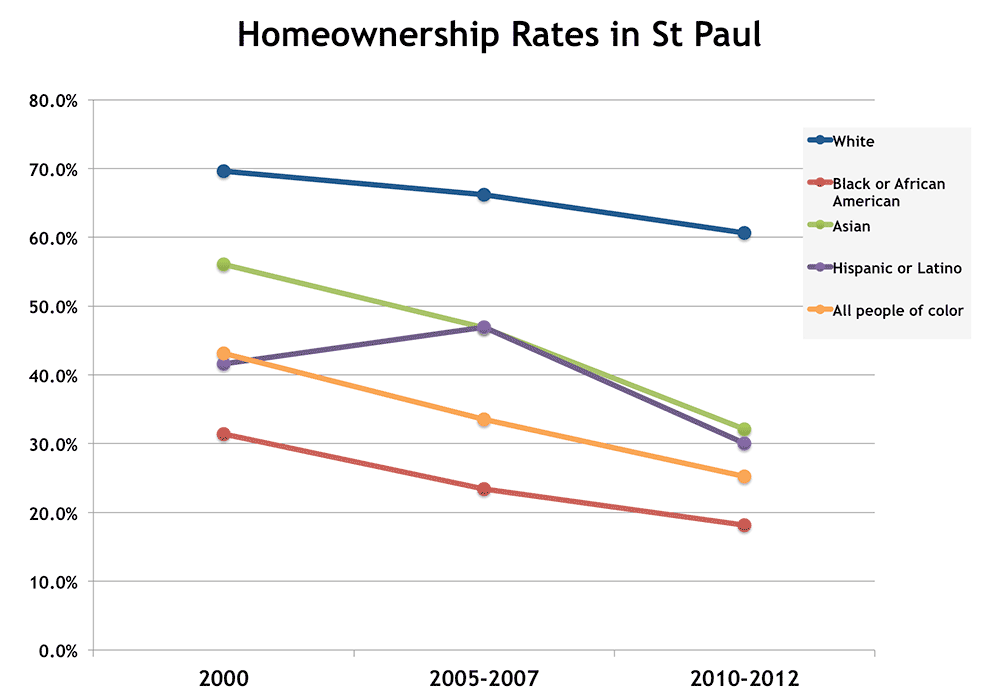 This has had an impact on newcomers to East Side and Frogtown, neighborhoods traditionally comprised of working class immigrants going back 130 years. Today, Frogtown is home to Latino, Hmong, Vietnamese, Cambodian and Lao communities.

Census data show many new East Siders commute to jobs in the suburbs, said Patty Lammers with the Payne Phelan District Five Planning Council. They may later move closer to jobs or buy homes in other metro locations. When this happens, their original homes tend to be re-occupied by new arrivals, who do not necessarily hold the same jobs as previous homeowners or renters. That helps explain why household incomes fall during transition periods, she said.

Meanwhile, individual households are joined by outside investors in buying up foreclosed and abandoned properties, Erchul said. What remains boarded up and untouched is mostly property that can’t be repaired and rented, or sold, for more than the improvements would cost.

This is where future public policy comes in, Erchul and neighborhood housing officials say. Cities and counties will demolish and resell abandoned properties, or they will make public investment in improving the housing stock for neighborhoods recovering from foreclosure. Fortunately, bonding proposals for housing to go before the 2014 Legislature could be used for this purpose.