After the cold, dark winter that lasted more than two decades without a progressive Governor, the last legislative session felt like spring. And while last session was far from perfect, we accomplished something tremendous: our governor and legislature who worked together to build a more fair tax structure, increased aid to local governments while providing property tax relief for the middle-class, we passed all day kindergarten funding, and marriage equality. 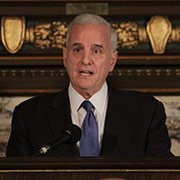 We achieved exactly what we told voters we’d do during the 2012 election: we made our government work better for working people, we championed fairness, and fought for a better Minnesota. It was proof positive of what progressive change can mean if we work together, and it’s thanks in large part to Governor Dayton, his vision and his leadership.

And it’s why we should be disappointed in the Governor’s proposal for the 2014 session, or as he calls it the “unsession.” As Governor Dayton’s website describes it, “The Unsession is a first-of-its-kind effort to make government better, faster, simpler and more efficient for people. We want to improve service, shorten wait times, eliminate old and outdated rules, and undo anything else that makes government nearly impossible for people to understand.”

Here’s what I know for sure: progressives win tough elections when we run towards our values, when we are populist who believe in the power of collective action to make lives better. We lose when we act conservative-light. We win when we talk about what we can do, not about what we can’t.

I also know, from a policy standpoint, the 2014 session is full of potential: from raising the minimum wage, to supporting MNsure and statewide health care access, to lowering the cost of public higher education — we have a lot left to do.

Look, I am all for making government work more efficiently, and I agree that we should make some minor tweaks that eliminate a few of the taxes that passed in 2013. But we have a tough election to look forward to in 2014, and more importantly we have the bold ability to make important progress on real challenges facing Minnesota.

Why on earth would we give up this opportunity to spend an entire legislative session working within the conservative frame about what government can’t do, why it doesn’t work well, how we should eliminate it?

I have a tremendous amount of respect and admiration for Governor Dayton. But he should undo the unsession. He’s making a bad choice. At his best, Governor Dayton is a champion for a fair economy, for working Minnesotans, and for progressive policy. I’d like to see Governor Dayton at his best in 2014.