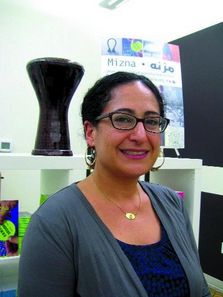 The Arab world is a large one, encompassing more than 22 countries, multiple ethnicities, and many different religions. Few Americans understand its immensity and diversity, and for some, current world events have tainted their view of Arabs.

“The Arab American community feels frustrated by being painted in broad strokes, as a monolith,” said Lana Barkawi, Mizna’s executive and artistic director.

Mizna, a small non-profit organization based in St. Paul, works to dispel stereotypes and misconceptions about Arab Americans. One of its brochures, in fact, bears the tagline: “Beyond belly dancers, bombers, and billionaires.” Its mission is to provide a forum for Arab and Arab American film-makers, writers, and artists. It hosts a yearly Arab film festival, publishes a literary journal, and offers Arabic language and Arabic drumming classes.

This year, Mizna will try something new: co-hosting a national literary conference. Mizna and another Arab American writers group, RAWI, will present the 5th annual Arab American Literary Conference in Minneapolis, Sept. 18-20. The three-day event is open to the public and will feature world-renowned poets and novelists participating in round-table discussions and readings. Friday and Saturday’s events will be held at Open Book, 1011 Washington Ave. S., Minneapolis.

Northeast resident, poet and Mizna founder Kathryn Haddad is one of about 41 scheduled conference presenters. Her plays, With Love from Ramallah, and Zafira the Olive Oil Warrior, have been performed in Minneapolis, New York, and San Francisco.

Other featured writers include Palestinian poet Fady Judah, past recipient of the Yale Series for Younger Poets prize, the Griffin International Poetry award, and a Guggenheim Fellowship; Philip Metres, two-time winner of the NEA and the Arab American Book Awards; and Mohja Kahf, author of the poetry book E-mails from Scheherazad and the novel The Girl in the Tangerine Scarf. Kahf is a Pushcart Prize winner and a full professor at the University of Arkansas.

Barkawi said that in addition to the panels and workshops, there will be two other special events: a movie and an awards ceremony. “On Friday night, from 6-8 p.m. we’re showing the classic Egyptian film, ‘Abi Fowq el-Shajara.’ It’s a campy musical. A lot of us know the words, so it will also be a sing-along. It stars some heavyweight Egyptian actors, such as Abdel Halim Hafez. It should be fun. On closing night, Saturday, there will be the awarding of the new Arab American Book Award. It is a yearly event. The Arab American National Museum is sponsoring it, and sending their representatives.”

RAWI, comprised of writers who serve as the conference’s board members, has sponsored the conference for four years. This conference will be its fifth, and its first time in Minneapolis. Other conferences met in New York and Dearborn, Michigan, home to the Arab American National Museum.  RAWI members chose the presenters, Barkawi said. “We had an open call in the spring. It was not necessary to be an Arab American writer, but your work needed to have some relevance to the conference.”

Barkawi said, “Mizna and RAWI got established around the same time, in the late 1990s. There is a small world of Arab American writers out there: poets, fiction and non-fiction writers, playwrights, and journalists. We also have artists in other genres, such as visual arts and performance, and we all know about each other.”

She said they are expecting between 75 and 100 attendees. Tickets are still available, and may be purchased either for the entire conference, by the day, or for individual events.

Kathryn Haddad originally founded Mizna (which means, in Arabic, “the cloud of the desert”) 15 years ago in her home area of Northeast Minneapolis. The organization now has an office in St. Paul on University Avenue, just east of Highway 280.

“It was not an easy decision to leave Northeast,” Barkawi said. “We like Northeast and Columbia Heights very much. It is the heart of Arab Minnesota.”

When asked what defines an Arab American, Barkawi said, “The definition is kind of loose. It’s how people self-identify. There is an idea out there that there is a firm line, but that’s not true.” The Arab world, she added, includes countries such as Morocco, Yemen, and Syria, religions such as Muslim, Christian, Greek Orthodox, Maronite, Druze, and ethnicities that include the Copts in Egypt, Chaldeans in Iraq, and the Berber people in North Africa.

Mizna strives to present the diversity of the community, she added. “Our mission is to provide a platform for Arab American literature, film and art for Arabs in this country, whether they are new or in subsequent generations of immigrants. It is powerful to have a platform in which you can see your reality reflected.”

In past years, she added, the Heights Theater has hosted Mizna’s Twin Cities Arab Film Fest, an event that has been running since 2003. It is the second-longest standing Arab Film Festival in North America. This year’s film event will be Nov. 6-9, at St. Anthony Main Theaters. “We loved the Heights Theater. Its lobby is so beautiful and owner Tom Letness is so nice. But we thought that this year, we would try a location that is closer to the heart of the city.”

Mizna has been publishing its literary journal since 1999. Its cover reads “Prose, poetry, and art exploration.” Barkawi said that it is the only Arab American journal in the United States. “Mizna is not a political organization, although content in the journal can be political.”

Sometimes, Mizna gets actively involved with artists. She said that two years ago, Mizna members helped two New York playwrights, Lameece Issaq & Jacob Kader, with a play that premiered off Broadway in 2012. Its title was “Food and Fadwa,” (Fadwa is a woman’s name).

Mizna brought in local actors and hosted a workshop production of it in Minneapolis. The actors staged readings and rehearsals for a month.

Issaq and Kader will return to Minneapolis this year for the conference at Open Book. They will participate in a panel titled, “Arab American Playwrights,” on Saturday, Sept. 20, 9 a.m.

For daily passes, go to http://rawimiznalitgathering.eventbrite.com.