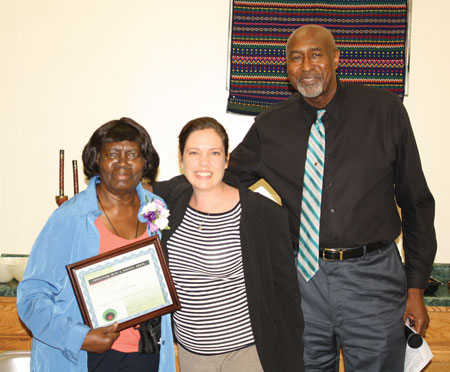 Casoline Norris (at left) and Dave Patterson were presented Connecting with Purpose Awards. Shown with them are Board Chair Shana Zaiser.

Rev. Stanley King and other people of vision who helped found Sabathani Community Center 46 years ago could not have foreseen that the longtime community service nonprofit would someday become the thriving and vital organization that it is today.

Sabathani’s grassroots efforts and vision have for nearly half a century provided a place where residents can gather in a welcoming environment, while promoting fellowship, building community, conducting business and presenting programs and services. The organization with its 40 tenants continues to help move people forward with its own unique generational stamp.

Case in point: Sabathani took a huge leap forward in 1979 when it settled in the former Bryant Junior High School building, the center’s current headquarters at 310 E. 38th St. in South Minneapolis. Last Wednesday, June 27, that was the site of a special annual public meeting and “State of Sabathani Address” delivered by the center’s new executive director, Clyde Turner.

With the emergence 16 months ago of Turner, a former manager of family support services with Ramsey County, people in the community may be wondering: What’s happening at Sabathani now? Many of their questions were answered at the under-two-hours event announced as the first public annual meeting of its kind held at Sabathani in 10 years.

More than 50 people of various ages and ethnic backgrounds braved the 90-degree weather, including board members, Sabathani staff, volunteers, tenants and members of the community, to pack an air-conditioned room and learn out about the center’s strategic plans, the new director, the new board, and how they plan to move the center forward.

The overriding theme was “going from good to great.” Three main things happened at the meeting: There was a kickoff viewing and discussion of Sabathani’s new Cultural Preservation History Exhibit “We Are Sabathani”; there was a discussion of programs and strategies; and there was a presentation of Connecting with Purpose Awards to an employee, a volunteer, and a Sabathani tenant who exemplify the center’s mission and values.

Sabathani programs serve nearly 30,000 people a year. Turner’s remarks during his “State of Sabathani Address” included efforts to address health disparities. Sabathani received $176,000 from the Minnesota Department of Health for reducing health disparities. He pointed to Sabathani’s Health and Wellness Program that includes outreach and exposure to the community as having real potential for creating and expanding a healthy community given the news of the new grant.

Turner also noted the health disparities among ethnic groups here in the Minneapolis-St. Paul area in terms of medical care, insurance coverage and disease rates. In light of the current economic situation, he highlighted some trends that he thinks will continue. 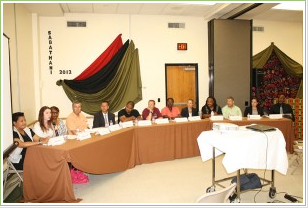 Left: The Sabathani Board of Directors

We are now facing a second and third generation of individuals in poverty. He stated that is a trend we have to break. The African American jobless rate for this region is at 21.4 percent. Highlighting the achievement gap, Turner noted that 45 percent of Black males are not graduating from high school. These are all things he views as important undertakings by Sabathani.

Another key announcement was Sabathani’s recent hiring of Sherrie Pugh as director of operations to handle the day-to-day functions of the center.

Casoline Norris and Dave Patterson were presented with the Connecting with Purpose Awards. Norris has been a volunteer for the senior center for 20 years. Patterson has been head of security for Sabathani for 15 years.

At the end of the meeting, attendees received a free full-color commemorative poster depicting the history of Sabathani from the origin of Sabathani Baptist Church to the evolution of Sabathani Community Center. The storytelling exhibit was presented and organized by Judge LaJune Lang and co-researcher and curator Anika Robbins.

Judge Lang, who spoke briefly at the beginning of the meeting, was instrumental in laying the foundation for the exhibit. She said it was phrase one of a much larger project that captures the history of the greater Sabathani neighborhood, and is currently moving into phrase two so that they may broaden documentation and future viewings.

Judge Lang also brought attention to the art gallery located on the first floor, which features art from all over the world. She considers the gallery every bit as vital as those found in Harlem.

According to Pam Young, development and communications representative for Sabathani, “The collage exhibit at the annual meeting was made possible by a grant from the Minnesota Humanities Center in collaboration with the Council on Black Minnesotans for the cultural and historical preservation of Sabathani Community Center.”

We asked Turner if he wanted to add anything that didn’t come up in the address. “There’s a big development going on with Hennepin County,” he said. “Hennepin County is going to be moving into the building sometime in 2013. They will become an anchor tenant in the building.

“We’re talking about 11,000 square feet of office space,” said Turner. “They are going to bring in more services and programs for families and individuals to be able to take advantage of in this community. So that’s a big development. We didn’t really highlight that that much tonight because we had a community meeting two weeks ago where we focused on that by itself.”

MSR editor’s note: Rev. Stanley King, pastor of Sabathani Baptist Church, initially discussed his idea for a community center with Matthew Little, longtime MSR columnist and then-vice president of the NAACP. He pulled together a planning group that included Harry Davis, MSR publisher/editor Cecil Newman, and contractor Wayne Glanton. Their work culminated in the incorporation of Sabathani Community Center on March 21, 1967. (Thanks to Sabathani’s Pam Young for this information.)