A look at the origins of Minnesotans born in other countries reveals a tapestry of an estimated 339,680 foreign-born Minnesotans from around the globe.

A country of birth table from the U.S. Census Bureau’s Annual Community Survey for the years 2006-2008 reported an estimated 339,680 foreign-born Minnesotans. They accounted for 6.6 percent of the state’s population, and 8.8 percent of the people living in the Minneapolis-St. Paul-Bloomington, MN-WI Metro Area (roughly the Twin Cities metro area). Nationally, 12.5 percent of the country is foreign-born.

Of Minnesota’s immigrant population, 146,976 (43 percent) were naturalized U.S. citizens. They have come to this country steadily over the decades – 36.5 percent entered the U.S. in the last decade, 32.5 entered during the 1990s, and the other 31 percent entered the country before 1990.

The largest populations by region or country of birth were from Southeastern Asia, Latin America (especially Mexico) and Eastern Africa. Below is a breakdown of where the state’s foreign-born residents are from. 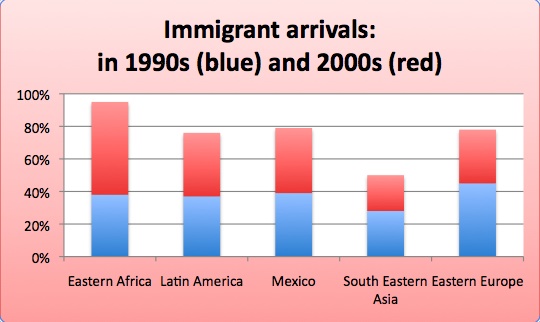 Where are we from?

Eastern Africans numbered 37,695. Only two countries were specified: Ethiopia (11,510) and Kenya (5,704), with more than half (20,481) under the category “other Eastern Africa,” presumably including the state’s large Somali-born population.

Western Africans (16,206) included Minnesota’s Liberian population of 8,235, with another 4,063 from Nigeria. Northern Africans numbered 4,478, including 1,651 from Egypt, the only country specified.

More than half of the state’s Oceania population came from Australia (558) and New Zealand.

Immigrants as a whole, compared to state totals

The ACS data on Minnesota’s immigrants as a whole paint a broad-brush portrait of a population generally on par with the state’s total population, with the following exceptions. Foreign-born Minnesotans were a slightly older group, with more than a third (39.3 percent) 25-44 years old and fewer (10.3 percent) under the age of 18, compared to the 24.2 percent under-18 population of the state as a whole. 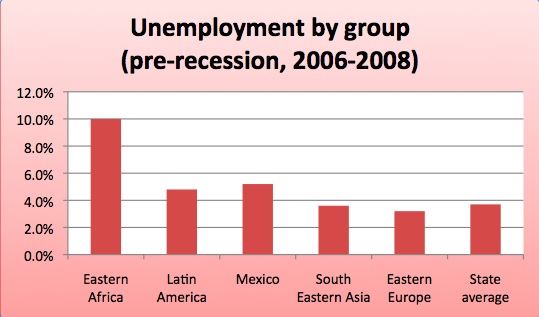 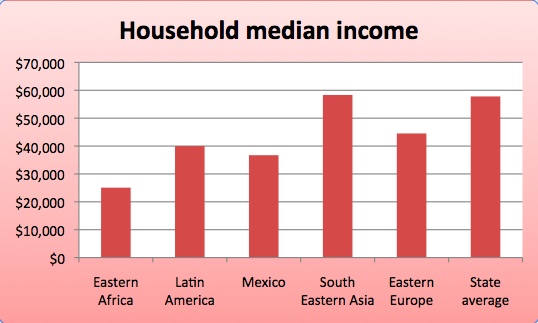 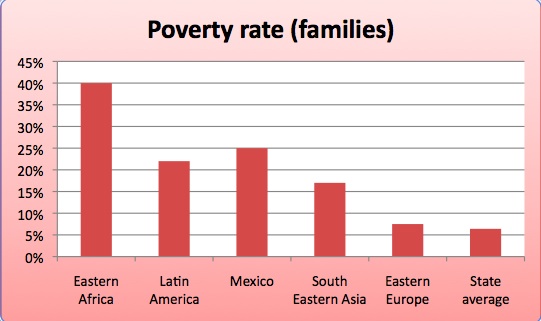 Poverty rates were higher than the state totals across the board, including for all families (17 percent versus 6.4 percent), female householders with no husband present (43.3 percent versus 25.4 percent) and single mothers with children (49.4 percent versus 32.2 percent).

Note on graphics: Statistics and regions were chosen by the author, and data was not available for all demographics.