For most Minnesotans, the Minnesota State Fair means tradition. Who you go with, what day (or time of day, for that matter) you go, and what kind of activities you participate in (Counting mullets? Livestock judging? Trips to the Alpaca booth?) all become an annual ritual—one to savor for a few weeks, and then rehash amongst your friends again and again for the rest of the year. There is, however, one tradition that trumps all others: eating.

State Fair eating traditions can be as rigid and specific as what Sweet Martha’s Cookies stand to get your “to go” bucket from at the end of the night, or the proper eating order of cheese curds, funnel cake, and turkey legs.  However, every year the State Fair throws us a curve ball and offers a new “must try” food.  And so, while every year we stick to tradition, we also swerve for the occasional tater tot hot dish on-a-stick, deep-fried candy bar, or Korean moon BBQ taco.

To better understand my own traditions, I decided this year to write about the eating journey I and the rest of my friends went on.  No one person can try it all in a day, but still, we tried.

Cheese Curds
No other State Fair food, with the possible exception of the pronto pup (discussed further below), is as beloved as the cheese curd.  Deep-fried, salty, but with a

gooey cheese center, the State Fair does cheese curds right.  I choose The Mouthtrap year after year for my cheese curds.  This I do as much for the feeling of being in a mob of people united by cheese, than by anything particularly unique about their cheese curds, which are undeniably delicious, especially when helped out by ketchup.  For me, the cheese curd is always the first food — my State Fair starter — opening my taste buds to the fried-and-sugary promise of food yet to come. 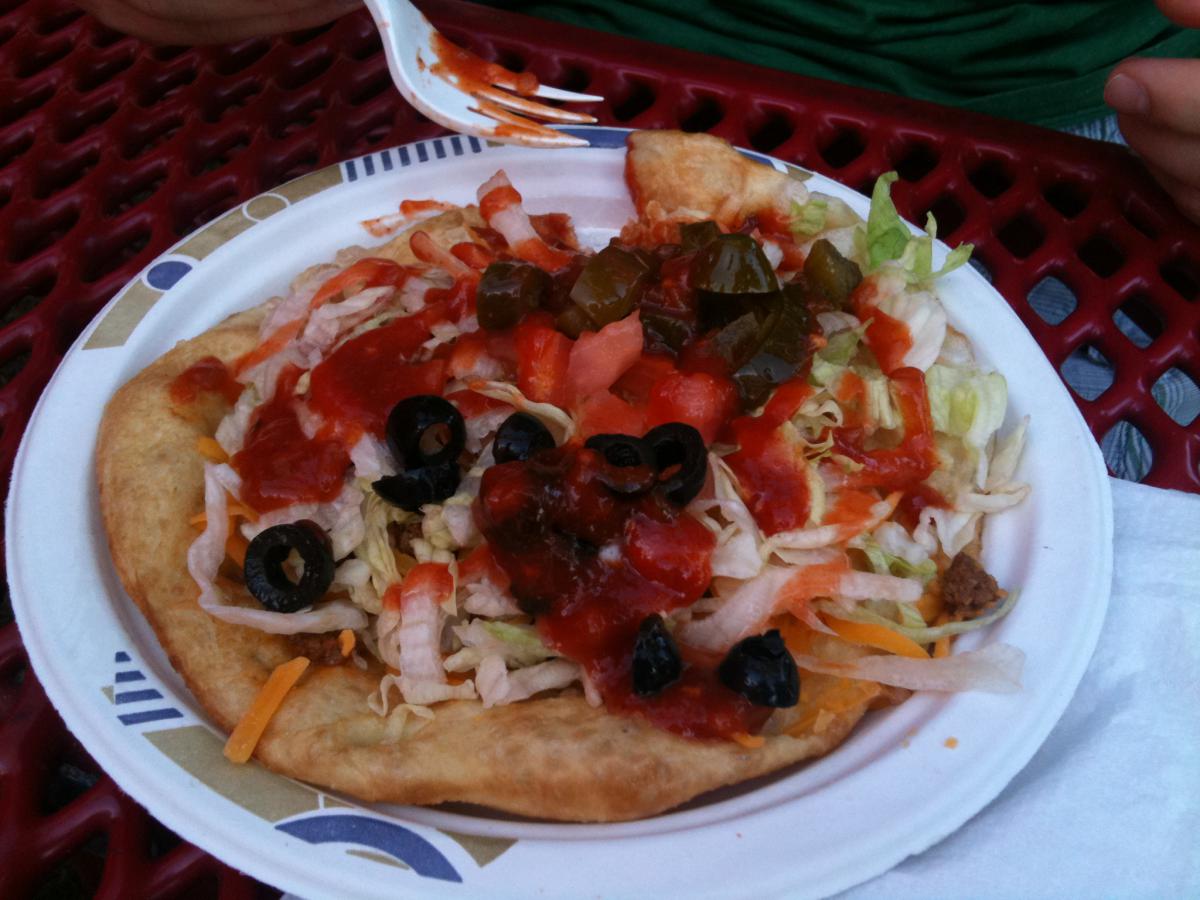 Sometimes, a State Fair starter needs to be a bit more substantial — after all, there is little chance you will hit all your four food groups with most of what you can find on a stick.  For those looking for a more balanced beginning to your day (or afternoon, or evening) of eating, there is the fried bread taco.  Unassuming in name, its shell is obviously not the flour tortilla you may imagine; rather, a flat, fried taco, served open-face on a plate, with a mound of taco fixings greet you, along with a fork, of all things.  Like driving a golf cart to a driving range, this is bound to get you comfortable before you eat so much you get uncomfortable.

Summit-on-a-Stick
Every year sees another “innovation” in food or drink at the fair — many of them novel, but few of them appear ready to stand the test of time.  Enter the Summit-on-a-stick.  A clever take on the State Fair meme of putting whatever you can imagine on the end of a stick, the

Summit-on-a-stick does the impossible — putting a liquid on a stick — by reinventing the stick as a paddle with three cup-holders drilled into it, each cleverly holding a different brew by St. Paul’s Summit Brewery.  While obviously not for the under-21 crowd, this innovation occasion sold out its inaugural year, and seems to be one of the “swerves” that enters our (or at least my) list of State Fair traditions.

One of the foods I had the hardest time understanding as I started going to the State Fair was the pronto pup.  “Why don’t they just call them corn dogs?” I would ask.  Never given a satisfactory answer, I eventually gave up and just started eating them, no questions asked.  They are freshly battered, and thus are much better than the frozen food versions I grew up on.  More importantly, they are the Starbucks of the State Fair — on practically every street corner, with uniform signage all over the fair.  My guess is that there are more pronto pup stands than there are places to throw away the little wooden spear that you’re left with once you’ve finished one.

Gizmo
Never heard of a Gizmo?  Well you’re in good company — the Gizmo stand is not tucked 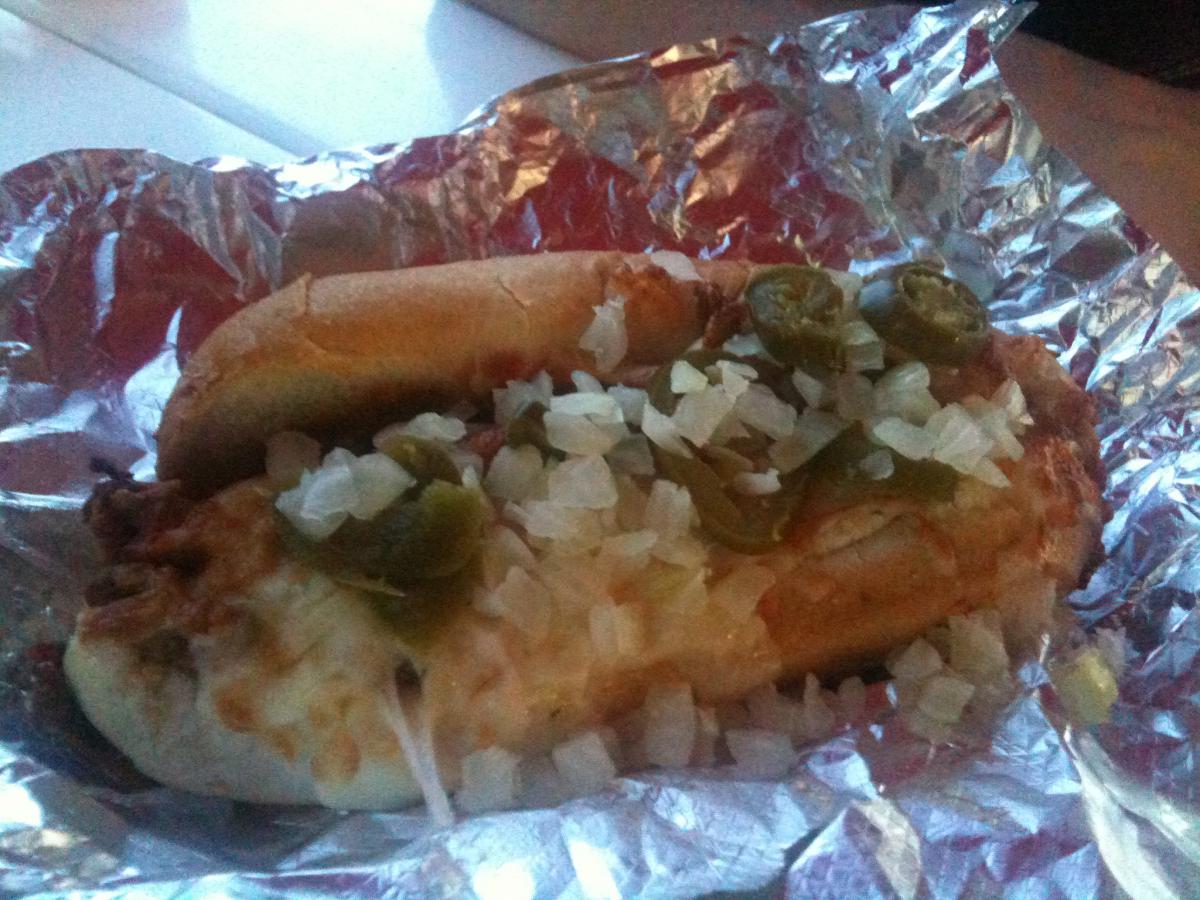 away, it’s tucked way, way away, close to where you get on the chair-lift that runs across the fair.  The Gizmo is a delicious seasoned ground beef sandwich, covered in marinara sauce, onions, cheese, banana peppers, jalapenos, all on a toasted hoagie roll.  It is great, and a little messy — you probably shouldn’t eat it while riding the chair lift.  They make them to order, so if you want to hold/add/double any part of the sandwich, they’re all ears.  While not brand-new to the fair, it’s only been around for a handful of years, and given it’s obscure location, this sandwich has achieved “pilgrimage” status.

You may not be aware of this, but we grow corn here in the Midwest.  If that’s not shocking enough to you, it tastes really good grilled over a fire, too!  Thank goodness that every grocery store, co-op, farmers market, and roadside vendor are trying to get you to buy some this time of year.  Luckily, the folks at Corn Roast want to do it all for you — all you need is one hand to hold the husk-side of the cob, an answer to the (really great) question “do you want butter?” and another hand to salt or pepper the cob to your liking.

I am not one to encourage heavy drinking at the state fair, but for the over-21 crowd,there has been a “buzz” about a drink I had not run across in all my travels — the beergarita.  As the name suggests, it is a margarita-beer hybrid, which was a tonic to my stomach while eating the food I’ve chronicled in this story.  Served at the Tejas stand in the Crossroads Building, the beergarita is best served sitting at one of the many nearby tables, while watching some surprisingly good karaoke singers take the stage.  A great excuse to rest and recharge, before hitting the second half of your eating journey. 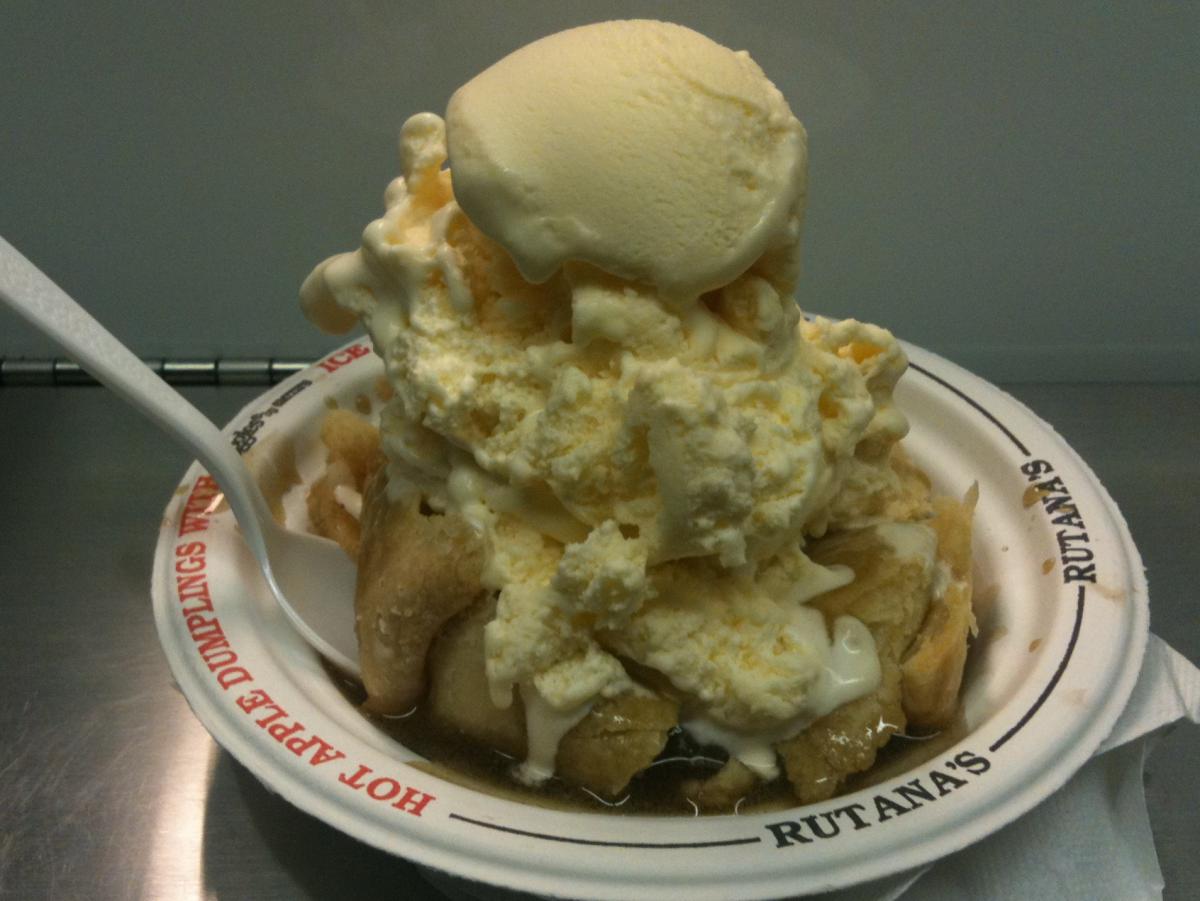 As the day rolls on, my tastes often turn towards the sweeter, dessert-side of State Fair offerings.  On the way in to the Eco building, I ran across something I had not seen before that hit high marks all around — the hot apple dumpling.  Rutana’s hot apple dumpling is something to be seen — and eaten.  Served in a sturdy paper bowl, the apple dumpling is hot, and is covered by an extremely generous dollop of ice cream on top.  Looking back, the ice cream really made this dessert for me — most fair food runs on the warm-side, or at least room temperature, but ice cream, much like the beergarita, helps to settle it all together.

The build-your-own nut roll stand is a simple place — you pick your favorite nuts, they give you those nuts in a gooey carmel/nougat nut roll.  I chose pecan, and was generally happy, but the pecan roll suffers on several fronts — it gets melty, and all the vanilla nougat gets a little overpowering when you get towards the end of your roll.  Best to pair this with something else, or share this with someone else.

Eating a mini-doughnut is like getting a stamp on your passport when you enter a foreign country, or getting a ticket stub handed back to you at a movie or concert that you went to — it is a sign that you have arrived, that you’re in a great place, and something you can hold onto with comfort.  Mini-doughnuts can be found throughout the warm-weather season in Minnesota, at apple orchards, art fairs, and farmers markets, and whenever you have the opportunity to eat them, you should. 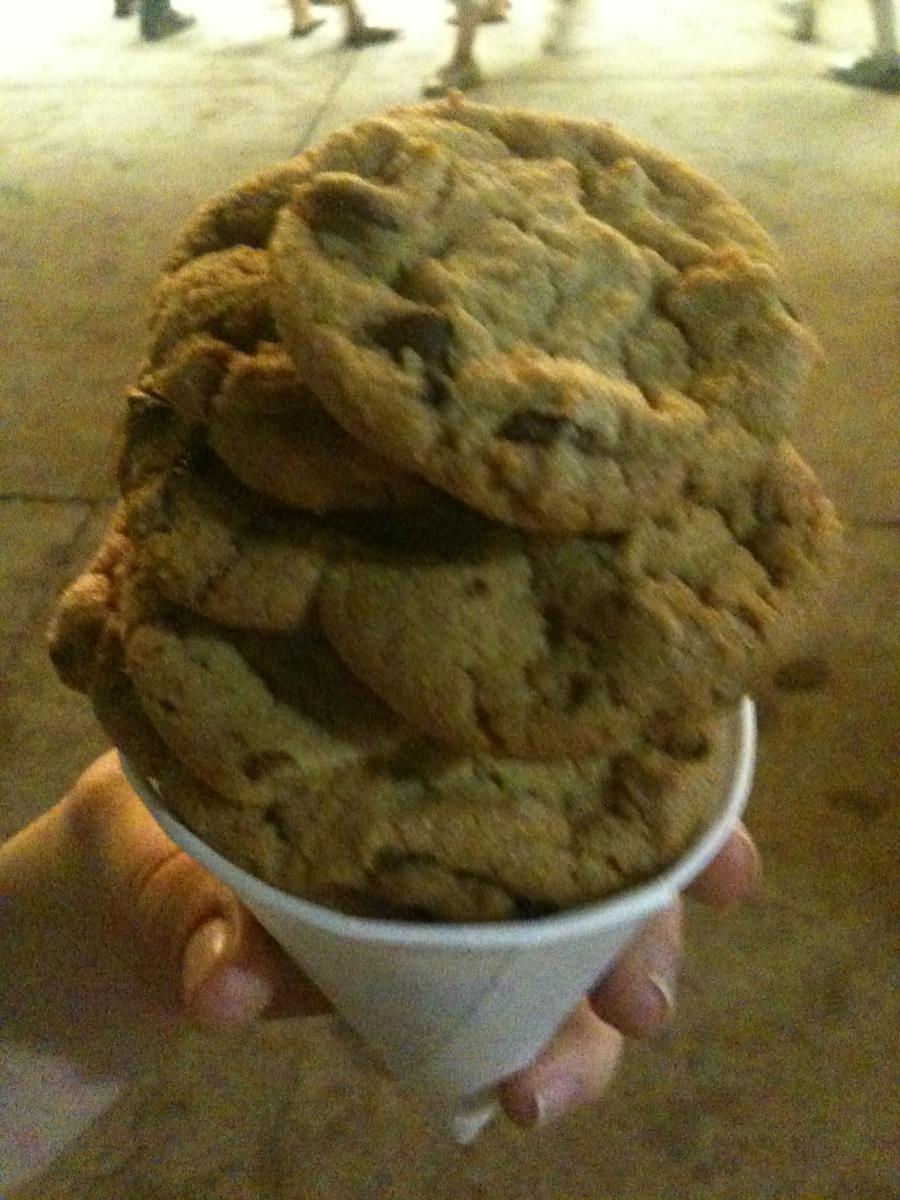 As I mentioned before, Sweet Martha’s Cookies always signify the end of my day at the fair, because who can eat a bucket of cookies after eating everything else?  But a small paper cup’s worth?  That I can work on.  Sweet Martha’s Cookies are always warm, always sweet, and always cookies — I can’t personally attest to Martha’s continued involvement.  They, as much as any other food item, can summarize Minnesota State Fair food as a whole: they taste great, you can’t get them easily anywhere else, and as long as you only eat like this once a year, what the hell?  Eat until you’re full, mark that feeling in your memory, and then eat a little more.  Because after all, it only comes once a year.