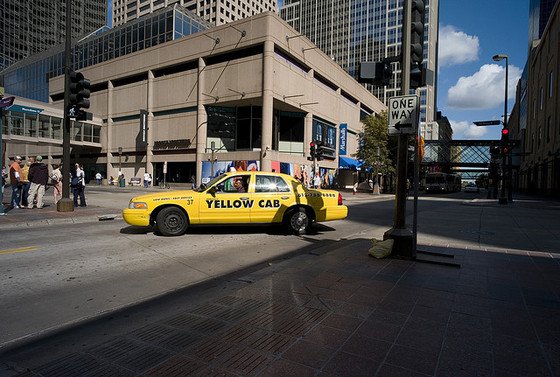 A taxi in Minneapolis; image from City Pages.

Uber, a ride-sharing business that has been in the Twin Cities since October 2012, is protesting a proposed bill that would require its drivers to have additional insurance coverage.
To be exact, the bill would require online ride-hailing companies to cover their business’ vehicles with $1 million insurance policies.
Current Uber policies do not cover accidents in which the other driver is uninsured, but its drivers are constantly at a high risk for traffic accidents — they’re driving in unknown areas while looking at their phones for directions.
However, Mike White, the general manager of Uber, believes the bill would be both unfair and unreasonable, saying it may cost the state jobs. There is now an online petition against it, and many Uber drivers rallied outside the Capitol last Thursday. Officials on both sides are nearing a compromise, but it’s likely this back-and-forth will continue.
Despite Uber’s protests, the bill, which is now out of contention in favor of a different measure, wasn’t unprecedented or out of reach. The required insurance policy mentioned in the Minnesota Legislature is almost identical to the policies that limousine and taxi companies pay. Furthermore, Utah passed a similar bill last week, and Uber announced that the policy was acceptable. It’s a bit hypocritical that the company has suddenly changed its mind because the bill is now in the Twin Cities.
Uber is a great company to have in the Twin Cities — it keeps many drunken drivers off the streets, and it provides safe ways for people to get home. However, it is not out of bounds for the government to request larger insurance policies from Uber.
This bill will not only make customers feel safer but will also take pressure off the hired drivers who, even if they don’t care to admit it, are involved in dangerous situations from time to time.