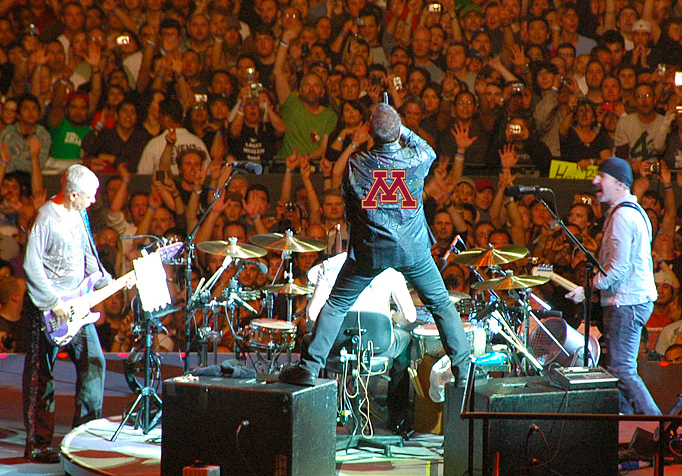 We just parked by a manure-smelling farm field. Welcome to Minnesota, U2.

“I know it’s date night, but you have to know when to sex up the flats.” – @julezrose can’t believe how many women are in high heels

“At things like this, I look around and think, I’ll never be out of work: half of these people need pap smears.” –@nursmadeline

Interpol are invisible to those of us in the cheap seats. Only U2 get 360; openers get 180.

“If Bono’s friend Michael Stipe shows up, I might just have this baby right now.” -@nursmadeline, who’s pregnant (for now)

This “Achtung Baby” stuff still sounds sexy. The stage is having a smoke.

Bono is saying incomprehensible things about world peace. He sounds kind of like Yoko Ono before she’s had her coffee.

Some of these security guards are rather Santa-looking. If shit goes down, I’m not sure what they could do besides take a bullet.

“I Will Follow.” It’s hard to know what exactly is going on in Paul Westerberg’s head right now.

These cheesy video animations would be way cooler if Playatta were at the boards.

Okay, that rain was cool at first, but it can stop now.

This stage is some cool shit, especially in the rain. They just pointed some kind of Batsignal at the clouds, so I expect Bill Clinton will be here momentarily.

The security is being pretty chill about letting people sit on the stairs where it’s dry. I guess they’re not worried about a fire risk.

People carrying Amnesty International luminaries just came out. One guy’s isn’t working. He must be the Antichrist.

This interminable hand-drawn UFO animation will ensure that only the diehard fans stay for the second encore.

This sucky new song will ensure that only the diehard fans stay until the end of the second encore.

“Hello from the SOAKED end of the U2 concert!” – me “Are you soaked in Bono’s tears for orphans?” – Dana