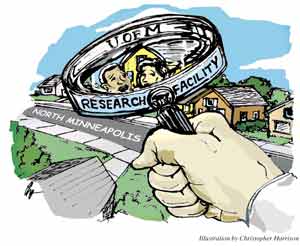 The corner of Penn and Plymouth avenues in North Minneapolis has been vacant for quite some time. Many remember the McDonald’s on that corner or a mini-mall with small minority-owned businesses that once filled this space as part of a major economic corridor. Today, the land has an uncertain future, but the University of Minnesota foresees it as the center of its Northside Initiative.

The Northside Initiative is a collaborative effort that proposes to address the long-term strength and vitality of North Minneapolis by way of education, business and economic development, and health. “The university decided to do their own work and had a desire to have a presence in the community by aligning resources and devising a comprehensive urban agenda,” said Robert Jones, senior vice president of system academic administration at the University of Minnesota.

Jones has been the spokesperson and main communicator for the Northside Initiative. “My office was created to help leverage resources for the community mainly through public engagement,” he said. “The Northside Initiative is part of a plan to become one of the top three institutions in the nation. It helps the university become more strategic in its position. This is absolutely critical… We can’t meet [that] goal otherwise,” said Jones.

This initiative is service-based. “As a public land-grant institution, we have a responsibility to serve,” said Craig Taylor, director of the office of Business and Community Economic Development (BCED). “The University is the economic engine of the state. We’re interested in being an institution that has always supported the communities that make this possible; we have a responsibility to those communities…to reach out and figure out how to better support those communities,” he said.

Who is involved?
The education component is spearheaded by the Center for Early Education and Development (CEED) among other entities such as Educare Minnesota, supported by Minneapolis Public Schools, and the Consortium on Post-Secondary Academic Success (CPAS) created by U of M President Robert Bruininks. “CEED supports the development of achievement for young kids through applied research, training and outreach,” said Scott McConnell, director of CEED.

McConnell is a U of M faculty member in educational psychology, community-based relations and research. “When the Northside partnership emerged, we told Jones about our willingness to be involved,” he said. CEED has a long relationship with child care programs on the Northside including PICA Headstart, the MN Early Literacy Training Project, and the Greater Minneapolis Daycare Association.

The mission of CPAS is to commit university research and expertise to enhancing PreK-12 education. “It addresses the achievement gap issue, focuses on teacher training, and attempts to get parents thinking early about college,” said Jones.

BCED, the City of Minneapolis, Hennepin County and other community-based groups are charged to collaborate on the economic development component. Originally hired as a supplier diversity expert, BCED Director Taylor expanded his office and its services. “Our mission is simple,” he said. “We want to make sure that the University of Minnesota is making an economic impact on Minnesota’s communities.”

BCED had already been working in North Minneapolis before the launch of the Northside Initiative with Northway Trust and its Triple Bottom Line plan to provide technical assistance to emerging businesses on the Northside. “After Cicchetti was hired and it was decided that his work would be focused in North Minneapolis, BCED was a natural fit,” said Taylor.

Child psychologist pioneer Dr. Dante Cicchetti heads the third initiative component: health. Dr. Cicchetti, a developmental psychopathologist, received his PhD from the University of Minnesota and is a former Harvard professor. He responded to a job opening at the University of Rochester (New York), where he developed the work of the Mount Hope Family Center. He was recruited to his alma mater last year to model his work there.

“I am one of the first people in the United States to study how childhood neglect affects the family,” said Cicchetti. His work at Mount Hope allowed him to apply his knowledge by conducting research and treatment. Focus areas include babies abused during year one, toddlers, a therapeutic preschool, home-based programs, after-school programs, and even summer camps.

“My goal was to take kids and families from dysfunction to improvement and evaluate its effectiveness,” Cicchetti said.

“The decision [to recruit Dr. Cicchetti] was independent of the Northside Initiative,” said Jones. Dr. Cicchetti was “priority number one.” After visiting the area, Cicchetti decided to focus his research and treatment efforts on North Minneapolis; linking him with Gary Cunningham at North Point Health and Wellness through “co-location and collaboration” became the second priority.

“After hearing a description and later seeing the area, I thought, ‘Nowhere but North Minneapolis…’ [It] would be ludicrous if it was somewhere else, not as convenient or respectful,” said Cicchetti. “This center would enhance economic growth, and it’s good for the community.”

The Northside University Family Center
The idea to include a family center as part of the project “grew out of the Northside Initiative and conversations between Bruininks and Rybak,” said Jones. “Seemingly, the City and the university had much in common in terms of thinking about economic development, jobs, and educational opportunities.” University officials claim that all plans so far for the development are merely ideas, and that nothing is yet set in stone.

Some of the ideas for the building itself also include “job opportunities, computer space, and an incubator space for new business,” said Jones. “We want to be well-prepared to [attack] issues of poverty, unemployment, education resources, early childhood development… If we don’t make sure [our kids] have resources by the third grade, they will get off track.”

Perhaps the most popular segment of the Family Center for excitement and concern is the mental health portion. “We will not supplant or displace any existing programs. This is a resource that community agencies can apply to improve their services. Everything will not be in one location. Even though the desire is to physically locate the facility in North Minneapolis, it will not be exclusive. [We are] planning for this to become a model process for the rest of the country in terms of meeting the needs of the community.”


Next week: Not everyone in the community is welcoming the proposed facility with open arms.

Public forums will be scheduled regularly for discussion of the Northside Initiative. For more information, contact Gary Cunningham, North Point Heath and Wellness. at 612/302-4600, or Robert Jones, University of Minnesota, at 612/624-3533.