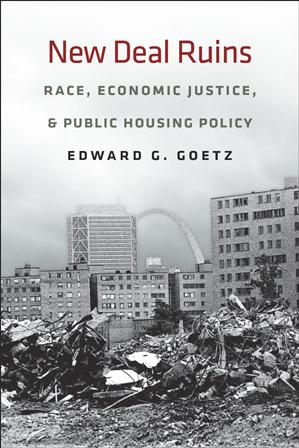 Professor Edward Goetz believes residents have the right to remain in their communities; therefore, he opposes the demolition of public housing.

“These very affordable units are a precious resource at a time when 6 million people in this country face what the government calls ‘worst case housing needs’. We need to preserve these units and the deep subsidies they provide.  In those cases where they need to be modernized or rehabilitated, they should be (rather than being torn down and completely lost),” Goetz said at a March 26 book launch for his New Deal Ruins. The event, at the University of Minnesota, also featured St. Paul Housing Agency Executive Director Jon Gutzmann.

Goetz’s interest in the issue of public housing started with the Hollman consent decree in Minneapolis. The decree, signed in 1995, committed about $100 million for the redevelopment of close to 1000 units on the north side of Minneapolis near downtown.

He conducted a study in which he examined the effect the demolition had on the families displaced and what happened to the site. After that, he never looked back.

In addition, according to Goetz, the one-for-one public housing rule should be reinstated. Until 1995, the law said for every unit demolished another one should be built in its place.

He cites St. Paul as a great example of how public housing can work. He describes it as “a tremendous success” and references lower crime rates as further proof of the safety and stability of St. Paul’s public housing for its low-income population.

“Our policy should be responsive to all public housing residents, not just those who want to move out,” he said.