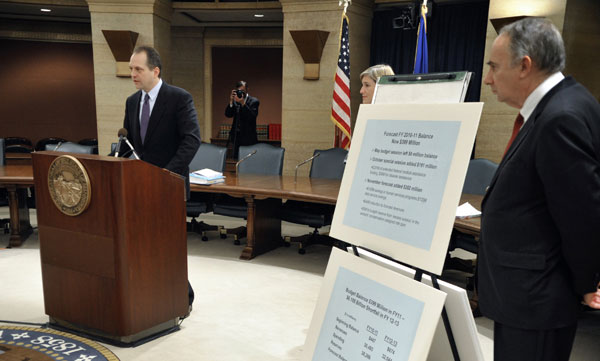 The seemingly perpetual budget crisis that dogged the last crop of state leaders is back to test the new crowd.

The state faces a projected $6.2 billion deficit in the upcoming two-year budget cycle that begins July 1, 2011. Making matters worse, any easy options for bridging the budget gap have already been exhausted, leaving lawmakers with some potentially stark choices this year.

Gov. Mark Dayton and legislative leaders have pledged bipartisan cooperation to address what will undoubtedly be the top issue of the 2011 session. But even with a new group of captains at the helm, some well known partisan differences plot an uncertain course for the ship of state.

“The shoe is going to be on the other foot, from the legislative standpoint, with a Republican Legislature and a Democrat governor,” House Majority Leader Matt Dean (R-Dellwood) said at a press conference Dec. 29.

Last November, voters turned the balance of power at the Capitol on its head, sweeping Republicans into the majority in the House and Senate while electing the state’s first DFL governor in 20 years. The changeover offers a clean start for budget negotiations, but doesn’t change the basic differences between how the two parties approach taxation and spending.

At a press conference following the release of the state’s November Economic Forecast Dec. 2, Republican leaders repeated what has become a familiar mantra: that Minnesota has a spending problem, not a revenue problem.

“We’re going to do as Minnesota families, as Minnesota businesses are: we’re going to live within our means. We’re not going to go back to the taxpayers and ask for more money,” said House Speaker Kurt Zellers (R-Maple Grove).

In the Republican view, the very notion that Minnesota has a deficit is misleading. The forecast predicted a 5 percent increase ($1.5 billion) in tax revenues in the next fiscal biennium. The deficit is caused by a projected 27.5 percent ($8.3 billion) increase in spending. Republicans say that represents out-of-control government growth.

“There’s no way we can do that. There’s no money to do that. We can’t take that money from other people to grow government, even if we wanted to,” Dean said.

DFLers see it differently. They say the budget deficit is very real, and the kind of cuts that would be needed to fix it without adding new revenues could be devastating.

“If you take education, health and human services and higher education, that’s over 80 percent of the budget,” said House Minority Leader Paul Thissen (DFL-Mpls). “If we’re going to close a 16 or 17 percent hole in our budget with an all-cuts approach, you’re going to hit all those things.”

Dayton and DFL lawmakers have called for increased taxes on the state’s wealthiest residents, arguing it would help bridge future budget gaps as well as the current one. Moreover, they argue that without new tax revenues, Minnesotans will only end up paying for the state’s budget crunch in other ways.

“We know that an all-cuts budget like the one the Republicans are going to propose is going to squeeze middle-class Minnesotans with higher property taxes, with higher tuition, with more expensive fees,” Thissen said.

At the Dec. 2 press conference, Minnesota Management and Budget officials pinned much of the blame for the deficit on previous budget fixes.

In the last biennium, lawmakers and former Gov. Tim Pawlenty sidestepped much of the budget crisis by using temporary, one-time solutions. These included delaying payments to schools, making one-time cuts and borrowing from special dedicated funds to help shore up the state’s bottom line.

Voices on both sides of the aisle warned that these short-term actions would only delay the problem and make it worse in the next budget cycle. But with Pawlenty, a Republican, and the DFL-controlled Legislature at loggerheads over a permanent budget fix, they chose the only compromise they could find.

As it turns out, the warnings proved to be correct.

“I think it’s very fair to say that there’s a significant amount of unfinished business in Minnesota,” said Steve Sviggum, interim commissioner of MMB at the release of the forecast.

The problem now for lawmakers and Dayton is that there are no more one-time solutions left. Another federal stimulus bill is unlikely. The state is slated to start paying back the K-12 school payment shifts over the next two years, and few dedicated funds have any spare cash to spread around.

There will be no easy way out this time, according to new MMB Commissioner James Schowalter.

“The bottom line is that the structural problem that we’re looking at for this upcoming budget is not one that we’re going to grow out of. It is one that is going to remain and will have to be dealt with,” Schowalter said.

In addition to the deficit projected in Fiscal Years 2012-2013, additional shortfalls are predicted into the foreseeable future. If lawmakers take a more long-term approach to fixing the budget this year, it could help resolve the state’s structural budget imbalance.

“There’s a significant amount of money – permanently, structurally – that this Legislature and this governor are going to have to address,” Sviggum said.

Whether that involves cutting spending, raising taxes or some combination of the two remains to be seen, but Republicans have already made clear they have no interest in tax increases of any kind.

Zellers said the spending plan Republicans eventually propose will strive to protect funding for programs that protect vulnerable Minnesotans – children, the elderly and the disabled. But Thissen is skeptical.

“Our job as the DFL minority is going to be to hold them accountable for the way that they’re going to govern,” he said.

Breaking down the deficit

Buried in the state’s November Economic Forecast was a perplexing set of numbers. The report stated that even though state revenue is projected to increase by 5 percent, the state would still face a $6.2 billion deficit because its spending is expected to grow by 27.5 percent. How can state spending grow by more than one-quarter from one two-year budget cycle to the next?

Actually, the figures are a little misleading. The 27.5 percent increase represents a dollar amount of a little more than $8.3 billion. Of that, only about $2 billion represents actual forecasted growth in government spending. The rest, $6.3 billion, results from one-time budget fixes that were used in the last two-year budget cycle.

For example, in 2009, the federal government enacted a stimulus package that included “fiscal stabilization funds” to help states balance their budgets. The money helped state leaders avoid potentially painful budget cuts; however, the funds will dry up beginning in July 2011. As a result, the state will have to make up the $2.3 billion difference on its own.

The remaining $4 billion gap comes from the one-time budget solutions used by legislative leaders and former Gov. Tim Pawlenty during the last budget cycle. These included shifting $1.9 billion in school payments into the next fiscal biennium. Part of the agreement called for $1.4 billion of that money to be paid back over the next two years, adding that much more to the deficit. Another $660 million in one-time reductions were made in the last budget cycle that fall back in the state’s lap in the next one.