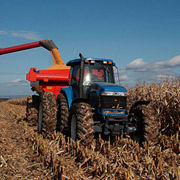 Minnesota farmers have nearly completed the fall harvest and the vast majority can declare victory, “mission accomplished,” or make some similar pronouncement to mark the end of a successful growing season.

A long, mostly enjoyable patio sitting season has ended. Though it was a good summer and fall in the back yard, it still seems too short. That’s the difference between putting away the combine and grain wagons and putting away the patio chairs and tables.

The Minnesota Office of USDA’s National Agricultural Statistics Service said on Monday that 93 percent of Minnesota’s corn crop is harvested when 60 percent is the average progress rate at the end of October. Some sunflowers are still in the field and need finishing up as well. But this growing season is mostly history.

But just as there are political candidates hoping to cash in on a sluggish national economy, and just as there are Wall Street traders hoping markets will fall and rise regularly so investors keep buying and selling, there are two sides to the fall harvest and weather report as well.

The drought conditions over most of Minnesota the last two months made for near ideal harvesting conditions in the fields. The other side of the coin means that topsoil and subsoil moisture conditions are not good for Minnesota’s forestry areas, for homeowners’s plants and shrubs, or for recharging soils for next year’s farm growing season.

Subsequent fall rains and winter snowfall might right matters before the next growing season. Areas around Wadena, in the far northwest, and Faribault, in south central Minnesota, are more than 7 inches below normal in precipitation since the start of the past growing season on April 1, the NASS said. Some areas, such as Alexandria, have had more than normal precipitation through the year, but most of Minnesota is well below normal.

That still doesn’t explain everything. This past spring started on the wet side, delaying farm plantings and keeping urban dwellers indoors and out of the rain. The past two months have seen drought conditions over almost all of the state.

This much we know from statistics: On average, temperatures wll be warmer sometime in April when the patio furniture comes back outdoors.