The City of Columbia Heights is planning for the future of the LaBelle Park area, and with help from Candace Amberg, a landscape architect with Brauer/WSB and Associates, has come up with two “concept plans” for refurbishing the area.

City officials won’t have to choose between the two plans, Amberg said. Based on comments from officials and the public, they will choose aspects of both.

They’re not working on a specific timetable, she said, and will spend the near future “trying to merge the plans” based on which parts of each are the most popular.

“Then we’ll put it out on the [city] web site,” she said, and after another round of public review, the Columbia Heights City Council will be asked to adopt a plan.

The area around the park is very diverse, she said, with many older adults in the nearby condominiums and many children in other nearby residential areas. And, a lot of people in between. “We want to be able to cover all the age groups,” she said, and plans will likely include “a more upgraded children’s playground.”

“We want to come up with a nice overall plan that helps the surrounding area,” she said.

Many people have complained about the water quality in the pond, she said, and improving it will likely be high on the priority list. She said the water quality problems aren’t surprising, as the pond gets a lot of untreated runoff; not only from the immediate park area but from more distant sources also.

Another high priority, she said, is making sure the park’s public areas are safe and in good condition. City officials have had to restrict access to some areas of the park that were open before, she said, because some of the facilities have deteriorated to the dangerous point. Removing them will be “one of the first steps,” she said.

Both plans call for a new playground in the northwest corner of the park, an accessible (less than 5 percent slope) trail around the pond, a new pond overlook,refurbishing the Circle Terrace playground area, cleaning up the landscape to reduce erosion and provide stable slopes for new vegetation, and creating rain gardens or infiltration systems to clean runoff water before it gets to the pond.

How much will it cost? “There are no estimates at this point,” she said. “It can vary greatly” depending on which features people want. Once they have an idea of what people want to see at LaBelle, they can “put some budget figures” together, and that will help “give the city the leverage to prioritize.”

“Then we look for creative ways” to finance the project, she said.

Government and private grant funds are often available for park improvements, she said, “especially for the water quality improvements.”

She said it’s helpful for city officials to work on plans and priorities now, so that when sources of funds for park improvements are found in the future, they will be ready to begin the work. 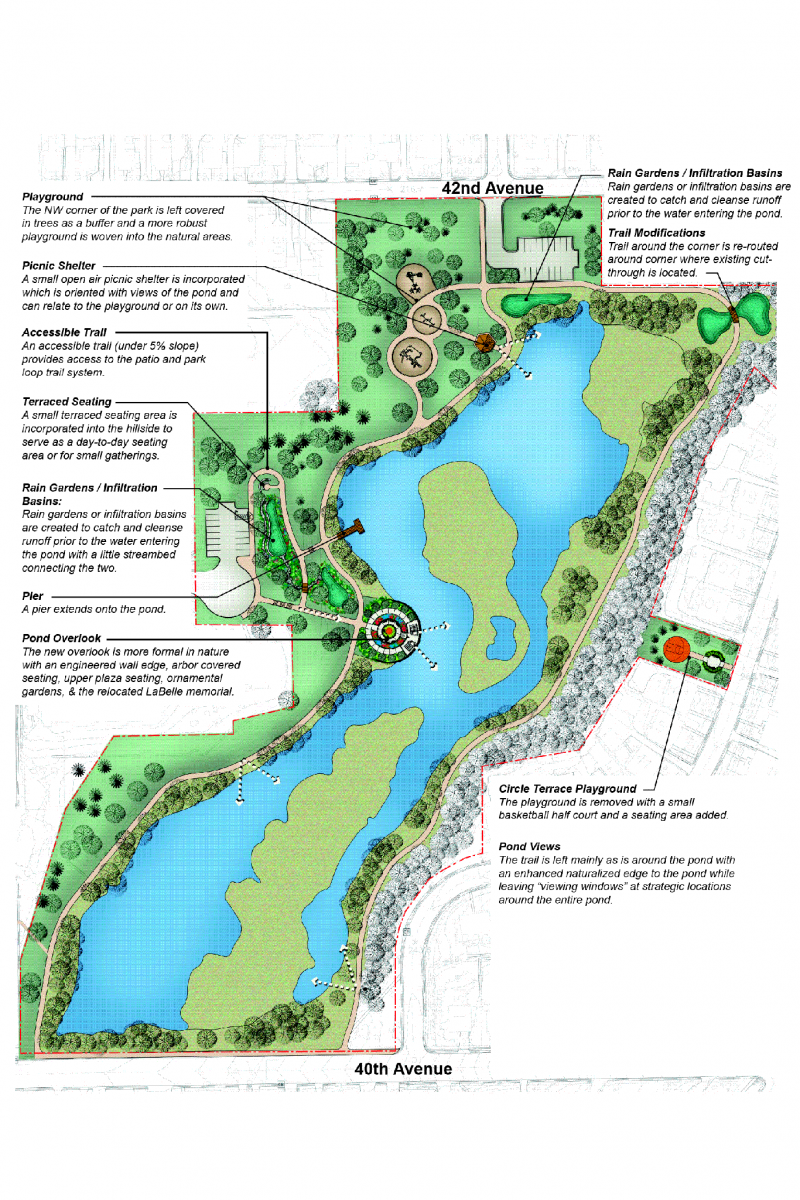