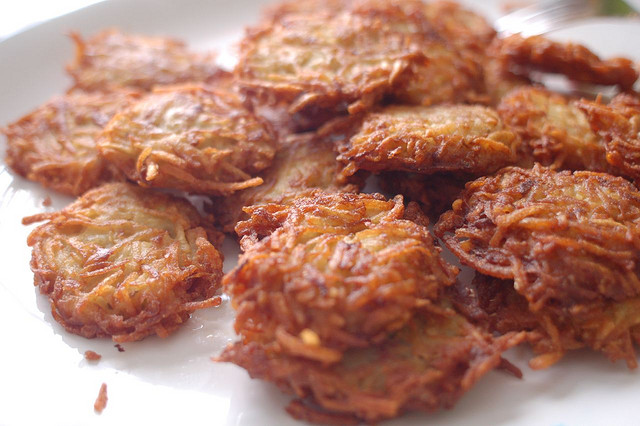 With Hanukkah approaching and our parenting conundrums adding up, it’s the perfect time to look back at what the Festival of Lights used to be – at least for us, The Two Jews on Parenting.

Growing up in Queens with Jews all around me, Hanukkah was far more prevalent than Christmas. Sure every block had a few houses with Christmas lights, but there were many more with electric menorahs in the windows. And without fail in my house — literally EVERY single year — was the question: Do we light from left to right or from right to left? Is it left to right inside while lighting it? Or outside from the street? EVERY SINGLE YEAR.

The actual candle lighting was always in the kitchen — our tiny little kitchen with limited counter space. My mom would put out the “tin foil” and some combination of the “fancy” menorah and the ones my brother and I made out of clay in nursery school. I actually think the clay ones were used until our teenage years. And the candles were the generic multi-colored ones that came in a small blue box. Blue, red, pink, green, white.

I remember always wearing a yarmulke for the prayers. My grandma made the latkes and the whole house smelled for a week. What a good smell that was. I don’t ever remember jelly donuts being a part of our Hanukkah celebrations even though my dad and I love them.

We got gifts, but I don’t remember any theme nights or particular order of things. I do remember Hanukkah of 1980 (or 1981) when we got a family gift, price tag: $149.99. It was the Atari 2600, and life on 80th Rd would never be the same. I think my dad insisted on Space Invaders that first night. I wish I had a picture of our family hovering around the 13-incher in awe of those squiggly lines and amazing music.

I really don’t remember parties — whether at our house or at anyone else’s house. I do remember my parents taking us to Howard Beach to look at the “Mafia houses” and their elaborate Christmas light displays. But I don’t remember ever asking why we don’t have any lights.

Now that’s a perfect transition to Hanukkah in my house in 2012, where I have been relentlessly explaining some of this stuff to our 5-year old. He loves the “Christmas people” next door (the nativity scene) and the skiing penguin. I could be the dad who lets his Jewish son down easy: “You know, Santa doesn’t visit the Jewish kids’ houses.” Or, “Hanukkah is 8 nights long, so 8 times more fun (even thought Christmas now starts on Thanksgiving and lasts for 46 days).” Nah! I went to Target and finally found the Hanukkah section in the back corner behind the clearance items from Halloween. Mixed in with the usual paper plates and fancy Target dreidels, I found LED Hanukkah lights. So in a few days, right above my electric menorah in the window (still not sure which direction to light the lights, by the way) will be an announcement in LED that proudly says JEWS LIVE HERE.

My son will think that’s cool for about 5 minutes. Then we’ll go inside, light some candles (those fancy tie-dye ones of course — always 75% off by the 4th night), and hopefully the house will smell like latkes.

I know I’m supposed to be thinking of the ways the Hanukkah of my youth is different than my kids’ Hanukkah today, but all I can focus on is how similar the Hanukkah of Jeff’s youth is to mine today. We have the same conversation every year about the electric menorah, we light our candles in the kitchen on tin foil, and we do light the menorah Henry made last year in Sunday school. My current Hanukkah isn’t much different than my childhood Hanukkah, which was also a lot like Jeff’s. In fact, the main difference between Jeff’s childhood Hanukkah and my own is that we didn’t get our Atari for Hanukkah. We got ours the way all good South Florida families got one — as the free gift for sitting through a time-share sales pitch.

When I was a kid, my dad made the latkes; he had my sister and me grate all the potatoes. He also taught Hebrew school, and he always brought latkes for his class. That meant a lot of potatoes to grate, and we didn’t have a food processor, so we grated them by hand. This meant that halfway through Hanukkah our knuckles were shredded and bloody. Now I make the latkes, and I use a food processor to shred the potatoes. Every year we invite over a couple of my 5 year old’s friends and my in-laws, and we eat latkes, light our candles, and play some dreidel. After the friends have gone home and the kids have had their baths, we open presents.

The biggest difference between my childhood Hanukkah and my kids’ is that on most of the nights, my kids and I are the only Jews. My husband isn’t Jewish. My in-laws aren’t Jewish. For the first few years, most of Henry’s friends weren’t Jewish. When Henry was a baby, there I would be, leading a room full of people through the blessings, feeling like a token in my house, at my own holiday. And not just in my house. I grew up in South Florida in a community full of transplants from New York and Philadelphia. My childhood was lousy with Jewish friends and family members. Here in Minnesota? Not so much.

It can be lonely, but it’s also big part of why, besides all this snow on the ground, our Hanukkah this year isn’t much different than the Hanukkahs of my childhood. It’s kind of the best kept secret of the interfaith marriage — your partner doesn’t have their own Jewish traditions to compete with yours. Mike’s family didn’t play dreidel with different rules than mine; they don’t have a preference in the sour cream vs. applesauce debate. He has absolutely no dog in the fight over whether to do one big present or eight small ones. Whatever we do that’s Jewish, I get to take the lead and do it my way.

That’s changing, though, and honestly, I’m glad. I loved my childhood Hanukkah, but starting a family is about creating new traditions. Of course, it’s taken some getting used to. For the first few years, I think I over-sold Hanukkah, to compensate, to make sure Henry appreciated his Jewish identity in a month drenched with Christmas wonder. Lately, though, I’ve relaxed. Henry is Jewish, he’s not confused. He has a baby sister now, so he’s never the only Jewish kid around. I let Hanukkah be what it is, which isn’t Christmas. We’ve made more Jewish friends, even found a few in the neighborhood, and our non-Jewish friends are getting the hang of the blessings. My mother-in-law even found a place to buy Hanukkah wrapping paper in S0uthern Minnesota. And my kids’ Hanukkah has a postscript mine didn’t. After my in-laws have come to us for Hanukkah, we drive down on Christmas to help them celebrate their holiday.

And by the way: In our version of dreidel, you ante one piece of gelt into the pot each time you start a new round, my kids do get presents every night (but with the gifts that come from the grandparents and aunts and uncles; only a few of them are actually from us), and it’s applesauce and sour cream. But not in the same bite.

Photo: No knuckles were bloodied in the making of these latkes.